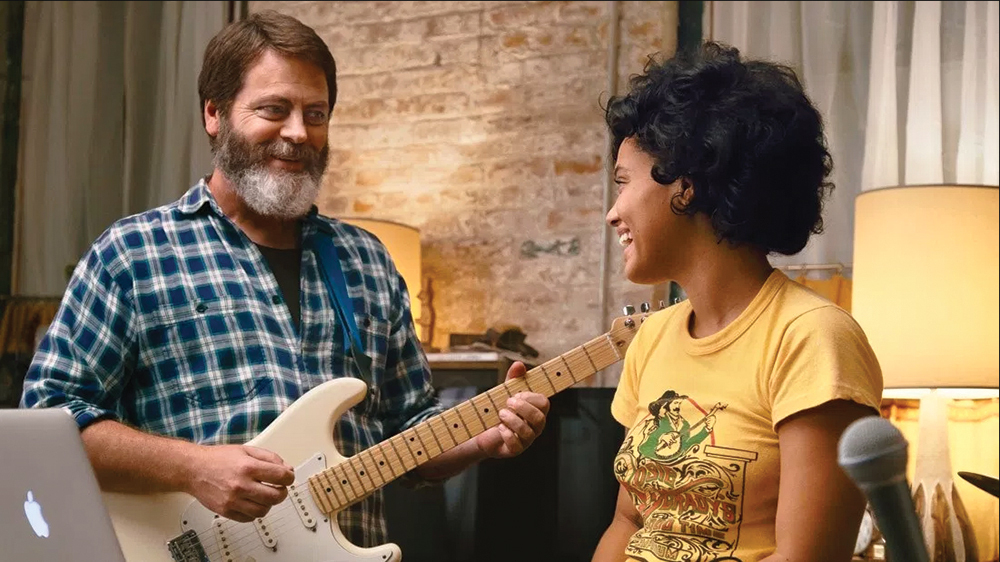 For whatever reason, I’ve got a sudden obsession with seeing my favourite middle-aged actors resurge in dramatic roles that tend to yield little awards season acclaim, but big-time critical applause. Bruce Campbell’s unreleased project Highly Functional is yet to see the light of day and I doubt it ever will. I’ve yet to watch Crazy Heart, solely because I believe I’ll never look at Jeff Bridges again and not see The Dude from The Big Lebowski.

So where else can I turn to for a semi-washed up actor (Nick Offerman) performing country songs? Look no further than Hearts Beat Loud.

The film banks solely on the chemistry of a father and daughter relationship between the ever-enjoyable Nick Offerman and the newly rising star Kiersey Clemons. As expected, there are a few tropes of the drama genre that put some tension on the father/daughter relationship. Offerman’s performance as Frank Fisher, a man on the brink of a mid-life crisis, is his best performance to date. It’s just a shame that he drowns somewhat in mediocrity in regard to how his character is drawn out.

Luckily, it’s not enough to destroy either the character or, more crucially, the pacing of the movie. Hearts Beat Loud enjoys the usual independent movie freedom of having a steady pacing without really doing anything at all. The cliché set pieces of the genre take place, with a handful of forced drama sections appearing throughout, under a guise of creative cinematography and excellent lighting choices. Director Brett Haley seems to have created himself a comfortable niche using the “washed-up crisis” plot-line, with his previous work on The Hero delivering similar results.

Toni Collette and Ted Danson, in what can only be described as two of the strangest supporting roles to date, don’t really add all that much to the movie. Danson is always a nice surprise, while Collette is a charming presence on-screen as ever. Again, it’s a shame they fall into the same pitfalls as the leading cast members. Not enough depth, but enough of a strong performance to hold the majority of it all together.

Full of some fairly weak and moderately bland anecdotes about life, drama and everything you’ve already heard, Hearts Beat Loud is a solid enough movie, held together completely because of Offerman’s leading man strength. The charm of its leading characters and solid direction means it’s easy to overlook the inconsistencies and go head first into this methodical musical medley.