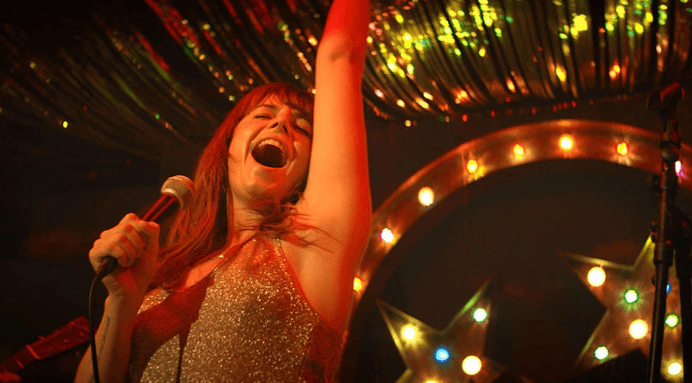 The star-studded dream of hitting it big in the music industry is, by all means, a dream many people have. Not me, but that’s because I know my limits. I’ll live, breathe and die my way through a middling career in and out of writing shoddy reviews like this. Regardless of my ambitions, it’s nice to see that the more creative and unique roles of others are broadcast as drama movies helmed by Tom Harper.

Harper hasn’t directed anything I’ve seen yet however judging by his filmography this is the first movie he’s been given any artistic freedom with. His direction in Wild Rose is complacent, yet has a few strands of originality that really make it stand out. There’s only so many times you can use the “main character walking up a road, looking upset” trope though and Harper rings that dry rather quickly. There’s a scene later in the movie that takes an eagle eye view, and that was visually impressive, Harper just needs to find a more consistent balance between the two.

The leading role of Rose is played well enough by Jessie Buckley. She’s by far the best part of the film, blending that Scottish charm into some great country music. Her singing is superb too, which is incredibly important since there’s quite a lot of singing throughout this movie. I wish her character development had become somewhat more focused though, with a lot of key problems being solved rather quickly, or just thrown in for the sake of eating up an already moderate running time.

Buckley plays well with the rest of the cast, especially the ever-enjoyable Julie Walters. Sophie Okonedo is well cast too but is all but forgotten about in the films final act, until a very brief final scene. The rest of the supporting cast are fairly forgettable faces that you may recognise from the odd TV episode or bit-part in a big budget period piece, but nobody with any real stake in the game just yet. Performance wise, everyone is solid, some really genuine performances throughout that add to the strong realism of the movie. Walters is the only recognisable character.

But the main problem with Walters’ character is that her pacing is very stifled. For someone that just pops in from time to time in the first hour of the film, her prominence in the final act comes out of nowhere, banking on pure luck and just hoping the audience is invested enough to have some sort of emotional connection to the relationship between Rose-Lynn and Marion. It’s your expected family drama, the ups and downs of single motherhood and the stress it puts on everyone around Rose-Lynn.

For all its limitations, Wild Rose is an exceptional and unique drama piece from an incredible cast. Although I’ve now seen the movie, pinned up my cinema ticket on my notice board and written a review, I still can’t remember the title of the movie. It’s unfortunate that Wild Rose will be forgotten, especially since it’s one of the few unique drama movies out there. It’s just a shame it isn’t wrapped up in a neat fashion, it really drags the film out, and the rating down.