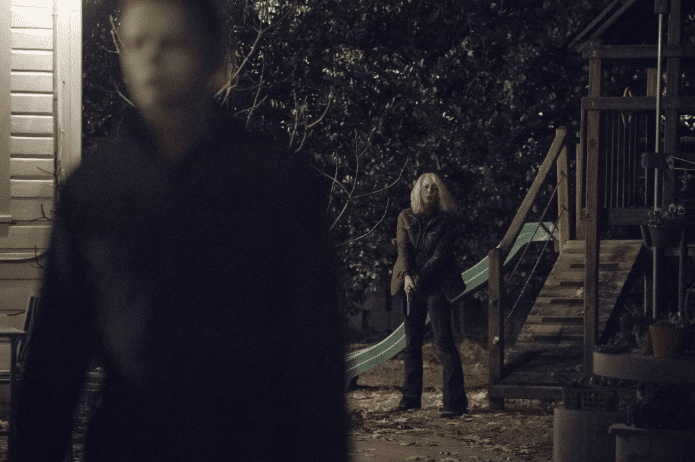 Having not seen John Carpenter’s rendition of Halloween, it felt a bit silly to dive into a reboot sequel series that I’d had little interest for. Even now I’m struggling to think of my reasoning for watching David Gordon Green’s abysmal take on the renowned slasher classic.

Perhaps the main problem of all is the pacing of the movie. Introducing characters and then bumping them off five minutes later isn’t the best way to grow your story or keep it interesting. Unfortunately, Halloween is keen to perform this task often, offing numerous characters of varying importance in a matter of moments. Characters that receive a hefty opening screen time are taken out of action rather quickly when it first appeared, they’d be the stars of the show.

That level of incompetence reigns free throughout all of Halloween, which seeks to reunite Laurie Strode (Jamie Lee Curtis) with the deranged Mike Myers (James Jude Courtney). After Myers escapes from prison in the most impressively dull moment in horror history, he heads back to Haddonfield to begin another rampage.

Casting Judy Greer is more a surprise than a positive choice. It’s not that she’s bad though, it’s sheerly how underutilised she is. I suppose the focus isn’t on her though, with most of the movie focusing on the return of Mike Myers. Unfortunately, he’s not playing his titular Austin Powers character, instead, he’s playing a deranged, rampant murderer who just so happens to escape once more on Halloween night.

Groan-inducing moments like that are frequent throughout, many moments are added solely for shock value, rather than for reasonable plot developments. At times the movie feels like a coy Game of Thrones, offing characters that were both prominent, but underdeveloped. Their deaths leave little impact, only catering to the uber-fans of the slasher genre who just want to see some creative kills. Unfortunately, there are none of those throughout, the majority of the deaths in the movie are merely alluded to or not shown enough to appease those aforementioned uber-fans.

With a script coming from collaborations with Danny McBride, it’s no surprise that Halloween has little to no pacing or weight in its actions. Somehow garnering John Carpenter’s blessing, the newest iteration of an eponymous horror character is as dull as you would expect it to be. Filled with glossy, filler shots and nothing of note, it’s one of the worst remakes of a horror classic I’ve ever seen.