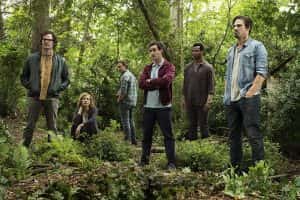 It: Chapter Two picks up right where the miserably mediocre remake left us, only twenty-seven years have passed and Finn Wolfhard has morphed into Bill Hader.

Sequels can be notoriously tedious, and even after the dull presentation of the first, my head was held high in what could potentially be a thoroughly enjoyable horror that brings to life one of Stephen King’s best remembered pieces of literature.
But It: Chapter Two fails to bring even a scent of what made the first film so bearable and the book so engaging. Instead, it falls flat in a concerning trend of awful movies to release this year.

James McAvoy leads a rough ensemble cast that features the likes of Bill Hader, Jessica Chastain and James Ransone. As expected, this resounding group of credited actors fail to give us anything worthwhile.
McAvoy rounded off his year with a trilogy of poor-quality films, starting with Glass and building his way up to X-Men: Dark Phoenix. Everyone has an off year, and it seems like McAvoy is having one of those, as are the majority of performers and directors this year. His performance throughout It: Chapter 2 is a forgettable one that doesn’t give us the best of his abilities. If you’d like to see McAvoy in a thrilling and chilling performance, then look no further than Split, which released just a few years prior.

He leads a pack of mysteriously unoriginal and generic performances, most of which feel out of place or better suited to other genres of film, such as when Jessica Chastain provides a dull romantic triangle which does little to keep us tantalised.
All of this leads to unsurprisingly cliché moments of affection, nostalgia and a terminal case of the “will they, won’t they”.
Ryan, McAvoy and Chastain don’t exactly have enough chemistry to keep this subplot afloat, so it’s up to Hader’s strong performance as Richie to bring the pack together. Unfortunately, relying on Hader alone isn’t fair, and the pressure begins to mount and break his performance down into throwaway comedy moments and nothing more.

The rest of the cast provide nothing of interest in the slightest. Isaiah Mustafa’s role as the fully-grown Mike Hanlon is left on the backbenches under the ever-mounting pressure of big name cast members eating up the running time.
Pennywise the Clown too seems lacking in creepy chills or any form of freakish behaviour. Bill Skarsgård’s performance here is truly underwhelming. What scenes he has are either jump scares or filler plot details that look to advance the story in bumbling bouts of foreshadowing and shadowy corners. He’s not giving us anything natural or garish to look at, nor is the flair of his performance in the first movie anywhere to be spotted. Instead he’s hidden behind walls of special effects and a soundtrack that does more to hurt the movie than its abhorrently terrible writing does.

The scariest part of It: Chapter 2 by far is its $79 million dollar budget. Considering the sheer amount of financing they had, you’d think they could buy a better adaptation of King’s writing. But instead of that we get the usual flashy pieces of CGI, nods to the work of other King classics like The Shining in throwaway cameos that will make die hard horror fans cringe at the sight of them. King himself even appears in a few lines of dialogue with McAvoy, which unfortunately misses out on the best aspects of his own writing. Neither funny nor entertaining, a wasted cameo for a great writer.

It: Chapter 2 is like the first movie, but all tension and thrill are suspended and broken up by Hader’s arguably funny off-key one-liners. Breaking the pace but giving us a couple of laughs, Hader is by far the best part of the movie. But he’s also one of the reasons the movie doesn’t work. Throwaway jokes that break the horror are nice when they’re evenly paced, but here they’re so frequent that the horror never manages to pick itself up. Hader himself is contained within a few scenes built solely for comedic effect, and even though his abilities as a serious performer are something to be aware of, it always feels like it’s in the background to his scripted jokes.

Nothing says horror quite like an unnecessarily amount of predictable jump scares with no atmosphere behind them. The movie feels like it doesn’t have its own unique voice, a problem that can be pinned on the truly meandering direction of Andy Muschietti. He adds nothing to the premise, plot or performances of the movie, you could’ve stuck anyone in the director’s chair and received a similar product. That is, in effect, exactly what It: Chapter 2 is. A film that manages to add nothing to the first in a series isn’t a film at all. Re-treading old ground by consistently flashing back to a more interesting time period, flashing back this constantly, you begin to question why a second film was even made in the first place.