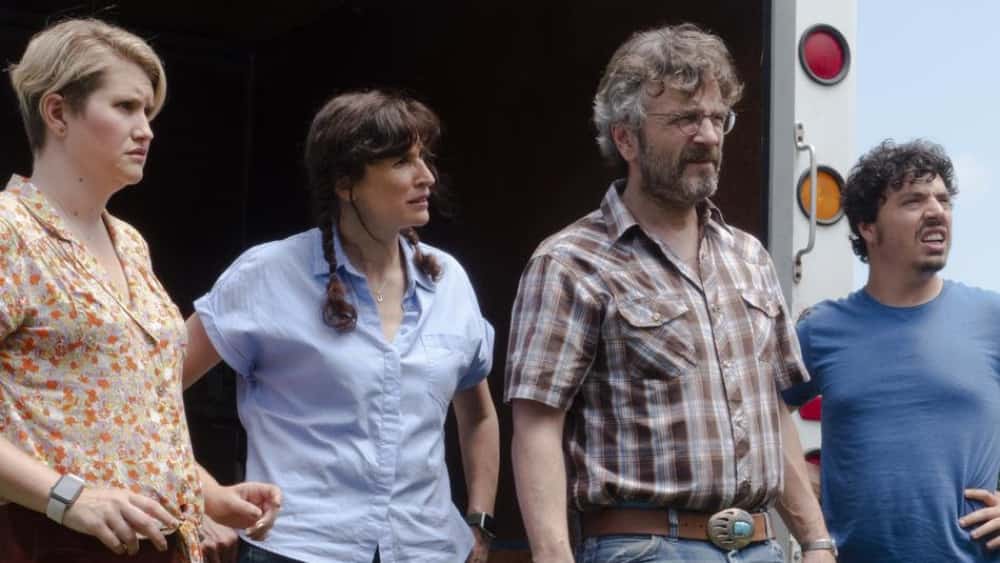 Supporting stand-up comedians as they take their dive from stage performance to leading role is always something I can get behind.
Marc Maron is a great stand-up comedian; his writing is incredibly well rounded and I’ve always thought him to be good enough to make his mark on the movie market.
However, films like Sword of Trust will do nothing for his abilities, since he is given nothing to do. Neither is anyone in this film, it is a film of nothing. A forgettable mess that does nothing for anyone that takes part in director Lynn Shelton’s latest feature film.

Shelton’s latest feature takes us on a tidal wave adventure concerning a sword that proves the South won the Civil War. Maron plays Mel, a pawn shop owner looking to buy the sword from couple Cynthia (Jillian Bell) and Mary (Michaela Watkins), who inherit it from Cynthia’s recently deceased grandfather. The film plays the exact same tone you would expect, following a small group of characters as they begin to discover that not everything is as it seems.

The only issue here though is that Sword of Trust doesn’t have the impactful writing behind it to make it through its running time. We rely on forgettable characters that clearly do not like one another, and that doesn’t change for the entire movie. Movies, especially those of the comedy genre, rely heavily on character growth; no matter how basic it may be we like to know that our characters are moving in the right direction. We get to see them grow into something that they were once ignorant about. But here, there is no growth, and Sword of Trust feels too shy to grow its characters in any meaningful way.

Pieces of comedy within are quite funny, but feel completely out of place with the pacing and tone of the movie itself. There are a few enjoyable throw away lines hidden throughout Sword of Trust, but they feel unkept and littered rather than intentional. There are pockets of good moments throughout the movie, yet they are few and far between. Most of the running time is full of exceedingly mediocre scenes that add nothing to the interest of the film.

It’s nice at least to see that Dan Bakkedahl of Legit and Killing Hasselhoff fame is getting some comfortable supporting roles in light hearted American comedies still. Bakkedahl is a solid performer, and a nice fit into the awkward looking comedian attire. His few scenes in Sword of Trust are well matched with his abilities as an actor, and he plays well with the rest of the leading cast. It’ll be nice to see him appear in something with a bit more meat to it sometime soon, as there’s only so much he can do with a barebones experience, always a pleasure to see him crop up in a film though.

A film full of vaguely recognisable faces, Sword of Trust asks its audience to trust in the abilities of its performers under a shaky script and some consistently mediocre direction. There are glimmers of hope throughout, yet it never amounts to anything solid enough to enjoy. By far not the worst piece of film to come out of this year, but certainly a film that will not be remembered by anyone any time soon.