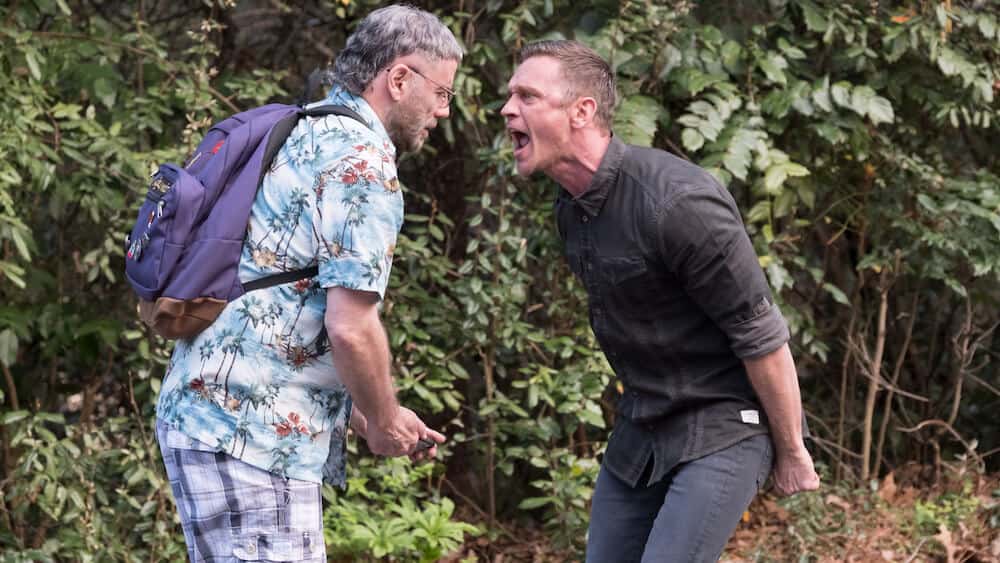 Let’s take a trip down memory lane to the last time John Travolta gave us a great performance in a film. I would join you, although the last film he was any good in came out two years before I was born. A simpler time, when Face/Off was a light hearted action film, one that could show off the overacting abilities yet odd charm of John Travolta. Princess Diana died in 1997, and by the looks of it so did Travolta’s career, and presumably it was just as messy since he’s ended up starring in an oddly concerning film, The Fanatic.

Seeming more like a cry for help than anything coherent or enjoyable, The Fanatic is directed and written by Limp Bizkit singer and songwriter Fred Durst. If that’s not strange enough, he directs Travolta through his third feature film, following Moose, an obsessive fan with the sole goal of meeting his hero, Hunter Dunbar (Devon Sawa), a presumably washed up action hero that struggles with his personal life and the troubles that plague his day to day goings.

It’s awful. So bad it’s genuinely hilarious and an uncomfortable sight to behold. But at the same time, 2019 has been such a horrendous year for film, it feels nice to settle into something that didn’t have me wanting to switch off or leave the theatre part way through. The Fanatic was a gripping experience in all of the wrong ways, it does what no movie should ever do, yet at the same time manages to create a solid enough environment that will keep those that seek this out invested.

Travolta, somehow, gives a solid enough performance. His performance as Moose is certainly on the nose and even a tad tasteless, but he has a few heart-warming and truly endearing moments, along with snippets of real character growth and a couple decent lines. Maybe it’s because the movie feels like we’re watching the real John Travolta have a breakdown on camera. He rides a moped dressed as an English bobby, practicing the word “poppycock” in the mirror as he fixes his fake, twirly, Poirot-like moustache to his face. It’s the scenes of a genuine madman, or a genius, it’s hard to tell with The Fanatic.

What stops this film from becoming more than horribly funny is definitely the writing. Durst was no songwriter, and it’s not that much of a surprise that his jump to film has given us ventures like this. Durst is a genuinely competent director, with some nice use of the camera scattered throughout a film that can look like generic garbage at times. His impressive shots, although few, are as basic as you would expect, however they’re either lit well, have nice camera movement, or are close enough to John Travolta’s face that we can see the fake mullet that has been glued to his bald head.

A film that has jokes about poo and John Travolta stalking a man that’s biggest acting credit is the face of Casper in 1995’s Casper is somehow better than the majority of big budget blockbusters that have released this year. It crashes down in such an entertaining manner that it puts it above snooze-fests like Yesterday and Toy Story 4, yet manages to produce a more competent atmosphere than Tolkein and It: Chapter 2. Somehow, the pairing of Durst and Travolta isn’t a total disaster, which is about as big a praise you can give to a movie that has John Travolta running around with antlers on his head.