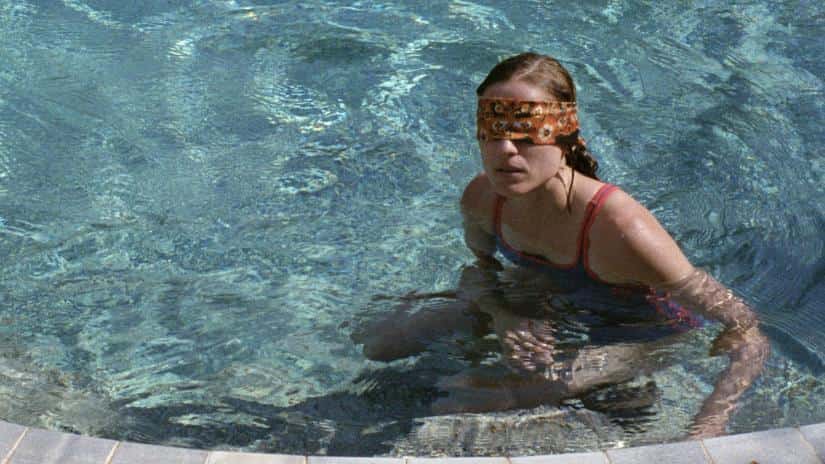 If you’ve seen one Yorgos Lanthimos movie, you’ve more or less seen them all. His contorted view of the world is a stunning showcase of his prowess as a director, and Dogtooth is a prime example of his vision. Thoroughly captivating and eerily enjoyable, the film follows a tight family unit that are “protected” from the outside world by a demanding father, the family leader. With his wife and three children, he constructs a world within a world, forbidding them from leaving the house and spinning a web of trickery and horrifying lies in order to keep them in order under his strict regime.

A nameless family allows us to assume and understand what is presented to us by the cast. The Father is a forthright, controlling man that demands order in his household. Why he treats his loved ones this way is beyond all comprehension, but there are glimmers of familial love here and there. It’s subverted wholly by the prison style regiment he administers with his children, who are fearful but respectful of their father. This dynamic works superbly, and there are some horrifying scenes throughout that bring Dogtooth into the realms of a thriller, rather than a dark drama.

These scenes are intercut with the daily lives of the three children, also nameless in this dictatorial family unit. Some scenes are excruciatingly uncomfortable to watch, but that’s Lanthimos’ forte. He can make an audience squirm but engage with them at the same time, with Dogtooth being the best example of how he does that. Stifled dialogue, tense camerawork and a keen interest in its characters, all the correct staples of a Lanthimos feature.

But this tense nature comes off to an extreme measure, and it’s easy to see why the subject matter and the plot would alienate a fair few cinema goers. It’s chilling and experimental, but that’s exactly what I was looking for. A lot of this comes from the brainwashed nature of the family, their contorted visions and mismanaged minds leave a lot to be desired. Lanthimos shies away from telling us why this is happening, and focuses on the event itself instead.

With outputs like this, Yorgos Lanthimos is swiftly becoming one of my favourite directors of all. Dogtooth is an unremitting and chilling experience that will disgust and intrigue the whole way through. Blending a heartfelt family love with the intensity of a hostage situation, the movie becomes a sombre thriller that highlights all the right tropes of Lanthimos’ direction and style.