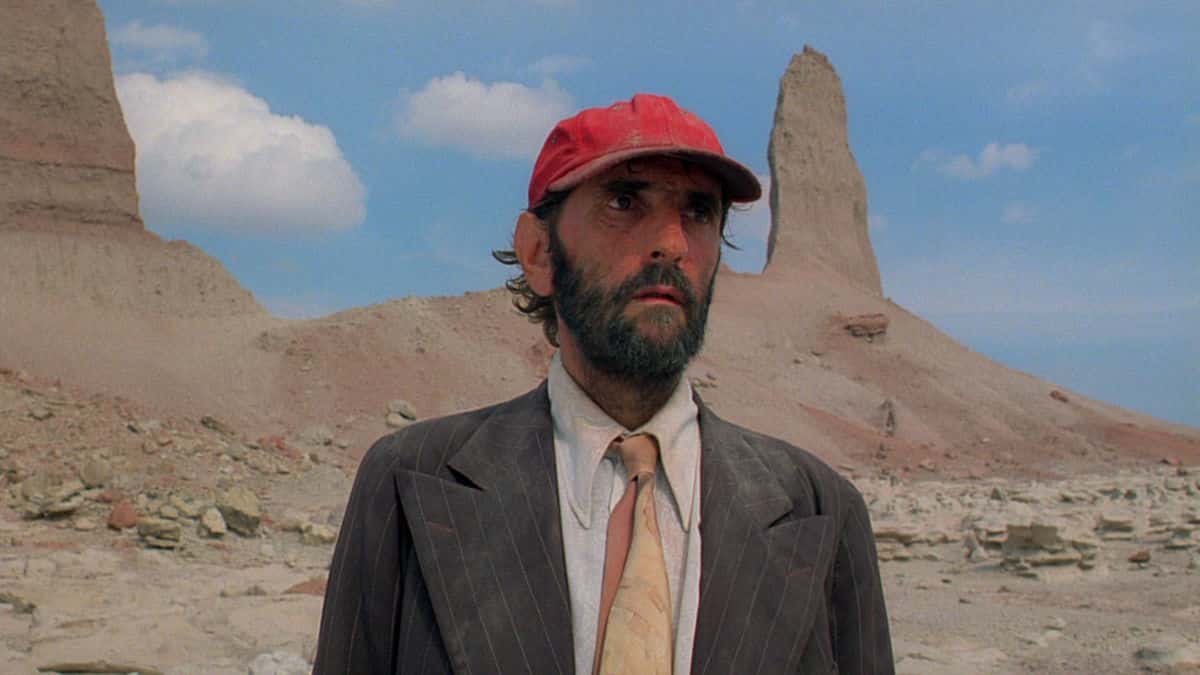 There’s an underlying feeling of blissful ignorance to the world littered throughout Wim Wender’s most defining work. Paris, Texas is a treat for anyone that calls themselves a fan of either Wenders or the long-standing performer and bit-part player, Harry Dean Stanton. A rare leading role for Dean Stanton sees him star as Travis Henderson, a near mute man that wanders the desert. His brother picks him up, but Travis is adamant on returning to Paris, Texas.

Dean Stanton is a tremendous performer, and films like these truly confuse me as to why the man was never given any larger roles. A true shame it is, although the few leading performances he has given us over the years are genuine treats. Breathtaking pieces of art to fall back on when his handful of scenes across some of cinema’s finest movies aren’t enough to satisfy. He performs here with the expected beauty he provides in supporting performances, however when scoped in on for a leading role, he truly doesn’t disappoint. He manages to present a disconnect from reality, and snaps back in and out as he tries to reconnect with a son he walked out on, a son that doesn’t remember him.

This relationship is at the very core of the movie, and much of Paris, Texas relies on the solid supporting performances of Dean Stockwell and Nastassja Kinski as Travis’ brother and sister in law. A search for his missing wife leads him to all corners of Texas, and eventually we get a road trip oriented focus to Dean Stanton’s performance. He’s resounding, a real tour de force in a film that thankfully knows to focus in on such an incredible standing. His spot in the limelight does harm the supporting players though, and outside of Stockwell’s solid opening half hour, we don’t see much of him after that. He becomes a forgotten piece of scenery, as does everyone else in the film.

Still, maybe it’s due to the sheer length of the film that these characters begin to become more forgetful than anything. Wim Wenders’ direction is a talented spectacle, but one that drones on for too long when his story cannot fill such a window of time. There’s only so long you can dwell on a missing wife or a lost cause, and two and a half hours is more than enough time to do so. A film that feels like it could do with a trim isn’t a lost cause though, and the first hour of the film has some tremendous build to it. Wenders’ near silent direction as we follow Travis walking through the plains of Texas is mesmerising, but can’t save the film from its lacking final half.

A solid enough piece of film that verges on greatness, but shies away from it at the last moment. Paris, Texas is a tremendous effort from all involved, providing us with a great Dean Stanton leading performance and a showcase of just how tremendous a director Wim Wenders really is. It’s always a nice treat when a film of this calibre can still hold its own thirty-five years later.