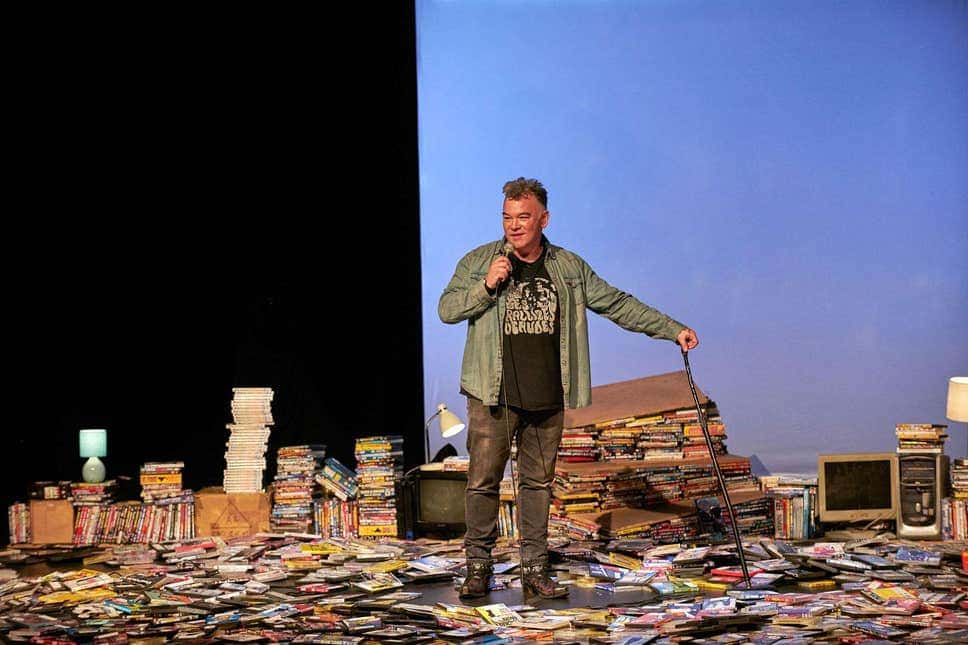 After discovering Stewart Lee, I had an inkling to check out some of his other works. Jumping from his first piece of work to his most recent and relevant certainly seems like a good enough way to get a feel for the range of stand-up he may provide me. Intercutting his stand up with a strange interview piece with Alan Moore, Stewart Lee: Content Provider is a great and ambitious set that manages to highlight how and why Lee is one of the best working comics today.

“I’m not doing this routine. I have high blood pressure”. That quote may show you how uncoordinated and random Stewart Lee’s latest stand up special may be. The sheer velocity of his on-stage actions is enough to carry him through an enjoyable two-hour set. He berates his audience, who have the audacity to show up to his work on this particular taping. Maybe it comes off as mean to some, but it’s hilarious to be outside of that spectacle. Lee is one of the few comedians out there that will speak to his cameras, and the direction from Tim Kirkby is great. So far Kirkby has directed one of the worst films of 2018 but also one of the greatest stand up sets in the form of Jim Jefferies: Alcoholocaust, so he’s a certainly mixed bag.

Having some form of psychotic breakdown in the second act, Lee brings us a lengthy piece of work that aims to criticise as much as possible in such a frankly short timeframe. It works well, with his erratic performance leaping from depressed complaining to mocking an entire generation of people that are probably stuck in the audience, uncomfortably laughing at their own stereotypes. By the hour and ten-minute mark, it’s clear that Lee has had a fully-fledged psychotic breakdown, pulling his trousers down and kicking DVDs of other stand-up comedians around the stage.

Lee troops on through some hard hitting and enjoyable content. A tour lasting eighteen arduous months seems to have had an impact on the mentality of Lee, as he threatens his audience with the microphone stand. It’s an incredible set that goes off on tangents far too much, but it’s still enjoyable when Lee manages to pull it back into his scripted material. It’s a little sad to see though, with Lee describing himself as “I am road-worn and shapeless, a 50-year old man shouting and running around in an undignified fashion, a relic revelling in his own irrelevance.” Nothing could be truer, or funnier, than that.