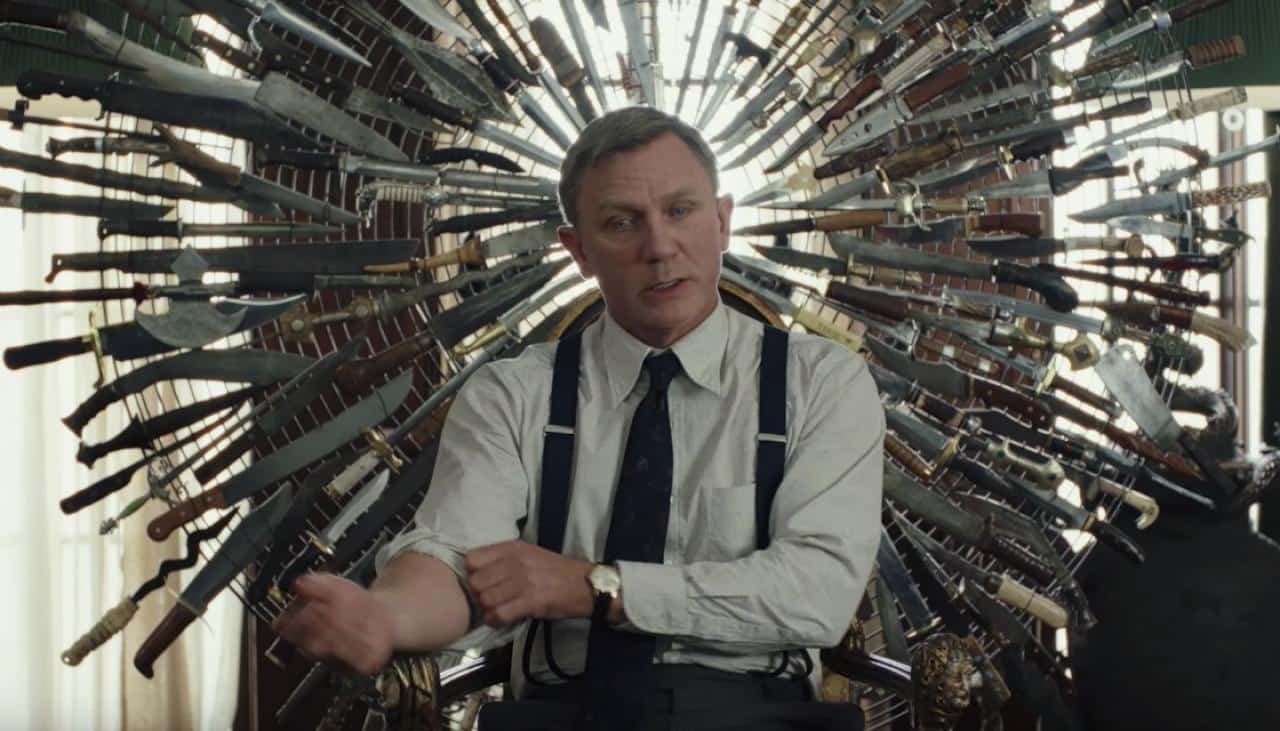 The unsung fun of a tight murder mystery cannot be faulted when tied together in an impressive manner. Dormant lies the genre, just waiting for someone to inject new life into it somewhere down the line. It can happen, The Hateful Eight and Bone Tomahawk proved you could still get a kick out of the age-old Western genre, so why not the suspenseful arc of the simplistic whodunnit? Director Rian Johnson looks to find out in his latest feature film, Knives Out, a superb piece of the mystery genre that leaves its mark with a dedicated ensemble cast and a suspenseful tale of murder and motif.

Daniel Craig stars as Detective Benoit Blanc, a private investigator called in to aid the investigation of a seemingly open and shut suicide case. The death of Harlan Thrombey (Christopher Plummer) leaves the detective bewildered and his family hungry to receive the news of his will. A mesmerising cast star alongside Craig, including veterans of the screen like Jamie Lee Curtis, Don Johnson and Michael Shannon, as well as up and coming stars like Chris Evans, Ana de Armas and Lakeith Stanfield. The cast is one of the biggest hooks of the film, and with this much talent on display it’s no surprise that we’re in for an inventive and twisting ride.

Managing to convince me that he can somehow pull off a western style Kentucky accent, Daniel Craig provides us with one of the best performances to ever slither out of his star-studded career thus far. It’s nowhere close to his suave Bond outings, but it’s leagues above his appearances in other crime capers like Logan Lucky. His role as Benoit Blanc is an incredibly intriguing one, a piece that starts off first as the eyes we as an audience can look through to receive a wider perspective of the murder. He soon develops into more than that though, more of an asset kept away from the truth rather than someone who is actively involved in the case and on the right track.

We have your expected ‘this is how they did it’ scene slapped in right at the end of the movie, but thankfully the delivery of Craig carries us through this cliché of the genre with surprising highs. For a film in the category of the murder mystery, there’s surprisingly little murder going on. Johnson’s direction relies more on the element of surprise and sinister motif, rather than cold blooded murder. I suppose that’s the point though, with nobody to knock off the suspect list, it only makes sense to keep these valued performers alive and see where they can take their embitterment and strong performances.

For me, Michael Shannon will always be the show stealer. He’s a superb actor and I would dare to call him one of the best and most reliable working actors to this day. His role here as Walt Thrombey is a delicate piece that manages to give us just about everything Shannon is capable of providing us. He provides narcissism, anger, gentile touches and flourishes that paint a picture of a wiser man behind a façade of a blithering moron. He shares some great scenes with de Armas later on in the film, and from there it only gets better and better.

The rest of the cast are equally as stunning; however, I did expect more to come from the likes of Jamie Lee Curtis and Don Johnson. A simple issue of too many greats all trying to provide something worthy and relevant. While some stick out like a sore thumb, others are lost to the better performances. There is no real bad performance within Knives Out, just those that are less captivating and pleasing as the likes of Craig, de Armas and Shannon. The trio stand out in just the right way, it puts leading cast members like Chris Evans to the backbenches, which isn’t always ideal.

Better still though is Johnson’s direction. Not entirely convinced by his previous works, Knives Out puts to bed any doubts I had about his efficiency as a man working the camera and movement of his cast. Brick never cast any real issues but came out as a bland piece of film, Looper was a shaky yet solid piece of time travel drama, and The Last Jedi gets a lot more hate than it deserves, although it was still a mediocre piece in an underwhelming trilogy. Knives Out is by far his finest piece of work, and it also provides us with one of the few highlights of an otherwise grim year for film. Sometimes it’s nice to step back into a reliably old and dormant genre, giving it the dust off it needs and the cast it so desperately craves. A real whodunnit with the tantalising highs you’d expect from only the finest in the genre. It’s a smart movie, a piece that will leave you guessing who the murderer is until the very end, and that’s a hell of a lot harder than you’d think.