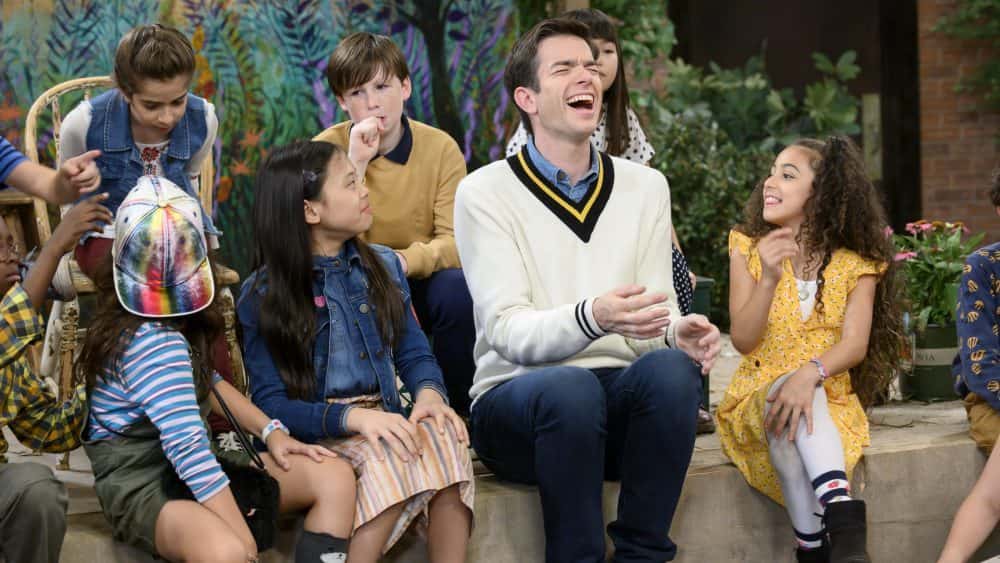 I’ll shamelessly admit that the only reason I had any interest in John Mulaney’s new Netflix special, John Mulaney and The Sack Lunch Bunch is because David Byrne makes a brief appearance. After viewing the quite frankly merciless and soul sucking Cats, the last thing I needed was yet another musical number, no less from the studio powers over at Netflix. Thankfully, the inclusion of Mulaney, Byrne and even Jake Gyllenhaal provides us with some light hilarity to close out the year.

Mulaney is on top form, writing his way through some hilarious scenes peppered throughout his frankly concerning portrayal of a children’s television host. He suits the role well, his sweet form of irony and false empathy towards the children brings a layer of irony looking to bring criticisms to the likes of Sesame Street and Blues Clues. A satirical take on the era of Saturday morning entertainment, with the waning days of such entertainment plaguing my upbringing, it’s nice to see that Mulaney hasn’t forgotten the horrors and tropes of this brief flutter of weekend television. He hits the nail on the head with his presentation of glossy, cheery morning shows that would provide filler between the adverts and re-runs of cartoons.

What is frankly impressive is the blend of tightly written musical numbers that provide a toe tapping beat with a generally enjoyable touch of comedy to the lyrics. Byrne is utilised within one or two segments, as is Mulaney, who mostly provides a few background touches to a song about how learning algebra will stop you from losing your eye. With music videos mocking conventional musical tropes, and the song “Do Flowers Exist at Night” a mockery of the wishy washy 90s videos that consistently dragged certain songs through the Top 40, the craftsmanship of the songs is by far the strongest aspect of this Netflix special.

Including Gyllenhaal as “Mr. Music” proves something I had always thought, that the mental state of the man is ruptured. He’s only in the special for a brief few moments, (a common trend among the guest stars is that they only feature for brief snippets of time), yet his performance here is better than most of the roles he has offered us in the past few years. He brings the show to a close with a performance that is without a doubt worth sticking around for. Something about the zany and quirky style of comedy here works with Mulaney and friends at the helm, he has the right energy to bring together believability and relentlessly absurdist comedy.

The musical comedy and timing that Bo Burnham wishes he could plate up for us through his cringe inducing crap rap. John Mulaney and The Sack Lunch Bunch has all the makings of a sketch show, and its loose structure leaves plenty of room for this musical comedy to take flight at just the right times. Seasoned with guest stars and an enjoyable spin on the stereotypes of children’s television, John Mulaney manages to impress once again in a wholly enjoyable piece of comedy.