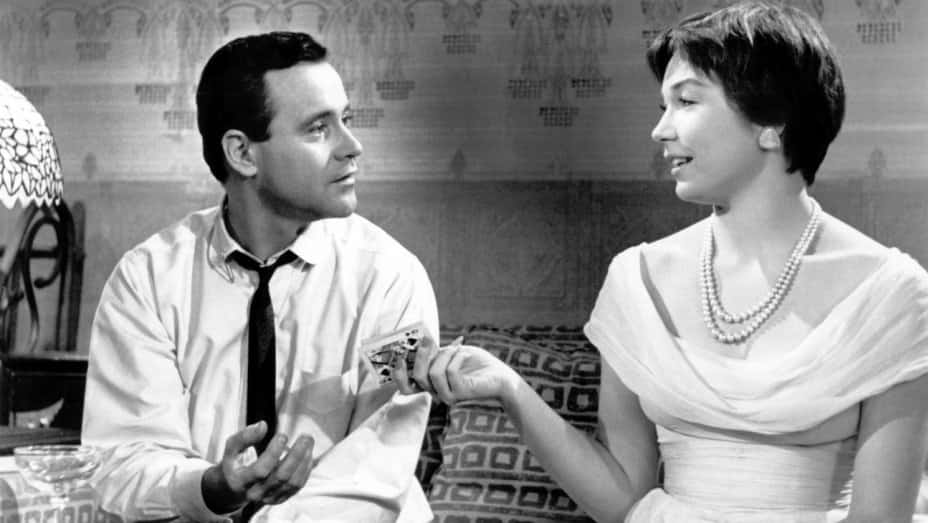 How someone can look at The Apartment and not think of it as a brilliant piece of cinema is beyond the realm of plausibility. Starring the ever-impeccable Jack Lemmon as C C “Bud” Baxter”, a tenant who lets his apartment out to peers at his office so they can continue their extra marital affairs, Baxter finds himself falling for Fran Kubelik (Shirley Maclaine), the elevator girl in his office building. But this is the beginning of the 1960s and a whole new styling of film, so romantic comedies are no breezy affair, as Baxter and Kubelik soon find out. The Apartment offers up some excellent performances and can brandish the title as one of the all-time classics proudly and boldly.

My frequently growing love for the inclusion of Jack Lemmon’s erratic and nerve induced performances grows with this leading performance. His work on the whole so far has been nothing short of incredible; his stints in Glengarry Glen Ross, The Odd Couple and The Front in particular have been wholly incredible. His role in The Apartment joins the ever-growing list of dependable performances that provide us with such a unique charm and spectacle. Lemmon is essentially the core of the film, no other actor could’ve given such a commanding lead performance, both tying the film together in an orderly fashion but also staying out of the spotlight enough to bring some nice depth to the supporting characters.

Fred MacMurray plays a solid enough antagonist of the piece as Baxter’s conniving and slimy boss Jeff Sheldrake. Even the words I use to describe and review this film, I can feel the vibes and allusions that the 1960s brought to film. The expected lovers’ rivalry, with the good guy coming out on top right at the very last second, an impartial farewell to the villain preceding it. These feel good moments of triumph are often left until the bittersweet end, and The Apartment soon feels more like a steely eyed, grimaced expression than a feel-good exploration into the light hearted dramatic genre. Lemmon sells this situation well, his sighing and desperate antics leading us through a variety of great scenes under director Billy Wilder.

The late, great Wilder conducts one of his finest movies to date. He intrigued me with Sunset Boulevard, yet it’s The Apartment that finds level ground with a broader and much more interesting topic. It may feel like a generic romantic piece at the start, but the performances within are what sells it as so much more than that. Beautifully restored and released by Arrow Academy, I doubt The Apartment has looked quite as incredible as this before.

The Apartment is a somewhat feel good movie that burrows into its nitty gritty details early into the film. For a good portion of the film, our relative support for Lemmon’s leading character comes from wanting him to succeed. Eventually, the rooting of our support grows into an affluent love for both the performer and his performance, he’s an essential component to why The Apartment works so well. Pairing that with the incredible efforts of Wilder’s direction and you have a real treat on your hands.