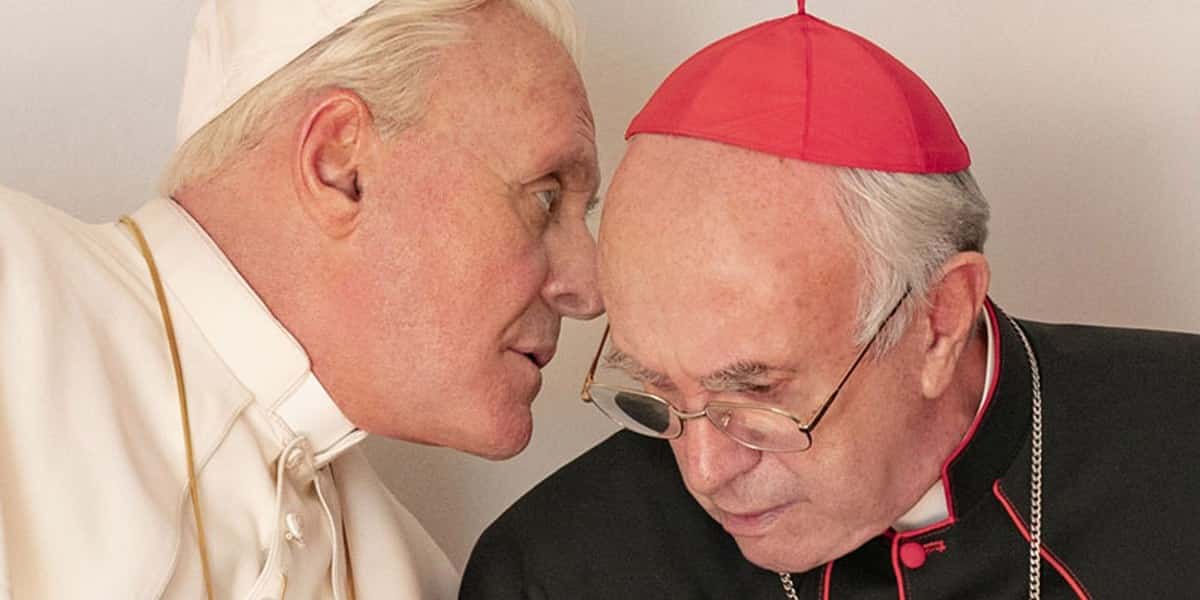 With Netflix’s constant inconsistencies with the quality of content they release, every original they offer up is entered with some intrepid fear that, inevitably, it’ll be a disaster. The Two Popes is the latest Netflix original, directed by City of God’s Fernando Meirelles and starring Jonathan Pryce and Anthony Hopkins. As someone who knows pretty much nothing of Catholicism, heading into the film, the worst thing that could possibly happen was that I’d learn a thing or two about the fall of Pope Benedict XIV and the rise of current Pope, Francis.

With Meirelles, Hopkins and Pryce all on board, the least we would receive with The Two Popes would be a visually engaging film that covers up two truly great performances. The performances capture a pivotal moment in the modern history of the Church, with Pope Benedict (Hopkins) finding himself under a slew of controversy and allegations. Meeting with Francis (Pryce), the two bond over their similar pasts and how each of them have taken a different path in how to deal with the positives and negatives of the Church. If anything, it’s a light biopic on the lives of the two, and a loose recollection of how Pope Francis came to be.

Crafted well thanks to an impressive performance from Jonathan Pryce, we get a glimpse into the life of the current Pope. Pryce has been a favourite of mine for some time, so to see him throw out an awards season performance of this calibre does fill me with some hope. His consistencies as a performer are matched well by Hopkins, the two have an undeniable chemistry and ease into some great performances alongside one another throughout the film. A great majority of the film is character based, we see the two Popes in conversation with one another, for the most part discussing Francis’ wish to resign.

From there, the film faulters somewhat. Although it’s great seeing two incredible performers crack out some great roles with relative ease, the writing lets them down somewhat. Eventually having to rely on extended flashbacks to the past, we get a glimpse into the life of Pope Francis, but not as focused as you would’ve expected. Hopkins feels more like a supporting character at times, bordering on narrator to the level of disconnect he has with a handful of his scenes. This is the fault of the dialogue though; the leading performers manage to capture the real-world figureheads they play with surprising ease. The strengths of these roles are able to carry us through to the very end with little pause to focus on the negatives.

The Two Popes is your expected Oscar and awards season bait, written and directed by a man that has had no problem with garnering critical acclaim, starring two individuals who have rightly acquired such status. It’s an experiment in direction, if anything. The performances are great, but the lacking script takes its evident toll on two resounding leading roles. Certainly worth watching, even if you have no affiliation or connection to the Church like me, at the very least it’s worth viewing solely to see Anthony Hopkins give a holy blessing to a slice of pizza and a Fanta Orange.