Review: A Beautiful Day in the Neighbourhood 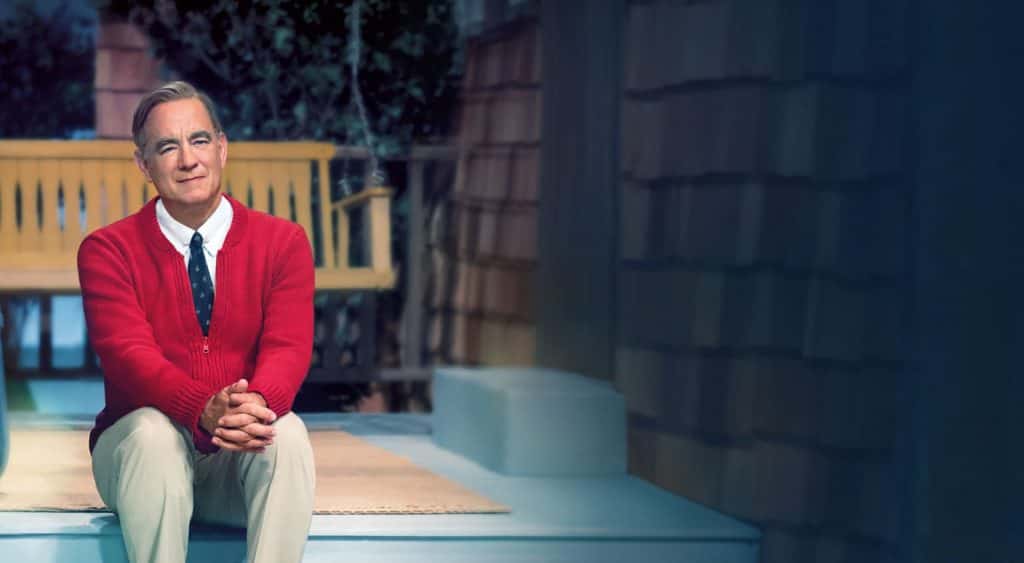 In the 90s and even much of the early 2000s, American audiences were treated to the wonderfully calming shows led by the likes of Mr. Fred Rogers and Bob Ross among many. In the U.K., we had Mr. Blobby and Noel Edmonds. In one of the few examples where America has bested us, their lovingly crafted biopic A Beautiful Day in the Neighbourhood follows the story of the time journalist Lloyd Doberman (real name Tom Junod), was tasked with profiling TV alumni and all–round lovable guy, Fred Rogers, for Esquire magazine.

With the biopic formula firmly in place, it comes down to our leading performers alone to give us something worthwhile for our eyes and ears to feast upon. Tom Hanks has been a safe pair of hands in that regard for about thirty years now, with almost every single film he appears in being worthwhile just to see one of the greats ease himself into his work. Taking on a role as big as Mr. Rogers, you’d think just about any actor would fear their representation of a television legend wouldn’t be up to scratch. The confidence that Hanks takes with him throughout this role has just about bagged him the critical and public reception that everyone would want from a role of this calibre. His performance is an enjoyably honest portrayal of the children’s entertainer, providing us remakes of classic episodes of Mr. Rogers’ Neighbourhood alongside a dive into the personal life of Rogers.

A charming performance equally matched by the work of Matthew Rhys, who plays journalist Lloyd Vogel (the real journalist that wrote the piece on Rogers is named Tom Junod, for the few that are interested). Rhys’ name has been cropping up in a few projects as of late, and I truly hope it stays that way. He’s got a certain talent to him, albeit not a unique face among a sea of dishevelled, stubble brandishing leads. He’s got his work cut out for him, but he plays ball here and manages to match up with the great Tom Hanks. At times his subplots that don’t engage with Mr. Rogers are a little fleeting, oftentimes being a poorly rounded family dilemma more than anything more interesting.

Tugging at your heart strings as frequently as you would ever expect from a biopic looking to profile the hardships of a journalist who refuses to connect with his father, A Beautiful Day in the Neighbourhood lathers the subplots on thick. The relationship between Lloyd and his father, Jerry Vogel (Chris Cooper) feels more like an afterthought, harmfully so given its importance to the overall story of the movie. Considering the importance of the subplot, we don’t delve deep enough into the message that director Marielle Heller tries to bring through. The balance between spending time with the issues at hand and also periods of reflection is poorly balanced, with the times of reflection coming much more clearly than those moments we should be reflecting on.

There’s something entirely wholesome and enjoyable to the movie, though, and I would happily place that feeling as something the cast and crew alone have managed to bring about. Not just because of their clear love for the work of Fred Rogers but because they’ve carefully adapted such a message. They’ve crafted their work around the intrinsic values of the much beloved television show, even going as far as to recreate footage showing former episodes, but with Hanks in place instead of Rogers.

As emotionally manipulative as it is, A Beautiful Day in the Neighbourhood manages to align itself with the comfortable makings of every other light-hearted biopic, trudging through darker subjects about our beloved heroes, and those that look to profile them. How something I know nothing about can connect so well is down to the strong performances and interesting directing style of Heller, whose work here provides us insight into the personal lives of Fred Rogers and Tom Junod. Bringing strong iconography of the show and blending it seamlessly into the direction of the film, A Beautiful Day in the Neighbourhood is a fully enjoyable, placid documentary that looks to profile a brief portion of somewhat interesting history.