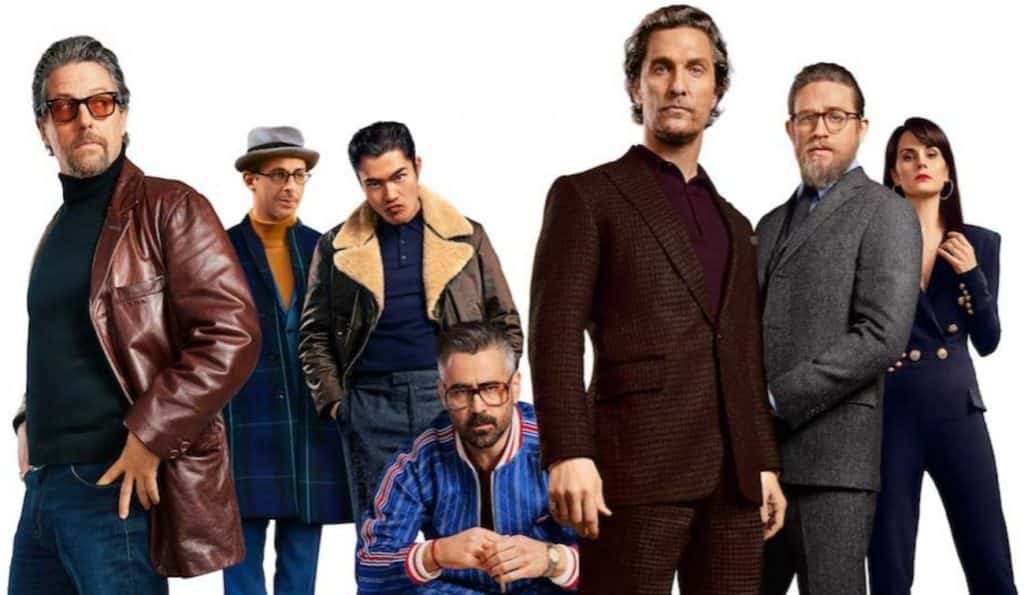 Seemingly unfulfilled in recreating the classic Disney animated cartoons as recklessly as he could, Guy Ritchie returns to his roots with The Gentlemen, revisiting the days of yesteryear when he could safely piece together a gangster flick and receive a credible amount of praise. Looking to capture those days of his direction, Ritchie’s latest film pieces together as many recognisable faces as possible in a sweet and engaging ensemble to ring in the New Year with. While 2019 may have been troubled from the getgo, it’s nice to see that the bold faced, blazen movie making of Ritchie looks to put the right foot first for 2020.

Following Mickey Pearson (Matthew McConaughey) as he tries to sell off his growing drug business in the hopes of receiving an early retirement, we follow him and right-hand man Raymond (Charlie Hunnam) as they both struggle with the near impossible task of backing out of a business that they are the respective Kingpins of, the dealing of marijuana. Attempting to sell his business to Mathew (Jeremy Strong), an all-out war begins between rising factions, old rivals and accidental heroes as each person strives to outmanoeuvre the other, all in a fashion told through flashbacks in a conversation between Raymond and Fletcher (Hugh Grant).

The greatest praise I can give to The Gentlemen is that the majority of its performances by some of the finest in the industry are as up to scratch as you’d ever expect them to be. We’ve got McConaughey in a seemingly leading role, yet he gets side-lined somewhat thanks to the different style of storytelling that Ritchie looks to present us with. Instead, we focus more on Hunnam, who has learnt his lesson from the previous Ritchie film King Arthur: Legend of the Sword and re-evaluated the style of performance he would like to present us with. This reformation proves successful, in a role seemingly tailor made for a man of his style. He enjoys a handful of well-placed scenes, some rather hilarious, with others on the more dramatic or action-packed side.

Ritchie and his extremely talented cast manage this balance well. We have some nice comic relief with Hugh Grant and Colin Farrell’s character, Coach, but those characters are not there just for comedy routines to throw out in the downtime. They’re fantastic performances, both of which are completely integral to the structure of the movie. Grant is more or less the closest we get to a narrator, providing us with brief snippets of detail, his journalistic assignment being to discover what has happened. He tells us as best he can, pausing every now and then to give the audience (and himself) a breather. It’s in the downtime that we are provided with some nice chemistry between Grant and Hunnam, with Grant excelling in yet another performance that takes us far away from what general fans will know him for.

With this style of storytelling though, there will always be a downside. For The Gentlemen, that downside is certainly its pacing, which can be scattered all over the place at times. For the most part it can keep itself together rather well, but its slapdash ending and predictably coincidental coming together brings a waft of dread and disappointment to it. There are a few scenes that contain spoilers that feel this way, maybe because Ritchie had written himself into a corner and didn’t quite know how to manage that. Either way, it’s a bit of a slap in the face, but one that can be forgiven considering how much fun the movie is on the whole.

The Gentlemen may benefit somewhat from my lack of knowledge on both Snatch and Lock, Stock and Two Smoking Barrels. My ineptitude at watching two classics of the gangster genre may have propelled The Gentlemen to a higher standard than I should expect of Ritchie, but what I do know is that it’s a great film on the whole, made so by solid performances from a mighty cast of British and American household names. A riotous time, both an engaging action packed drama, yet a piece that doesn’t take itself seriously enough to be a hard hitting emotive piledriver, and even The Gentlemen knows when to pump the brakes and throw in a sprinkling of humour.