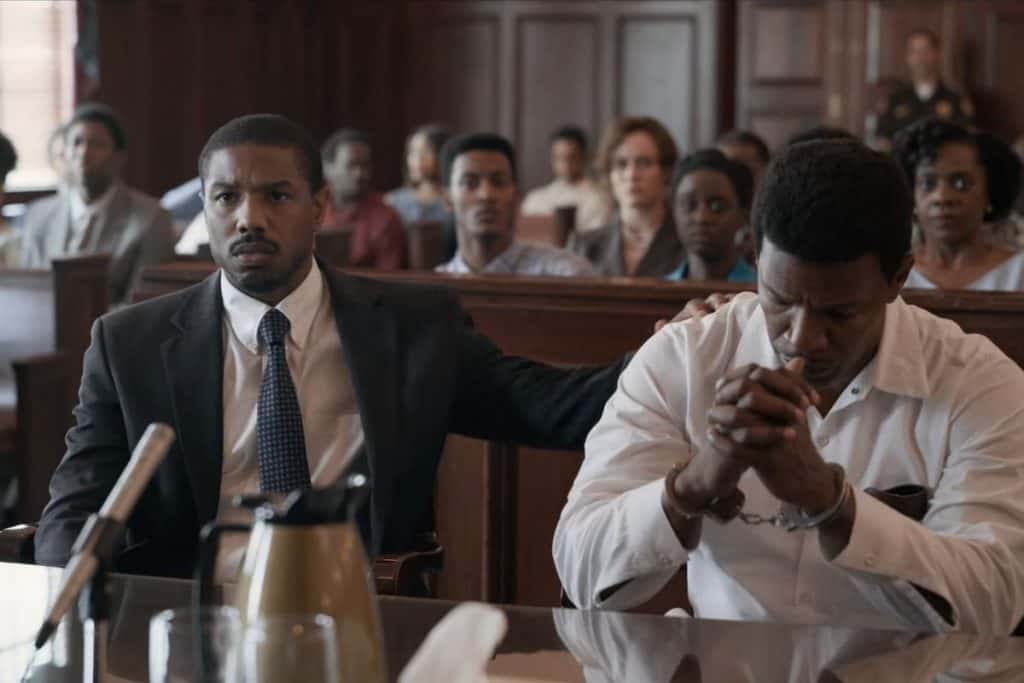 If there’s one thing that has been highlighted exponentially in films over the past two decades, it’s the horrors on display throughout the Death Row wing of any American prison. Spending your final days in a cell the size of a small office cubicle, until you’re suddenly seated in an electric chair is a moment that many films have tried to seize. The Green Mile, Dead Man Walking, The Life of David Gale and now Just Mercy, directed by Destin Daniel Crettin.

Crettin’s direction brings us the true story of death row inmate Walter McMillian (Jamie Foxx), a man convicted of murder in a biased trial that looked to seek swift and immediate justice for a family that lost their daughter. Concerned about the reliability of the trial and the vulnerability of a potentially innocent man, recent Harvard graduate, Bryan Stevenson (Michael B. Jordan) digs deeper into the trial to figure out whether or not McMillian is innocent of the crimes he has been sentenced to death for.

The film goes about its backstory in an almost pedestrian manner, setting itself up just like any other biopic. Not so much diving into the heavily lathered message of its subject matter, instead trimming the edges a bit to make it look and appear like a well-constructed biopic. It looks like it should, a fleeting dive into a brief period of history that aims to highlight injustice within America, specifically aimed at poor communities. It’s a message that needs to be thoroughly highlighted, and given the current political climate over there in the States, Just Mercy seems like it has a few small fish to fry, but can never bring itself to fully explore its own plot choices.

Jordan and Foxx’s performances are similar to that of the all-round feel of the movie. Serviceable yet shallow, set pieces come and go as Jordan and Foxx are catapulted through a whole variety of different scenes with one another in tow. As far as the chemistry goes, it’s unimpressive but there are a few sparks flying here and there. My main issue with the pair of them is that it’s not all that engaging a performance from either, and the Oscar bait wears a little thin by the halfway mark. Brie Larson, Rafe Spall and Tim Blake Nelson also appear in fleeting periods of time, all providing enjoyable yet completely forgettable performances. Spall is somewhat the ballast of the piece, a beacon of the faceless government that wants to keep McMillian in jail. Spall doesn’t sell it all that well, in part due to a poor script that fails to give him anything engaging to work with.

That’s a problem the entire film has though. The writing is, at best, inconsistent. There are fleeting moments that look to provide engaging or emotive pieces through side characters that don’t really have anything to do with the main storyline. They just happen to be kicking around on the outskirts of the story, and as it turns out most of these side-lined stories are a lot more interesting than that of the main feature. Darnell Houston (Darrell Britt-Gibson) has some interesting style choices toward his character, and is crucial in the development of the plot, yet disappears about three scenes after we’re first introduced to him. His few scenes are truly engaging, and his character is certainly of interest, unfortunately we don’t get to see where it could’ve gone.

There’s nothing all that special to the formula or style of Just Mercy, its cookie cutter basis of biopic storytelling is apparent around every corner. Brandishing a truly important message of racial discrimination in the American judicial service, it’s a truly sad shame that Just Mercy can’t quite grasp at the cultural relevance of its tale without slipping into a poor formula that cinema fans will know and expect from just about any true story retelling.