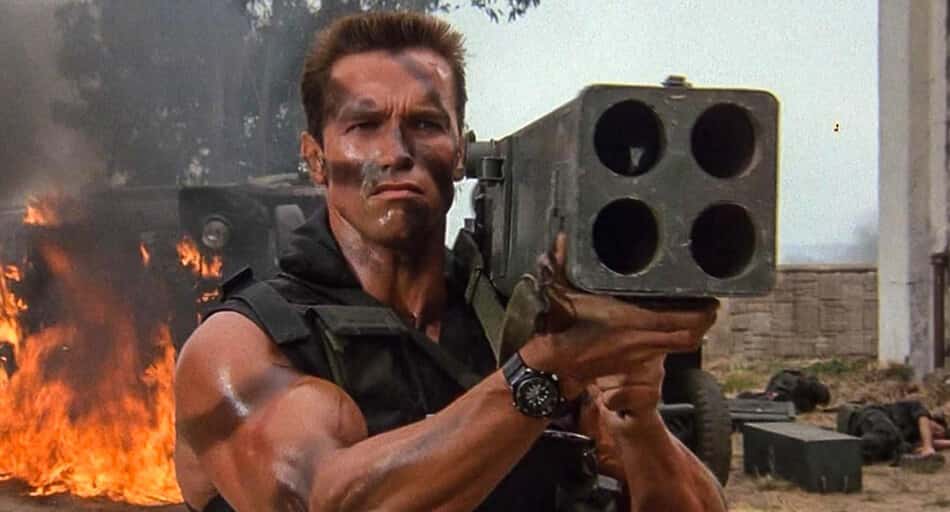 Why I didn’t have the nerve to give this movie a full five-star rating on my first viewing is beyond me, because if there were ever an action movie worth that high a rating, it’d be Commando. From cult director Mark L. Lester and starring the prolific and ever brilliant Arnold Schwarzenegger, Commando proves itself as one of the greatest action films of the 1980s.

The very definition of the genre, full of fast paced action right from the very start and packed to the brim with over the top villains and extremely hilarious set pieces. It all goes together so superbly well and it’s held together perfectly by the leading man performance of Arnold Schwarzenegger. Arnie provides the best performance he’s ever given here; John Matrix may not be his best remembered character but it’s by far the one with the most versatility.

Packing the punch with one liners, brilliantly choreographed fight scenes and the ever prominent explosive piece, Matrix sets out to save his daughter who was kidnapped by an Australian man wearing a chainmail mesh vest. No greater villain has ever existed, and Vernon Wells’ performance as Bennett rounds the movie off in spectacular fashion. Subject to multiple one-liner quips from Arnie, along with having some uniquely different henchmen, Bennett has a surprising amount of depth to him.

Maybe it’s the fast pacing that makes Commando so truly perfect, as it packs a hell of a lot of action into a very comfortable hour and a half of viewing pleasure. Fighting against the clock, Matrix manages to follow the breadcrumb trail of differing henchmen as he hunts down Bennett, culminating in one of the greatest fight scenes to ever exist on film.

Arnie’s leading performance isn’t all that memorable, but once settling in to watch Commando, you’re met with the expected tropes his action-oriented performances bring. Feeling like a mix of Predator and Terminator 2: Judgement Day, his performance works so perfectly well with the tone and style of the movie on the whole.

A stunning, action-packed movie that relies on a very basic plot that’s littered with explosions, hilariously over the top scenes and the longest action scene in film history, Commando is a blend of pure adrenalin and infamous Arnie masculinity. The perfect action movie to begin any style of action-oriented marathon, it’s a timeless classic.