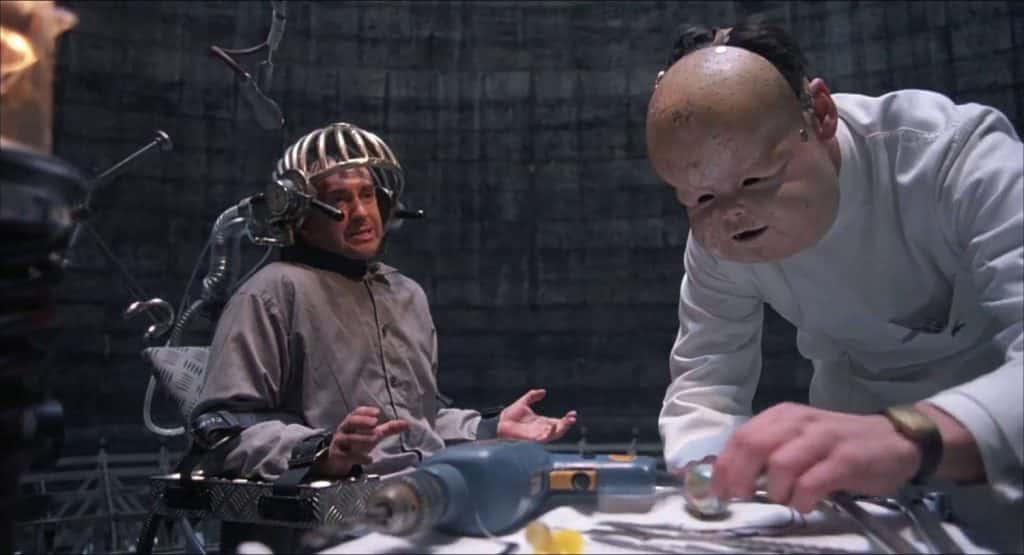 If there is one inconsistency in this world, it’s the output of director Terry Gilliam. For a time, I thought he was deep-rooted in his Python ways, struggling to make anything compelling or unique, especially after 12 Monkeys. A slave to his own unique style, which would often overtake or erase any substance the movie could possibly wish to have. The Man Who Killed Don Quixote slumped out with some evidence pointing towards his vision being boring, regardless of style. Feeling rather fearful that it was the waning years of an overhyped career, I decided to retreat into his older works, and what a truly great idea that was.

Brazil is a compelling film with obvious inspiration from the Orwellian style of creativity. Bleak and obsolete futures where the sky, trees and buildings are grey, but within there’s one plucky character looking to do a little bit of good. This time, that man is Sam Lowry (Jonathan Pryce), a Ministry employee whose main task is to keep the bumbling Mr. Kurtzman (Ian Holm) away from genuine, incompetent danger. But after a run in with a case of the wrong man, Lowry finds himself infatuated with do-gooder Jill Layton (Kim Greist) and sets out to save her from impending danger.

The similarities between this and the exceptional Nineteen Eighty-Four film starring John Hurt are eagerly similar. From protagonist to motif to escapism metaphors, everything feels very copied and pasted, but with that wry Gilliam twist that he loves to play around with. There’s enough unique content here to provide a huge edge over any contemporary competition.

Pryce’s performance in particular clinches the edge over anything else available. Possibly a career best performance, and he works so perfectly with Gilliam’s direction the whole way through. There’s a real feeling of danger and frivolously thrilling antics whenever Lowry is on the screen. He’s nowhere close to being oppressed, he’s on the other side of the coin, a cog in the machine. He has no goals, no ambitions and no need for his mother’s insistence on promotion. He’s happy to live his life the way it is set out, that is of course until his brief encounter with Archibald Tuttle (Robert De Niro), a terrorist who fixes his air conditioning.

De Niro’s brief but brilliant performance highlights well how a small role can be a main feature if dragged out correctly. His few interactions with Lowry are enough to inspire him to bridge out of his mid-life crisis and pursue something truly meaningful to him. Along the way he bumps into a whole host of British icons, each of them giving their own incredibly perfect performance. Michael Palin, Bob Hoskins, Jim Broadbent and Sheila Reid all do their part in making this an incredibly fun viewing.

Blending the finest pieces of his directing work with some of the greatest on-screen performances of all time, Brazil is a masterclass in presenting the weird and wonderful. Jonathan Pryce blends his performance with the twisted and compelling mind of Gilliam to craft one of the greatest feature lengths of all time. A real triumph in filmmaking, both from a visual and creative perspective, a truly rare experience that you won’t want to miss out on.