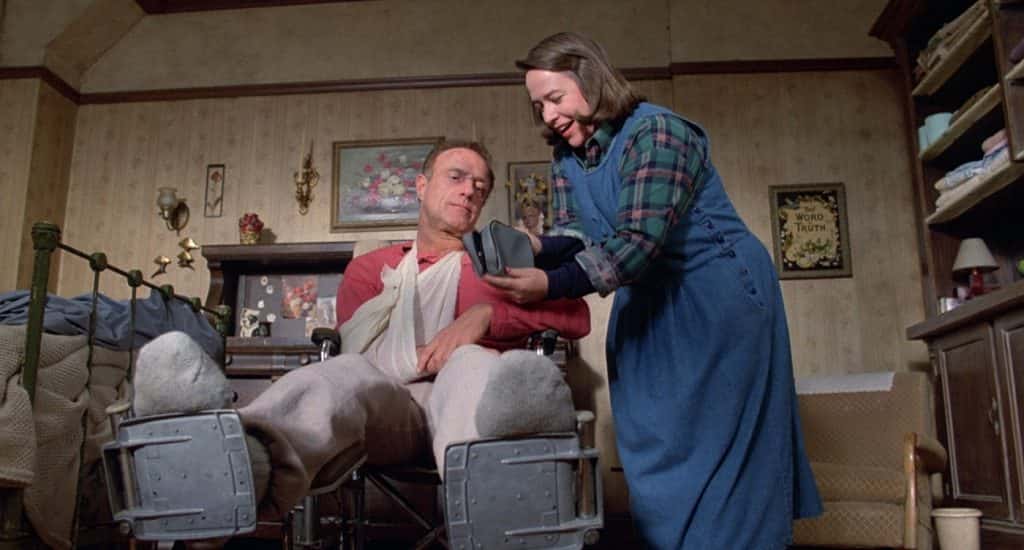 A rewatch of Misery didn’t seem too necessary since I live in it, but ‘tis the season to be horrified and the only horror movies I can really stomach these days are adaptations of Stephen King novella. With that in mind, his are also the most reliable of horror films I’ve came across, and a handful of his adaptations to the big screen litter my all-time favourites. The Shining is an obvious choice, but Misery manages to clinch a special spot in my heart. A film that manages to rely on performance alone, and somehow improves on the initial text it is based on, the Rob Reiner directed horror/thriller is a necessary watch for fans of the horror genre.

Set in the snowy mountain tops of Silver Creek, Colorado, writer Paul Sheldon (James Caan) finds himself under the care of Annie Wilkes (Kathy Bates), after a near-death car crash during a blizzard. Wilkes is a fan of Sheldon’s series of books, and thrives on the opportunity to meet and care for her idol. But soon things take an expectedly twisted turn, and Sheldon’s road to recovery paves a more dangerous route than could ever be expected. Sheldon plans to escape, and we watch as he plots a way out of Wilkes’ house.

It’s a shame that Caan’s career turned out the way it did. A hatred for acting paired with numerously dreadful films post-Misery leaves a lot more to be desired from him. His performance here is genuinely incredible, possibly the best of his career. His personality and little intricacies that he can bring to the performance are mesmerising, a role that is bound to one room for nearly all of the film provides us with some incredible material. He plays off well with the ever-great Kathy Bates, who received an Academy Award for her role as twisted nurse Annie Wilkes. The two have enviable chemistry, and their on-screen presence is an absolute treat the whole way through.

Reiner’s direction brings this all together very well, he’s a reliable director that managed to make a name for himself with a great body of work in the mid 80s and early 90s. Misery rounds off his excellent work in When Harry Met Sally and The Princess Bride in crowning fashion, a real winning streak for his career. His direction doesn’t seem to have a voice of its own, but he manages to craft great movies by honing in on the performances of his stars, which is the most likely reason as to why Misery works so very well.

I feel like Misery provides us a fantasy of Stephen King, and what he hopes may happen when he finishes his next book. Kidnapped by a mental fan and forcibly bed-bound as he types away on a decrepit typewriter, whittling the hours away as he types up yet another masterpiece to be adapted to the big screen. It’s no surprise Misery is one of the best in the genre, a film that captures a tremendous atmosphere and manages to make it last for a comfortably engaging and frightfully fun time.