Before starting this official review, I would just like to say how I nearly didn’t go to this gig. Despite my excitement earlier in the day, I was ready to turn around and go home after a disheartening build up to the gig. I powered through the sinking feeling and really enjoyed myself! 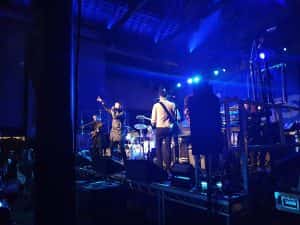 First to grace the stage were Social Room, a six-piece Sunderland band who very clearly were influenced by classic britpop  – in fact if the spirit of Oasis was to have a second coming in Sunderland, Social Room would be it. At first, I regarded them as a somewhat generic indie britpop band, but as their set progressed I was absolutely hooked on their tunes and their Mackem charm.

Their new and currently unreleased single ‘Chase Those Tears Away’ had the sparse crowd absolutely bouncing; it was anthemic and incredibly catchy despite being referred to as “lovey dovey s***” by frontman Matty Smith and I greatly look forward to its release. Another honourable mention from the setlist was ‘SR7’, which stands as the greatest dedication to a town I’ve ever heard. With an instrumental plucked almost straight from the back catalogue of The Stone Roses, the lyrics begin: “Back to heaven, postcode SR7,” which paints an absolutely beautiful picture of Sunderland that many might not see. As people continued to file into Boiler Shop, it became apparent who among the crowd had travelled from Sunderland to support the first support act. 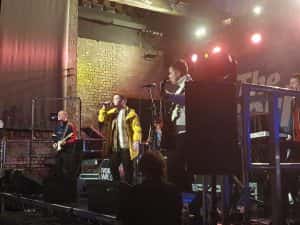 After a couple of nifty stage adjustments, Ivory Wave were next to perform. In the break between acts I had been chatting to a superfan of the band who had travelled all the way from her home in Yorkshire to see them, and she gave me quite possibly the easiest way to describe the group – a young version of Happy Mondays. Not only did the band make her feel nostalgic to earlier musicians, they must have also influenced her fashion sense as she attended the gig wearing the exact same Burberry-style scarf as the frontman!

Much like Social Room, there were two songs that stood out the most for me: ‘Uptown’, which they played a little slower than the rest but with twice the amount of funk, and ‘Club’, an incredibly strong finishing move to really get the fans pumped. Their whole set was jam-packed with energy and they seemed genuinely excited to be there – singer George Johnson recalled the fact that this show would be their 100th show and praised the crowd for being their best one yet. The Brummy five-piece were funky, friendly and downright fantastic both in music and mid-set banter, amid a very cool, minimalist stage set-up with two old style television sets displaying static and soundwaves.

Finishing off two incredible support acts and some even more spectacular dancing from the crowd between stage changes – picture hundreds of drunk indie fans jumping around to ‘When The Sun Goes Down’ – it was time for The Sherlocks.

The stage was lit with huge but minimalist-style neon light strips built into giant squares, which flooded light on the band and made the glittery drum set pop with colour. They hit us with a strong and heavy start with ‘Magic Man’ and ‘Escapade’ and fans were absolutely wild for it, people bounced from front to back and circles of mosh pits opened and closed in quick succession. We were treated to a glimpse of ‘a new single from album three’ and with as much potential to get as big as ‘Chasing Shadows’ or ‘Magic Man’, ‘Wake Up’ was incredibly catchy and upbeat. 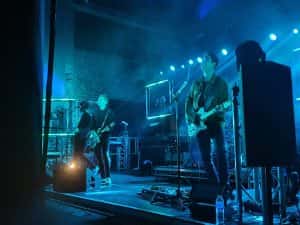 Midway through the set, Kiaran took it upon himself to spur on some classic Newcastle chants and all of a sudden Boiler Shop could have been confused for St. James’ Park as plenty of jeering and football shouts came from the crowd. I took this as an opportunity to stand back from the barrier and immerse myself in the quieter crowd – if you can call them that. Away from the crush, mini groups of people formed smaller dance circles and couples swayed together to music that carried in waves down the long and narrow venue.

Their mid-set cover of ‘I Wanna Be Adored’ by The Stone Roses was incredible and matched the exact same chest-rumbling bass guitar and nonchalant vocals that was encapsulated in the late 80s indie classic. Following that, the sheer amount of people singing to ‘Live For The Moment’ could have continued the final stretch of the show as an a cappella version of the band.

Overall, this was up there as an absolutely great gig and I’m glad that I persevered – all three artists were fantastic and the atmosphere was incredible.