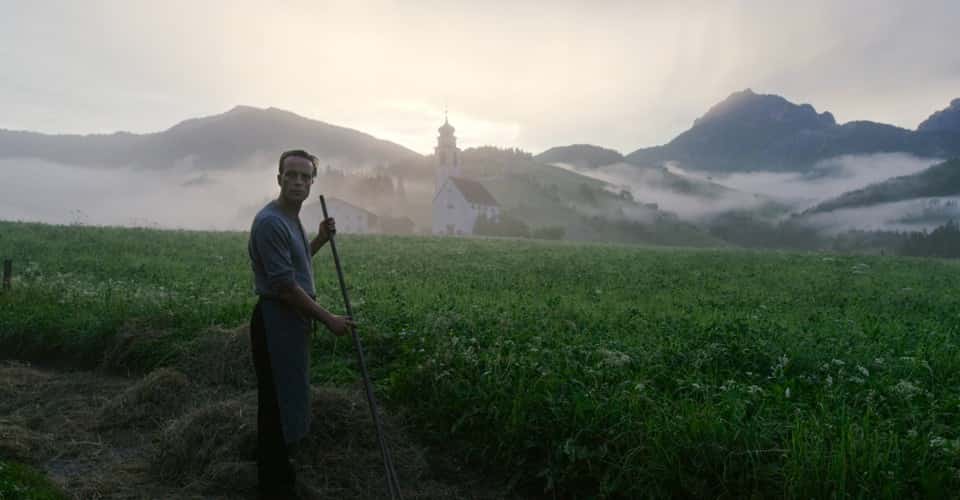 I enjoy films like A Hidden Life a little too much all thanks to the time I studied history as an A-Level. Because of this, I can tell you that those who refused conscription in England would be lauded by the public and sent white feathers, while in Germany they were ostracised from their communities, tortured, and then shot. I suppose that’s just one of the many differences the Second World War brought us, and with A Hidden Life, the difference between right and wrong is blended as a man looks to keep his family life together while on the verge of receiving a letter of conscription.

Following the story of farmer and accidental conscientious objector Franz Jägerstätter (August Diehl) and his impartiality in the outbreak of World War Two, A Hidden LIfe showcases one of many forgotten historical stories. Diehl is an extraordinary performer; his work here brings to life a loving family man that refuses to fight in the war against Allied forces. A Hidden Life brings into focus the moral ambiguity some felt during the time of war, an Austrian farmer who has no love for the powers within Germany, and isn’t afraid to state so. Jägerstätter’s story is an admirable one, and director Terrence Malick brings it to life with extraordinary detail.

I’ve had my fair share of disagreements with the films of Malick. I’m in the minority camp that believe his overly pretentious efforts in The Tree of Life were grating, and I found The Thin Red Line an absolute snooze fest. But now that I’ve enjoyed myself with Badlands, I felt like giving this director another chance. I’m very glad I did, because at nearly three hours in length, Malick wastes no single frame of the film. Sporadically beautiful, guiding the performances well and doing just about everything at an outstanding standard. Malick has had a string of unnecessarily mediocre films as of late, but with A Hidden Life, all is redeemed throughout a film that looks, sounds and feels beautiful.

This beauty collides with the abject story, one of disastrous consequences and featuring no silver lining. No redemption, no growth as a character, it’s purely there to dictate a historical narrative no matter how depressing it is. With all credit to Malick and Diehl for bringing such a performance to life, it’s impressive that such a film can capture the horrors of those who dared to defy the authoritarian regime of Nazi Germany. It paints a clear picture, showcasing the devastation this defiance brings to his family and the isolation they face within their own community.

It’s not often that we see a war film from the perspective of the loser. To the victor goes the spoils and all that, but Terrence Malick has crafted a piece of film that showcases the brutality on the other side. A piece of film that presents us with the harrowing realisation that if you weren’t shot in the trenches, you’d be shot in a prison. A Hidden Life is perhaps the best film of 2019, in part due to how weak a year it was for film, but also due to it being a creative masterclass. A pivotal film for Malick fans, and an absolute treat of a visual experience, wrapping itself around a story of great historical importance.