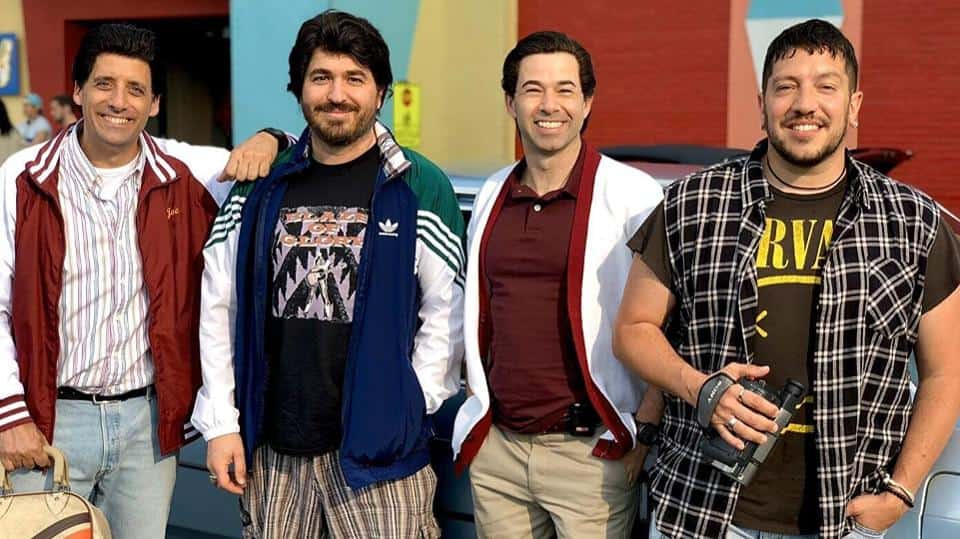 I’m no fan of television, not much of it anyway, but I’ll always have a soft spot for Impractical Jokers, a light-hearted, easy-going piece of comedy that presents us with a more adult and sophisticated version of The Prank Patrol (if that’s even possible). A cluster of American television that I feel rather engaged with, Impractical Jokes comes under the umbrella of Man vs. Food, Gordon Ramsay’s Kitchen Nightmares and Jackass. Comfortable viewing that isn’t all that taxing. A big screen adaptation, Impractical Jokers: The Movie, would, I assume, be a feature length adaptation of their television show antics.

Sal, Joe, Murr and the other one take themselves on a quasi-fictional story, given three tickets to a party hosted by Paula Abdul. With four members and only three tickets, they take a road trip to the party, stopping off from time to time harnessing their various skits and impractical jokes to see who will be the biggest loser. The punishment, I assume, is not going to a flash party. It’s a similar sort of system I saw in Between Two Ferns: The Movie, a Netflix original that expanded upon a rather enjoyable premise and littered fictional backstories to its leading character, a fictionalised version of Zach Galifianakis. Blurring the line of fiction and reality with these sorts of adaptations never really works all that well, and it’s nice to see that Impractical Jokers: The Movie supports this thought.

Perhaps the four fan favourites are portraying us the ultimate joke, as Impractical Jokers: The Movie provides all the highs of burying a beloved family pet. An introduction to the four that makes it seem like their friendship isn’t genuine, the film slides into a mesh of ridiculousness almost immediately. The fictional scenes are bottom rung territory of comedy, boiling down to dialogue where one of the four is prompted to do something, refuses the act because of how redundant it is, finds themselves egged on by a second member of the group and then finds themselves in the midst of the original act while the final member of the group explains what’s happening even though we can see it. These scenes are nothing short of painful, a real slog to get through anything that involves the fictional bonding whatsoever.

When we get to the actual impractical jokes though, they’re few and far between. Breathers between the insufferable fictional story woven into a handful of somewhat enjoyable content that can be found in the television show. Making the jump to the big screen should always offer up something new or impressive. At no time does it feel like the four are flexing these new found budget guns, a seemingly large amount is spent on the fictional aspects of the film, which isn’t exactly what I find interesting about The Tenderloins comedy troupe. What few pranks we do get are offerings of sheer pity. Sal dressed as a mall Santa is humorous, just nowhere near enough of it is shown. Murr and the eulogy speech is, again, quite funny, but it suffers the same lack of breathing room. All of these pranks are quite fun, but there’s no difference between this and the television show. It makes the whole film futile.

So, I suffered through Impractical Jokers: The Movie, making me tonight’s biggest loser. It amazes me what people can find funny these days and, considering the four involved are full time comedians, it makes me fear for the future of the genre. This has become somewhat the norm and it’s absolutely horrible. I felt like I was being suffocated with a whoopie cushion, that’s the level of comedy the Impractical Jokers have degraded themselves to with this feature length self-sabotage.