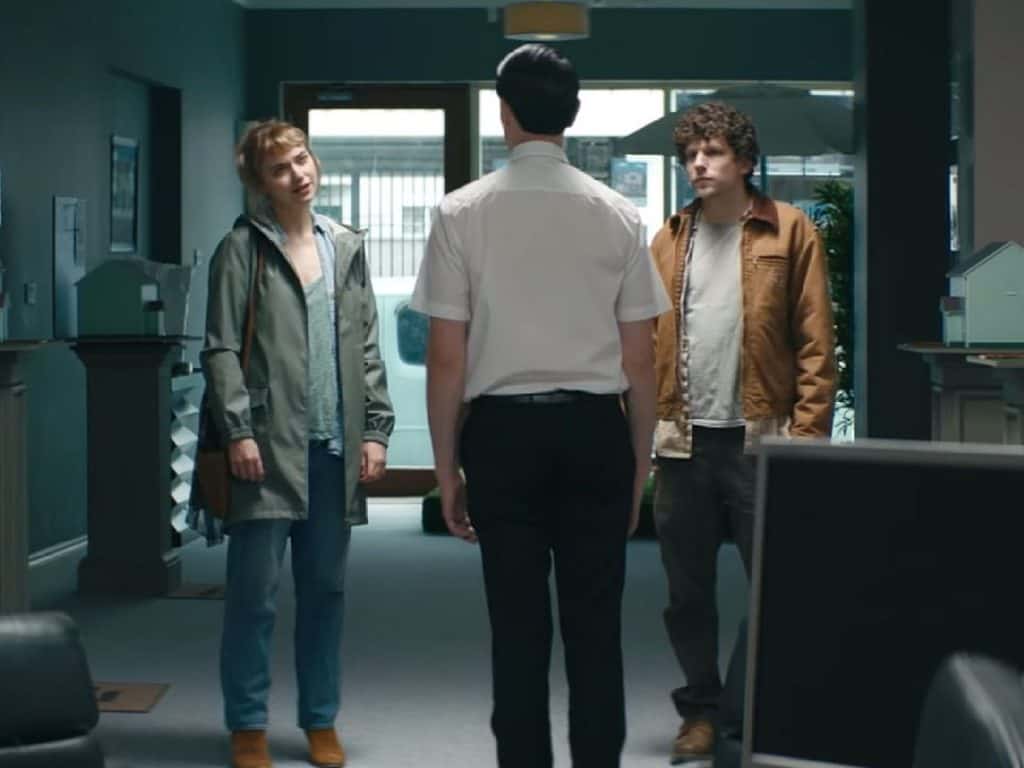 Assembling a small collection of great actors and then making them traipse through your half-baked dystopian criticism of suburban happiness is a tremendously bold move to make in the current climate. I remember being excited for Vivarium when first seeing it announced, primarily due to the starring duo of Imogen Poots and Jesse Eisenberg, two actors that seem to have fallen from the very high pedestal they once sat upon, but have recovered gracefully and pooled together an impressive range of performances that just don’t happen to lock eyes with greater success. Director Lorcan Finnegan drives us deep into the heart of starter home horrors with his latest feature film, a completely lukewarm attempt at the horrors of family life.

Vivarium is an overly glossy mess, one that takes the pristine living arrangements of estate housing and funnels as much wacky imagery into the plot as it can. It doesn’t work, and at the best of times is a visible headache. Bland camera movements coupled with the sleek and uncomfortably obnoxious designs you’d expect to find in independent horror, it’s as if this pool of young talent is incapable of going against the trend of gleaming perfection. Hiding away the horror in the darkest corners of the film, Finnegan loses out on the opportunity to present us with even a glimmer of paradoxical filmmaking, unforgivable since there’s more than enough room for it.

Lucky enough to have a couple of performances that do make up for the bland and uninspired cinematography, Poots and Eisenberg are affable in their sedentary roles. A generic couple looking for that perfect starter home, trying to get a foot on the ladder. Writing pair Garret Shanley and Finnegan are happy enough in taking easy jabs at those looking to enter the rat race, but their criticism is confusing and subverted entirely by nonsense. The limited enjoyability to be found within this film comes from two leading performances that provide a pedestrian level of interest, their acclimatisation to their surreal surroundings becomes commonplace far too quickly. A slapdash cliché comes from the writing they choke on, most of it providing little to no reason for Gemma (Poots) and Tom (Eisenberg) to do anything whatsoever.

Vivarium should have hit harder than it does. It has a perfectly capable cast, dying for something more interesting to do than just digging a hole or preparing breakfast. There’s no redemption or message to be found within this thankfully short piece of film, no criticism that doesn’t come out looking smug or redundant, in many cases the two click together. Vivarium is a film of expressionless ideas. Moments of grandeur, diluted with dense, flimsy criticism that takes us nowhere whatsoever, Vivarium looks to highlight a slowly unfolding nightmare, but becomes one itself after filtering its way through ninety minutes of absolutely nothing of note.