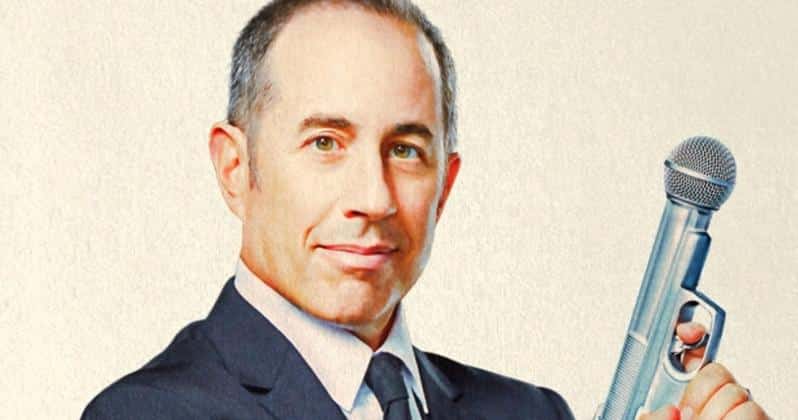 “If you were me, would you be up here, hacking out another one of these?”. No, Jerry, I don’t think I would be. Not solely because the previous Netflix special Jerry Not Seinfeld was a staunch reminder that nostalgia can carve a very comfortable getaway for 1990s comedians, but also because, at this stage in your career and by how you interact with your audience, you feel it’s rather below you to churn out an hour of stand-up for the people over at Netflix. Jerry Seinfeld: 23 Hours to Kill is the latest stand-up special from Seinfeld, but also marks the first outing of original material in twenty-two long years.

Seinfeld thrives on the attention of the audience. The adoration they throw onto the stage with him, his only defence knowing that he will never have to meet the unwashed masses that mingle and guffaw their way through this hour-long recording. Out of sync with the rest of humanity, playing catch-up on all the material he wrote from his private jet, Seinfeld mostly spends his time analysing and complaining about the word “text”, praising Pop-Tarts and complaining about texts again.

It takes far too long for Seinfeld to build up enough steam to get to the good stuff. He has pockets of joy hidden within, his love of being in his 60s adds some worth to the special. One of the few comedians I can think of that doesn’t fear the inevitability of age, Seinfeld is at his most in touch when he talks about how out of touch he is in this state of delirium. He boasts of his idealistic family life, and eventually it becomes more like a list of accomplishments than a comedy special. He does throw a few unexpected laughs in there though, when he’s not on auto-pilot he does manage to subvert the expected in the most extraordinarily passable moments.

Devoid of comedy, which is rather perverse for a stand-up special, Jerry Seinfeld: 23 Hours to Kill is a meandering time waster. With a vice-like grip on the brains of a selected niche, Seinfeld can lap up the laughter with as little effort as possible. His latest stand-up special will be fine for those that are nostalgic for his swear-free, nasally style, but the ideas and writing will fall on predictable anagrams and allegorical statements that most audiences will have all heard before. The lights are on, but nobody is home. We watch a man traipse around a stage performing for the sake of it, with no real care for what comes out of his mouth. It’s just a shame he says nothing of interest for a full sixty minutes.