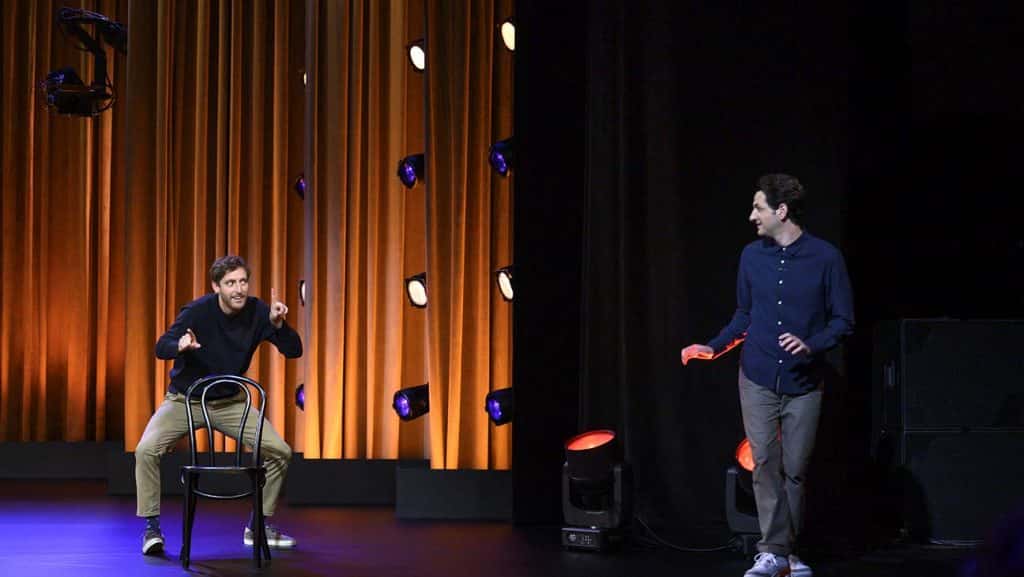 The confidence and nerve required to perform in front of others on a stage is something that few possess. A knack for comedy and the ability to perform well is a skill held by even less than that. Eventually you filter down into tremendous talent, the individuals who can bring something specific to the table, and do it with absolute perfection. Middleditch & Schwartz, the latest Netflix comedy outing, is a superb example of potential not quite coming into its own. Three episodes, three different scenarios offered up by the audience in completely improvised manners. It’s impressive regardless of whether or not it works, but Middleditch & Schwartz holds in it three incredibly cosy episodes.

One of the crutches used by stage performers Thomas Middleditch and Ben Schwartz is the breaking of the fourth wall. Flubbing lines, forgetting characters and general inconsistencies provide us with brief breaks from the improvised world and bring us to the attention of how much of this is a memory game. Schwartz and Middleditch do tremendously well in remembering the various characters, settings and prompts, their ability to think on the fly is more than enough to credit them as extremely talented comedians. To think up scenes that are indeed very funny without a moment’s notice is incredible, and they pull it together without so much as a single awkward pause or humourless moment.

There’s a lack of consistency though. Middleditch & Schwartz starts out exceptionally strong with a prompt that, on reflection, is funnier than half of the improv on display. The very high bar set by the debut episode filters down slowly, and eventually we’re left with a final episode that can deposit only a handful of truly funny moments. More and more of the humour begins to come from audience interaction, at one-point Schwartz makes his way into the audience, and it is lightly funny, but doesn’t reach the height of its potential. It reminds me of Bottom: Live somewhat, and how the stage shows of Rik Mayall and Ade Edmondson evolved from scripted pieces to on the fly prompts and audience interaction. The shows where they’re actively speaking to or defiling their audience are arguably the funnier shows, and Middleditch & Schwartz try and replicate that feeling somewhat.

It’s pretty good, especially by the standard of Netflix. Two men armed only with two chairs and their brains doesn’t sound all that entertaining, but it’s by far one of the funniest comedy sets on the platform right now. It’s up there with James Acaster’s Repertoire set, a high bar to reach considering the immense talent provided to us in that four-episode masterclass. Middleditch & Schwartz represents the niche of funny Americans, at least this stage show proves there’s at least two capable comedians currently working in the U.S.A.