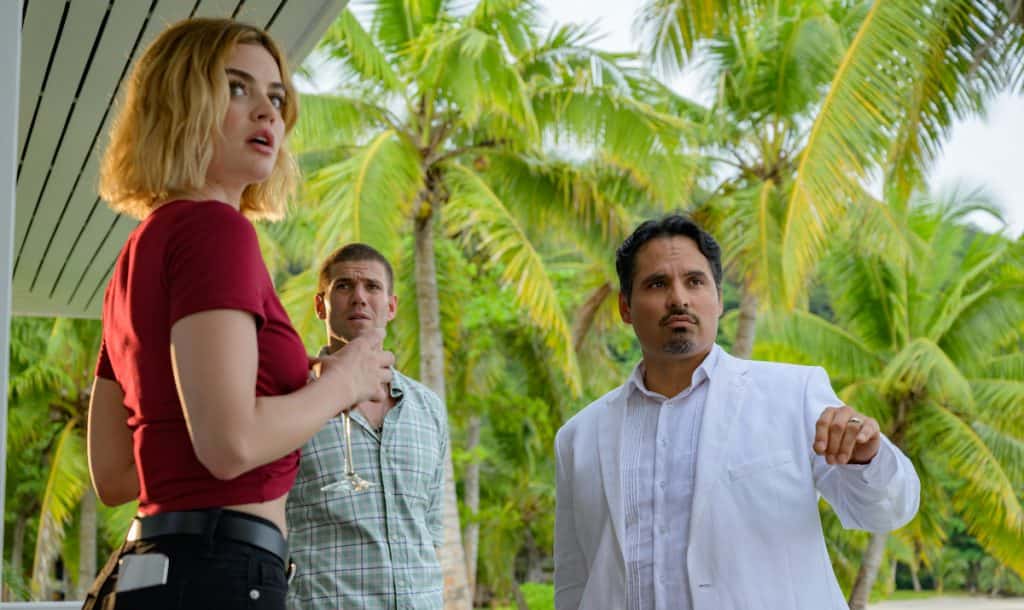 Film is often an exercise in how low we can go as a culture. Playing limbo with how regressive and poor studios can make their adaptations of forgotten television shows. Fantasy Island is an adaptation of an American show from the late 70s and early 80s. Imagine The Twilight Zone but tropical, boring and featuring Hervé Villechaize from The Man with the Golden Gun. A film adaptation then, was not only unnecessary, but inevitable, and who better to lead us through this adaptation than director Jeff Wadlow.

Wadlow’s direction proves futile and boring throughout Fantasy Island. There’s never a moment where his culmination of ideas or writing becomes worthy of merit. None of it feels organic or engaging. This may be down to the performances though, with Michael Pena phoning it in, Maggie Q providing conventional storytelling fatigue and Jimmy O. Yang being used as comic relief, even though his fantasy is the one that holds the film together.

“Two layers. I got two layers” says Brax. Yes, I suppose that is the case for the performance of Jimmy O. Yang. He and the rest of the cast offer a completely surface-level performance that never goes beyond an incredibly bland assembly of characters. Frat boy fantasies, pop culture references and performances that simply couldn’t keep up with the already slow pacing of the script. The more cringe-inducing moments are assembled with Brax and Bradley within their fantasy, possibly the most disengaging and obnoxious of all the characters. Somehow Michael Rooker has been thrust into this mess, and we find him rather aimlessly fluttering through the background from time to time until the plot deems him useful for one fateful scene.

Although these characters are overwhelmingly boring and mediocre, some of the performances are, at the very least, half-decent. Maggie Q, Yang and Austin Stowell bring out acceptable work, never mustering the courage to do anything interesting though. There are of course some terrible performances within, Lucy Hale, in particular, is unbelievably poor, and the script is no excuse for this moment. To be fair, the script is inconsequential, absolutely useless at all times and never sparking so much as an interesting twist or turn.

There are moments within the script that feel more like we’re watching a point and click adventure game with animatronics than anything close to that of a movie. A compendium of characters who experience their worst nightmares in the most uninteresting and bland of ways. A mesh of genres is a certainly interesting idea. Action settings, comedic pieces, romantic drama and everything in-between is thrown into Fantasy Island at every turn. Wadlow’s film becomes a jack of all trades, and a master of none. Clumsy, uncoordinated and the influx of genre’s leads to a creative nightmare, what little pacing and interest the film can muster is squandered almost immediately by an incredibly bland and disinteresting film.

Although monotonous, repetitive and attempting nothing new in its conventional camera work, Fantasy Island is, at the very least, a watchable piece of cinema that knows exactly what it is. It never feels like it’s overstaying its welcome, has a few call-backs that will make the few people to have viewed the television show feel nostalgic, and just about the right amount of horror and action to keep the everyday moviegoer engaged and involved. If it weren’t so unimaginative then this could’ve been a solid, throwaway horror, but instead it’s a painfully obnoxious piece with a lack of inspiration. Perhaps Wadlow should head on over to the island itself, utilising his fantasy to become a better director would be a tremendous step in the right direction.