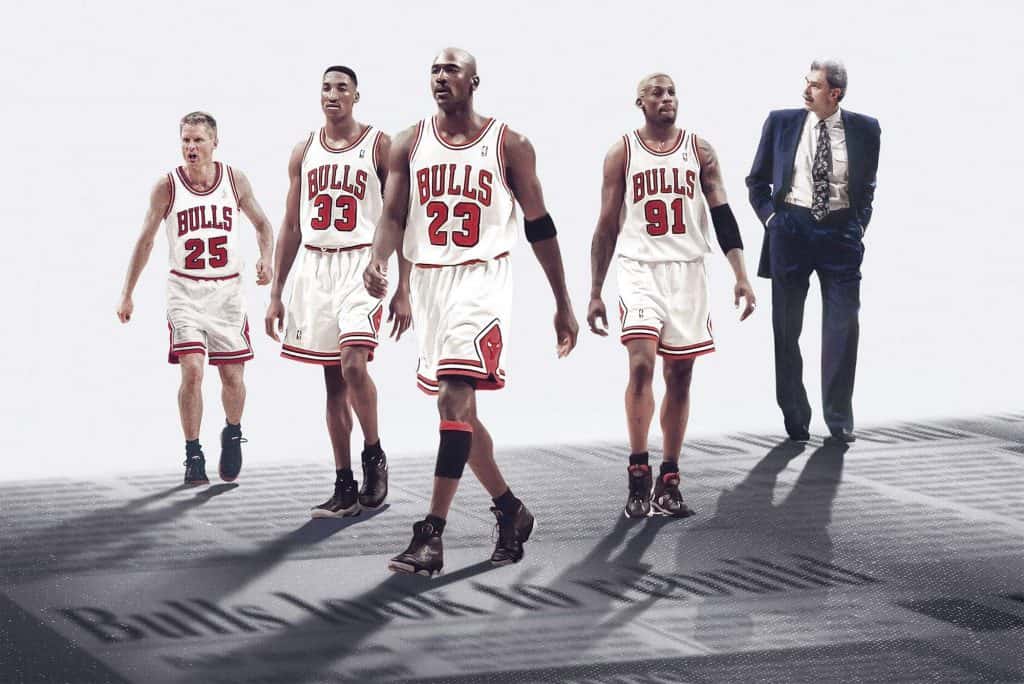 I’ve never watched a game of basketball. That would seem like a stupendous divide between engaging with a documentary on Michael Jordan, arguably the world’s greatest player of the NBA sport of all time, and the Chicago Bulls dynasty he lead in the 1990s. My only knowledge of basketball comes from Jordan’s starring role in Space Jam and the recent Ben Affleck movie, The Way Back. So for me to dive headfirst into The Last Dance, a documentary detailing the pivotal years of Jordan’s career with the Bulls, seems a tad foolhardy. It may have been a gamble, but after wrapping up this behemoth of a Netflix original, I can easily say it’s the greatest documentary have put out in recent memory.

A lack of knowledge on the sport isn’t something that should keep you from watching The Last Dance. Although almost entirely focused on the Chicago Bulls and their drive to win a sixth NBA Championship. I’m not entirely sure what it all means, how it works or even if it’s told conventionally and truthfully. My basketball knowledge starts with Michael Jordan and ends with that same name. What I will say though is that, whether or not the portrayals within the documentary are accurate, it’s a near-perfect time for both sports fans and those looking to kill a chunk of their free time.

The ease of access is welcoming, the first episode gives us a nice dive into the life of Jordan, how he grew up and his entry into basketball whilst at the same time peppering in later details that we’ll come to cling onto like it’s a golden nugget of wisdom. I’ve always been a stick in the mud about Netflix’s ability to push people into binging their content, I’ve never seen the appeal and usually manage to switch off after an episode or two. The Last Dance, however, I started and finished within two days. Cancelling what few plans I had remaining, bunking off of writing, even working it in around my new found exercise routine. For about 48 hours, I went basketball crazy, and it felt great.

Dissecting every aspect of this documentary is a behemoth task. There are interviews with hundreds of individuals, behind the scenes clips that showcase the Chicago Bulls surmount the increasingly impossible odds of a sixth championship win, alongside plenty of interview clips, contemporary pieces and reflections from all the main players, the coach, sports correspondents, former United States presidents, residents of Chicago and just about any person that had so much as breathed near Michael Jordan. It’s nice to see that the majority of these pieces aren’t filler, they all feel detrimental to the streamlined interest of the documentary.

There are of course a couple of issues. Crafting a documentary around the good deeds and can-do optimism of Michael Jordan leaves very little room for criticism. At times, it feels like director Jason Hehir has no choice but to portray Jordan as the hero who swung in to save the Bulls and give them the redemption they truly deserved. That much may be true, but it leaves crucial players such as Scottie Pippin and Steve Kerr hung out to dry. They do of course get their due respect, pockets within a few episodes are dedicated to how crucial they, alongside Dennis Rodman and coach Phil Jackson were to the team’s success. But, as expected, the majority of the praise and focus goes right for team leader Michael Jordan.

It’s an all-encompassing documentary, detailing the extraordinary career of a man who was and still is a role model for millions across the globe. After gleefully making my way through the series, watching his various techniques for the game, I can’t help but like the guy. Jordan’s influence knows no bounds, and that effective detail is captured tremendously by The Last Dance. With an unexpectedly candid and emotional crack at the prime time of the Chicago Bulls, The Last Dance will prove an entertaining distraction for those without the slightest grasp of basketball knowledge, and a water cooler piece of creative documentary making for long term fans of the game.