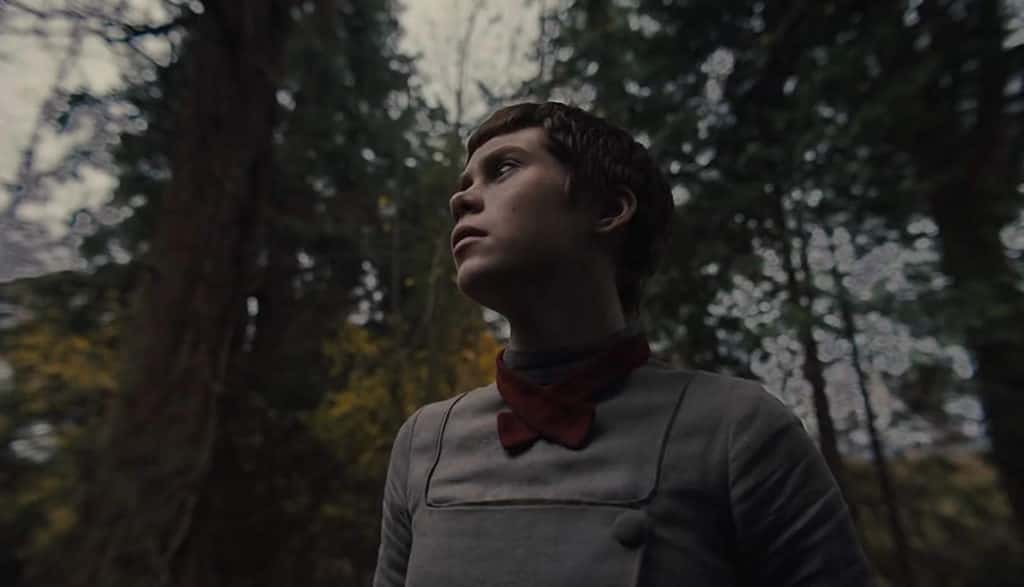 Another dark reimagining of a fairy-tale classic, Gretel and Hansel, directed by Oz Perkins, is one more for the growing pile of adaptations. For someone that has never read the original tale, nor seen any adaptations of it, it’s amazing how much of the story I’ve assimilated into my system merely through pop culture references and brief mentions of it from friends and family. I’m not sure a harsh adaptation of this was all that necessary, but I suppose if the only alternative is Hansel and Gretel: Witch Hunters, it’s mandatory to try and scrub the slate clean.

Much of the dialogue feels rather stilted, a blend of the “old English” of the time with a contemporary American. It’s as if the film doesn’t want to alienate its audience too much with jargon and prose from a time gone by, but it’s far weaker to not commit to such an angle. Gretel and Hansel struggles tremendously because of this. “It smells of cake, and I am unable to resist” is one of the many lines throughout that, I assume, were not meant to be funny. It’s rather hilarious, and comes at a pivotal early moment in the film. Dialogue such as this is always the product of shoddy worldbuilding, forcing a relationship between two leading characters because we so desperately need to see them work together. Integral moments that don’t offer up so much as a glimmer of originality.

Perkins’ direction is nice, his use of colours and the contrast they bring are marvellous, delicate moments that bring out the best in each scene. Some beautiful shot choices are on display, but they’ve become commonplace in the artistic side of the horror genre. Sacrificing conventional scares for risky worldbuilding techniques, Gretel and Hansel does manage to just about create an eerie atmosphere, albeit one that feels a tad forced. There are moments of actual terror throughout, the ominous and weird moments blend nicely with such clear direction. Focusing in more and more on the witchcraft and driving a stake between the family bond of our eponymous characters, Perkins’ direction takes us through some marvellous moments that are completely subverted by some sporadically weak writing.

Amazing visuals do not, unfortunately, make up for the rather shallow performances on display. Our titular protagonists are nothing short of annoying, and their relative importance to the story really does begin to grate as the film recedes into darker, gruesome moments. These moments would be much better if it weren’t for these poorer areas. A dark twist on the old fairy tale is ripe for the picking, but this isn’t at all well performed, the menacing visuals do indeed make up for it in a way though. Perhaps if the writing were a bit better, then it could’ve been salvaged, but Gretel and Hansel is an unfortunately mediocre adaptation of a classic fairy-tale. Nothing memorable, but with some interesting direction from Perkins, there are visual flairs galore, but they mask little in the way of conventional horror.

The sleek look and design of the modern horror film can be found in every scene of Gretel and Hansel, a frankly mediocre piece of film that does as much for fairy tales as Snow White: A Tale of Terror did. Perkins clearly has an eye for set-piece moments, it’s just a shame there’s no pacing or build-up in-between them. We’re jolted from scene to scene without much of a care in the world, and coupling this with some rather redundant dialogue makes for a truly boring piece.