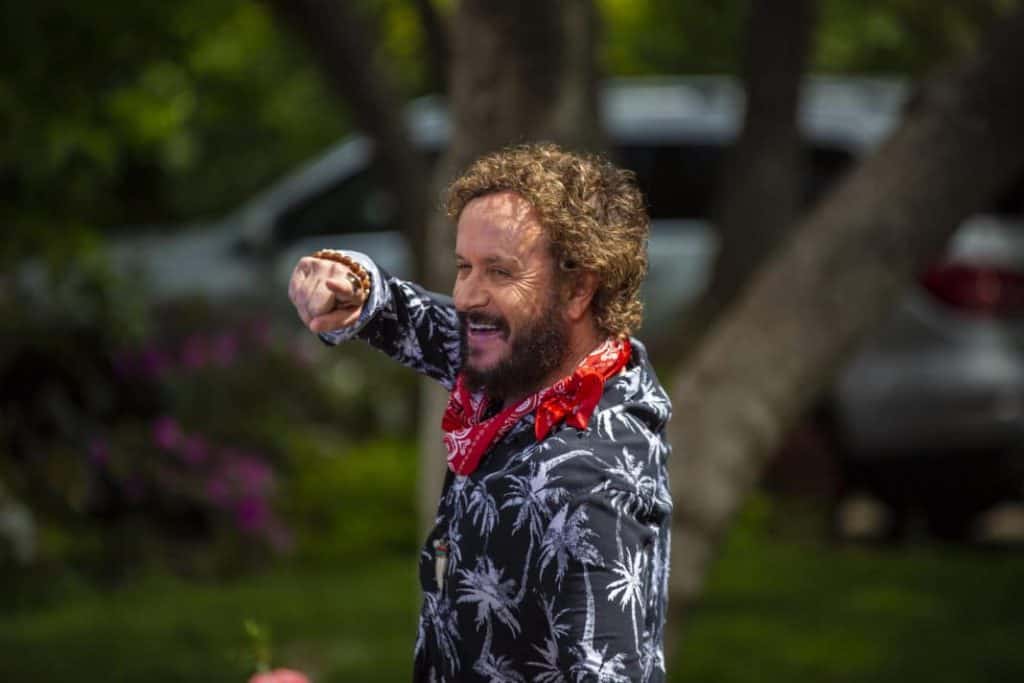 From the very first seconds of Guest House, you can immediately tell who the audience is, why the film isn’t going to work, and everything it’s going to do. A look at frat party America, with all the bells and whistles attached to it, directed by a man with pasta in his name. Sam Macaroni’s tale of a newlywed couple experiencing a turf war with a squatter living in their guest house. A friend of the former owner, Randy Cockfield (Pauly Shore) finds himself at odds with the new couple, who try to evict him from their property. Given the way Shore’s career is going, he should be used to playing squatters by now, I can’t imagine he’s been working much after starring in Dr. Dolittle: Million Dollar Mutts.

It surprises me that Shore is allowed to act anymore, and I’d hoped Biodome had killed his career off entirely. Cockfield is a collector of “rare items”, including a dartboard, Christmas lights, and drugs. He dresses like a cross between Che Guevara and Hunter S. Thompson, but without the political stances or writing talent of either men. Randy steals food, brings his friends over to property that isn’t his, and makes himself a general nuisance. He plays a leech, but from the style of comedy he’s meant to be loveable, even when he’s throwing up on the front porch alongside his hippie commune friends. From the first few minutes of the film, it’s hard to figure out who we’re meant to root for.

Blake (Mike Castle) begins to appeal and appease to Randy’s lifestyle choice. Archaic, borderline foolish representations of drugs, alcohol, and partying antics are thrown in without care or concern for how outdated their tropes and stereotypes are. Shore hasn’t aged past his 90s stoner phase, the persona that shot him to brief stardom, but fizzled him out rather immediately. The most achingly dull and bland of challenges are presented to our newlywed couple, and all of it comes down to a squatter in their back garden. Not being able to shift him out of their home causes problems for the two, and what should be a rather swift call to the police is stretched over ninety minutes and a timeline that spans nearly a year.

A whole host of random celebrity cameos are scattered throughout. Who would’ve thought Hacksaw Jim Duggan, Billy Zane, and Steve-O of Jackass fame would all appear in the same film. It feels like their sort of film. One a washed-up wrestler, another who made a living climbing a rope across a pit of alligators with a chicken stuffed into his underwear. It’s not a high bar for those involved, but Steve-O’s involvement in particular is the most concerning of all. His role as Shredd is a watered-down version of his Jackass era persona, one that he hasn’t grown out of. Headbutting walls, flying through glass windows, and that’s only the first scene we see him in. It’s quite sad in a way, but nothing is sadder than seeing Pauly Shore shuffle around in a vest.

Guest House is pathetic. Usually I can give these lower-budget films the benefit of the doubt, but Macaroni has stirred up a completely asinine, disgusting portrayal of comedy films. If this were seen with a wider release then Macaroni and his crew would have set the genre back three decades. The frat lifestyle is thrown together with disgusting disregard for actual comedy. Poor writing, exploitative content that seems to appear rather frequently in the career of Macaroni. Let’s hope it never sees the light of day ever again, for the sake of audiences everywhere.