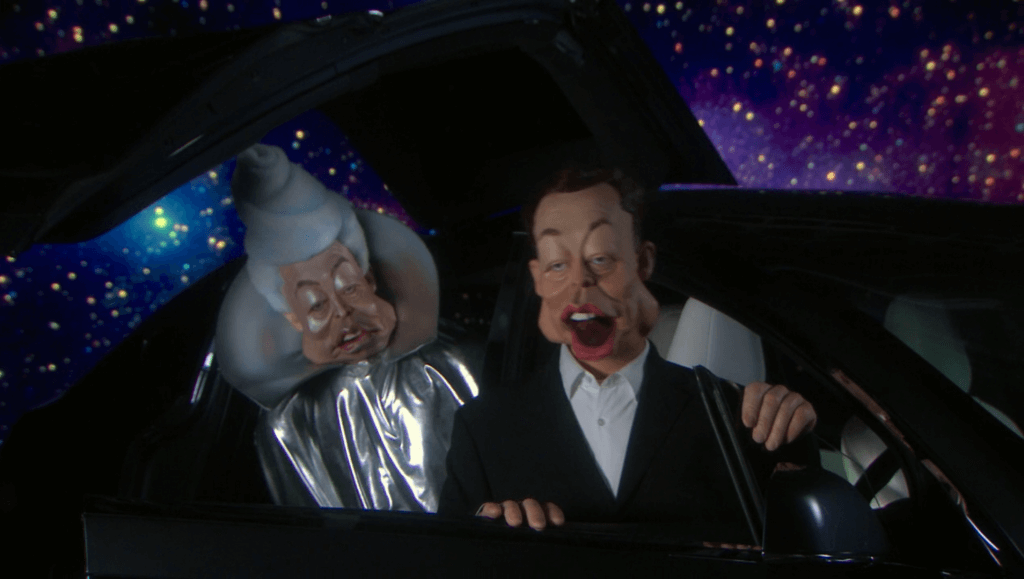 With the understandable difficulties of the pilot, the Spitting Image reboot stumbles its way into a second episode. Holding all the confidence of a drunkard traipsing up a flight of stairs, it’d be a genuine miracle if the cast and crew could inject some nail-biting satire or hilarity. Still, in a world where material is in abundance, we can judge this latest Spitting Image episode not just on the quality of writing, but also the scope of topics.

Blurring reality with puppets further and further, this episode marks a great deal of new puppet debuts. A forgettable appearance from Elon Musk, along with some bland sketches featuring Nancy Pelosi, and Emmanuel Macron is just about all we receive. These introductions jump from being extremely bland and obvious, to incredibly out there but somehow not that interesting. Musk as a David Bowie, Mars-obsessed spaceman forces us through the stapled-on musical number, which could really use some work. On the other hand, we have Emmanuel Macron, whose one joke for the whole show is that he likes to lick the face of Angela Merkel with a comically long tongue. Comical if revel in the foundations of toilet humour, gratingly strange and boring if you feel inclined to enjoy impressive mockery of world leaders.

It’s not all bad though, it has the enjoyable moments from time to time. Far less than the first, but Mike Pence trying to hide from Nancy Pelosi and other women because he’s a religious nut feels like a cheap shot, but the results are enjoyable. Jurgen Klopp’s never-ending positivity in the face of abuse is superb, spinning a happy spirit on receiving a brick through the window from Everton fans. Dominic Cummings provides highlights too; his alien shtick is great and one of the few highlights of the show. It feels rather brief in this episode, though, but still articulates some rather comical plans to take the Northern vote and have them working in mines near the core of the Earth. A joke that, above anything else in the show, feels like there’s something to unpack, an idea that isn’t hoisted in the face of the audience. A rare occasion I hope we see more of.

The problems of the first episode are still prevalent, even more so here. Another rendition of Trump and an embodiment of the coronavirus being best of friends, but the jokes are flat and nonsensical. Writing that feels as if it’s unable to keep up with scathing one-liners on Twitter, such is the problem of the age of social media. Everything within the show has gone through the cycle of news already, there’s rarely a moment when scrolling that you won’t see the likes of Trump, Johnson, or Klopp. To make jokes that are inferior to those penned by James Felton or the average punter on Twitter is a gravely embarrassing scenario for those paid shedloads to do it.

Far weaker than the first episode, and with no standout moments to look back on, it’s nice to see my fears of early filler episodes encroach on Spitting Image so soon. It’s still too early to tell whether or not this will be a recurring theme, I’m sure later episodes will shed some light on that, but the shaky start the series had is beginning to topple towards complete disaster.