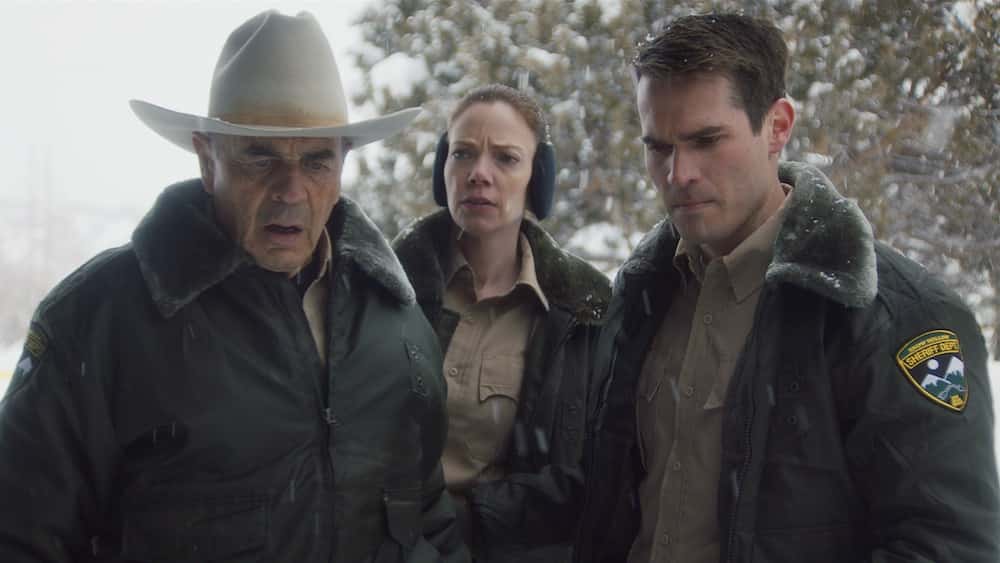 After director Jim Cummings brought us a lovely rendition of Thunder Road, he’s now turned his attention to the grim world of police work and murder. His latest feature, The Wolf of Snow Hollow, relies on his identifiable directing tropes, whilst bringing us a tale of murder, the impact it has on a stressed cop, and the community he polices. A film that offers up the snowy setting of Fargo, but with a startling mixture of sci-fi elements, horrifying monsters, and some cool action set pieces. It has a lot going for it, but not much in the way of consistency.

A couple of transition shots and pans that feel oddly out there, especially for Cummings’ work. He doesn’t take command of the tropes as he should, and there are times where his direction goes from faux innovation to stale as he attempts to capture what great work he provided with Thunder Road. He shows little in the way of real progression as a director or artist, the usual slow-zooms, and spinning camera are all there, but there’s no calculated risks, it’s comfortable floundering in its safe, static patterns. The deadpan approach doesn’t work, and with Cummings giving away the reveal of the beast rather early into the film, The Wolf of Snow Hollow does very little to reclaim the lost ground. However, as a performer, Cummings basks in being the centre of the piece, as great an on-screen talent as he was in Thunder Road. The film does have some decent cast members, from Riki Lindhome as the plucky, talented officer, Julia Robson, and Robert Forster as the ageing sheriff.

It’s always nice to see Forster, though, and although he tries his best to cut through the swathes of underwhelming writing, he can’t quite manage it. A couple of solid lines, he plays John Marshall’s father, Hadley, as well as he can. The jerky, awkward nature doesn’t work without Cummings at the centre of it all. An opening scene that doesn’t quite pack a punch is a sign of things to come. Muddled writing seems to be at the core of this one, the film never quite hits its stride until much later on. Toying with tropes and never letting them breathe all that well, it’s upsetting to see how mixed a bag this is.

A stacked cast that have more or less nothing to do, The Wolf of Snow Hollow is an underwhelming experience, a shame too given the talents Cummings presented in Thunder Road. Similar characters, different settings. It takes some time to warm to, but by then it’s too late. With a murder mystery at its core, it’s a sad shame just how little of it matters. Cummings’ manic performance and a couple of enjoyable supporting actors are all well and good, but it can’t quite keep up with some thoroughly underwhelming writing and some surprisingly poor pacing.