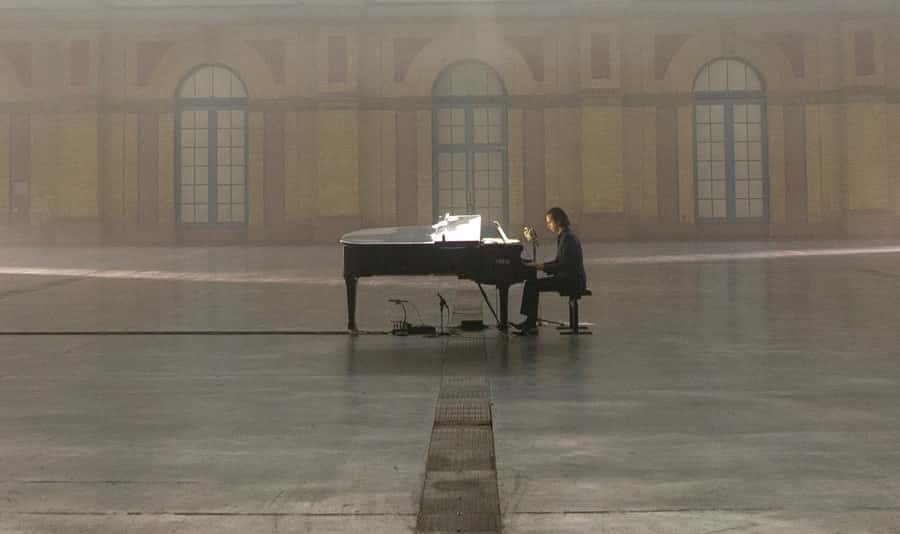 As a tough year gets tougher for those in the creative industries, it’s looking less and less likely that we’ll be seeing any crowded concerts this year or next. A deep shame, the one concert I’ve ever been to was great, so at least I’d gotten my fill of entertaining activities before I locked the door to my home and hunkered down with some chicken soup and a copy of Stop Making Sense. Live music may be in limbo, but Nick Cave is having none of it, putting out a surprise concert, isolated with nothing but a piano for company in Idiot Prayer: Nick Cave Alone ay Alexandra Palace.

Isolated in a near-empty room, Cave pushes through new material, all stripped down to their most simplistic, primitive sounds. A Fazioli piano and its performer is all that’s required for this tremendous performance, which brings unheard work together with one-man performances of classic tracks. We don’t communicate with Cave, nor does he show any recognition of knowing we’re watching him. He doesn’t turn to camera, and his musings are almost all lyrical, except for a brief thought at the start, said to nobody in particular. It’s fascinating, most live sets thrive off of the energy a crowd of dancing, sweaty, drunk people can bring, but Cave finds comfort in the silences. His voice booms around the grand, secluded room, a fitting backdrop for a succession of bleak, beautiful lyrics.

Powerful lighting booms through the room, notes and scraps of paper strewn around the foundation of the piano, it’s as if Cave and his instrument have been plucked from the recording studio and placed into the centre of a historic entertainment venue, one used as a backdrop to emotive performance and incredible lyrics. His delivery is on point, renditions of mostly new work conquer the running time, serving the inevitable prospect that we’ll be hearing more of him in the months ahead. I can only imagine the usual synthesizers and ambience will be included, as is the form of later Cave works, but his lyrics are jarringly old-school. They knock back the spoken pop soundscape, appealing more to the gothic blues of his earliest days of recording.

A taster for their upcoming album, Idiot Prayer: Nick Cave Alone at Alexandra Palace provides a glimpse at the creative work we’ll be graced with in the years to come. A surprise, especially considering the large breaks between album releases, but a welcome one at that. A film that relies solely on how much you can connect with and enjoy the work of this latest album, and, by the sounds of it, it’s a step in a fresh, invigorating direction. More or less a reminder than a new album is coming soon, I can think of no better way to promote it than to hear it live before its release, no greater way to revel in the talent than to access it before its full, orchestrated release. We’re given the foundation, the blocks are yet to be put in place, but I hope they appear sooner, rather than later. Idiot Prayer: Nick Cave Alone at Alexandra Palace is a beautiful rendition of unreleased tracks from a man whose mind is always focused on ingenuity.