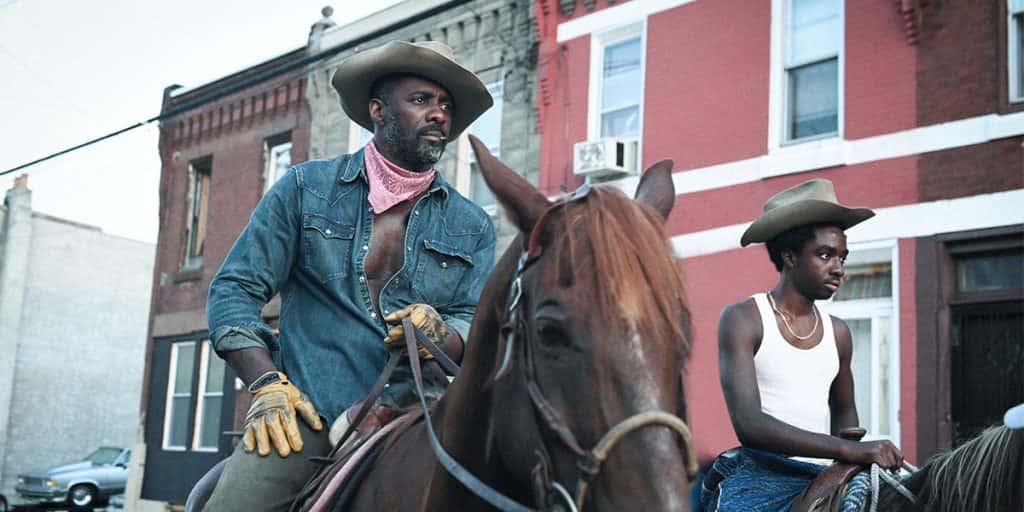 Neither concrete or cowboy, Idris Elba lives what I assume are his wildest dreams in Concrete Cowboy, a debut feature from Ricky Staub. Made of flesh and bone rather than cement and whatever it is you mix with cement to make it stick; this latest Elba-led piece throws us into a subculture where the wild west didn’t quite die out. Its links to the western genre start and stop with the use of “cowboy” and a couple of hats, but the understanding and mutual respect between the old and new waves of filmmaking are an incredible treatment to behold. A vitally strong drama, where, at its core, gang warfare and gentrification reigns supreme.

The modern adaptation of a loose and free style of living is a rather remarkable one. We follow a group of characters with a real love and fascination for the simplicity of horse riding, but graciously accept the benefits of modernity. Horse riding is still prevalent, and it serves as a surprising cornerstone for the narrative. Elba and Caleb McLaughlin make for a convincingly great father and son duo, superb chemistry between the two leads to an interesting consistency found within a community who live inside of their own, perfect bubble. It’s a shame when that bubble is, inevitably, popped. But picking up the pieces is showcased just as well as the rise and fall, it makes for a resounding, heartfelt showcase of just how integral a reliable community is. Neighbours, friends, and family that you can rely on in the toughest of times, the camaraderie shown in Concrete Cowboy is admirable.

An engrossing performance from the up-and-coming McLaughlin makes for a generally sentimental and well-rounded take on a script from Staub and Dan Walser. This writing pair muse on gentrification and oppression rather consistently, their performers produce a great story. There are times where sudden or shocking moments feel a tad muted, but the overall product is a commendable one. There are moments too, especially towards the end, that feel slathered in sentimentalism, with a real focus on these aspects coming all too often towards the end. It’s as if the film realises it hasn’t had that ever-engrossing emotive scene that bags the awards, so throws in far too much right at the very end. It’s jarring, but not jarring enough to ruin the consistent narrative provided earlier.

As much a modern drama piece as it is a fly-on-the-wall treatment of a fractured father and son narrative. There are no gun-toting standoffs, nor are there any spurred, lone wolves hopping from town to town, perhaps I was taken away on a wave of hope after seeing Idris Elba on horseback with a cowboy hat. Instead, we focus in on a dynamic, well-thought relationship. How a man copes without the father figure in his life, the reliance on old friendships, new bonds, and a life of rebellion, Concrete Cowboy documents this with startling maturity and descriptive prose. Preserving our heritage is important, and to do so is far more challenging than it should be, especially for those found within Fletcher Street. Concrete Cowboy hopes to shed light on that, and it does so with an expected grace and style.