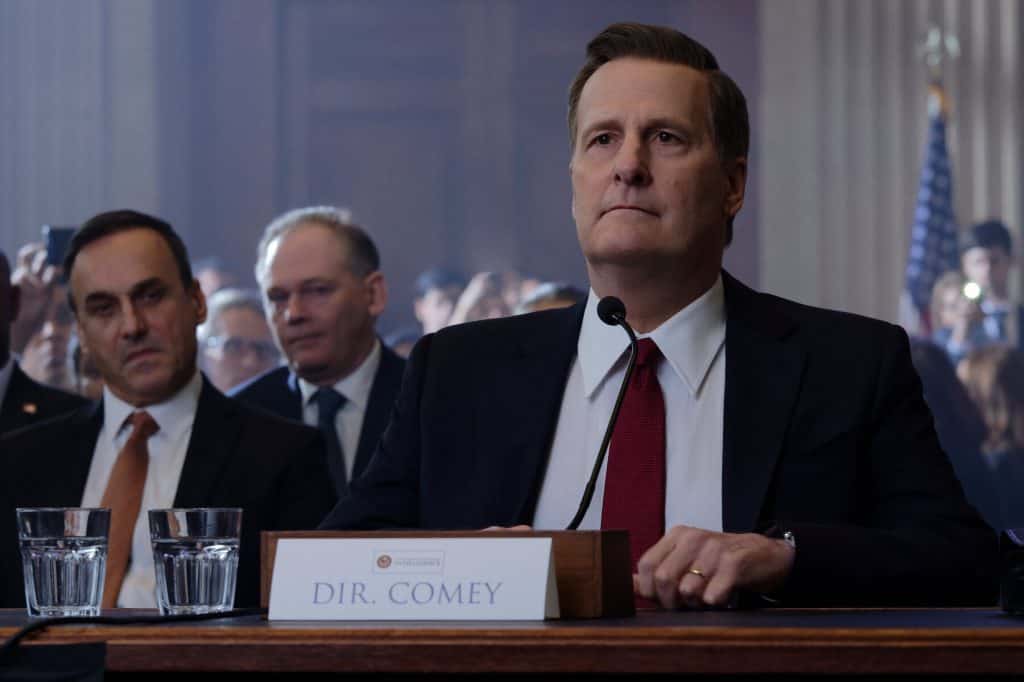 If the cold-intro provided by Stephen Colbert wasn’t bad enough, The Comey Rule doubles down with an acoustic musical number cursing the life and times of former FBI Director, James Comey. Once more played by Jeff Daniels, The Newsroom star has fallen from the pillar he once found himself perched on. Still, much like I have, he musters up the courage and soldiers on through a second episode of The Comey Rule, one that wishes to discuss the fallout of the 2016 election. My sole reason for stumbling my way through this episode was to see Brendan Gleeson’s performance as 45th President of the United States, Donald Trump. A fascinating role, I’m sure, the Irishman has plenty of work under his belt, but The Comey Rule looks to dismantle that one scene at a time.

Gleeson’s role is, for lack of better words, embarrassing. Mimicking Trump by copying and pasting his Twitter feed into the script, he grapples with a script that feels so deaf to the real issues feebly presented by writer and director, Billy Ray. He’s not got the strengths as a writer necessary to bulk this one up. Clocking in at a touch longer than your average feature film, you’ll be surprised to find about a half hours’ worth of content. The rest is complete filler, nothing but the jargon and ineffectual shock that we felt four years prior.

A fair few implications and rumours are thrown into the mixture of this one, the biggest issue The Comey Rule has is that its adaption of a modern, ongoing case, has to stick to what we know. What we do know, is very, very little. It’s all speculation, behind-the-locked-doors of the real world, and a detestably bland story comes out of it all. There’s nothing here that strikes me as interesting or engaging, which is a shame since this is, to an extent, meant to be a call to arms of sorts. Trump’s alleged collusions with Russia, and the controversy surrounding the dismissal of Comey is ripe for the picking, prime television if adapted correctly. It gets nowhere, though, it’s offensively dull. Nothing wrong with the narrative it chooses to take, but the lack of flair or style within is cause for real concern.

Monstrously dull, throwing buzzwords around and seeing what sticks, The Comey Rule minces words and meanings with relatively bland moments and faux tension that fails to capture the controversy and criticism thrown around at the time of these events. Flat nothingness, a void where a story should be, and it’s not like we’re missing much anyway. Flick the news on, you’ll probably catch a nostalgic tribute package to this period of history. We’ve been catapulted through a decade’s worth of history this year, and any semblance of relative normality, however horrid it may be, could provide some comfort in this time of a global pandemic. It’s far better than being bored to tears, watching The Comey Rule and eating your way through the endless tins of soup you’ve surely stockpiled.