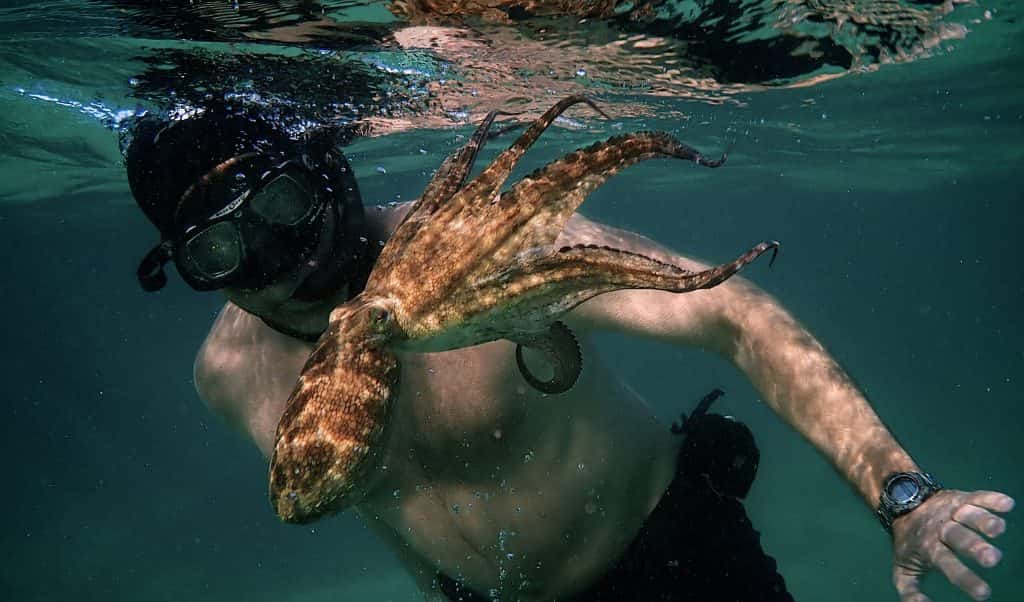 Ever since Ringo Starr penned a, frankly, poor song about these eight-legged, aquatic monstrosities, my hate for octopuses has grown and grown. Starr may have sung about swimming about in the garden of these land hating appetisers, but I fear the day I pop my head too close to the ocean and an octopus leaps out at me like a face hugger from Alien. It’d take a lot of work from My Octopus Teacher, this latest Netflix documentary, to convince me that they’re hapless, friendly individuals who wish to work with humanity and share the mysteries of the deep blue sea with us.

How much of this I believe is relatively dubious. The exotic, unique realms of underwater are captured well, some nice photos here, but the narration and how the ocean helps us find ourselves is where the film ends up on thin ice. I think it’s great that people can find healing or cleansing with nature, but I filter those people into those of us who use emojis or unironically say “Live, Laugh, Love”. Maybe my dislike for nature documentaries stopped me from fully connecting this one, but it’s a boring experience. Considering the octopus as “a snail who lost his shell” is a rather odd and most likely a biologically incorrect way of explaining what an octopus does. Still, by the end of this documentary, I’m still not sure what they do.

The best documentaries rely on interviews with a variety of experts or interesting characters, but My Octopus Teacher relies on some truly questionable narration from the man at the centre of it all. There’s no octopus expert or sea extraordinaire to call him out on statements that may be riddled with lies. Some moments come across as dense and rather devoid of logic, cowering behind emotions and rather bleak notions of how close this man is to his eight tentacled friend.

Water propaganda, trying to paint these horrid, tentacle-clad monsters in a light that doesn’t show them as the scoundrels they are. My Octopus Teacher has such fluttering potential, one consistency Netflix has for us these days is their ability to throw quite a lot of money at subjects and documentaries that would barely scrape through on BBC4. Still, I’m not sure how much we are meant to take away from eighty minutes of a man who feels he has a fascinating connection with octopuses. It’s not all that fascinating, but it’s a pocket edition of David Attenborough’s attempts at diving deep into the ocean and documenting the creatures of the deep.