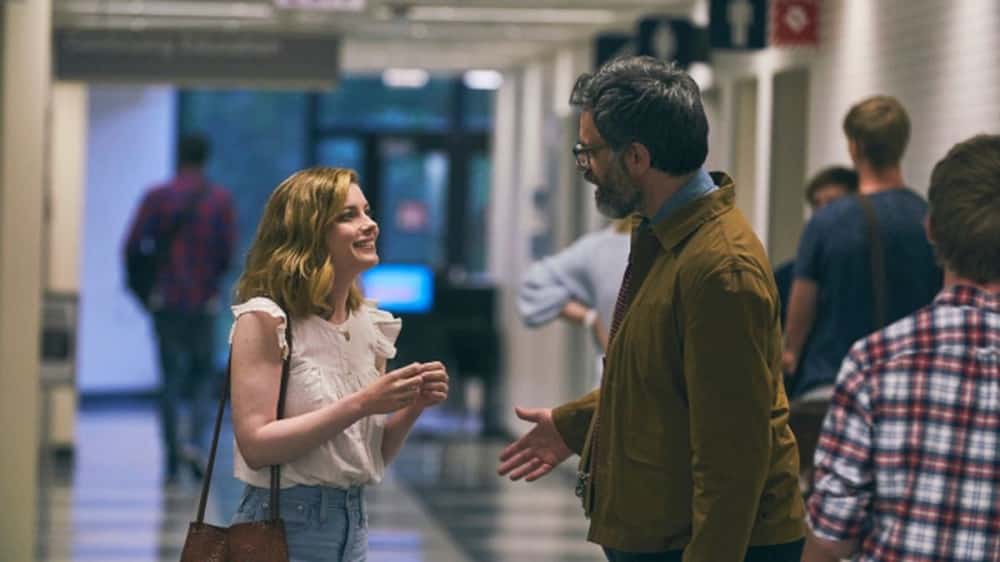 Calling back a former student to talk about their success and book deal, the fictionalised events of I Used to Go Here follow the optimistic, yet deflated lifestyle of Kate Conklin (Gillian Jacobs), as she makes her way back to her alma mater on the request of her former professor, David Kirkpatrick (Jemaine Clement). It’s not something she inherently wants to do, that much is clear from the opening moments, but this film from director Kris Rey is just as much about acceptance of failure as it is about picking up the pieces, dusting yourself down, and moving forward. This style of clunky storytelling is frequent, and there are no surprises to be found throughout.

But don’t write I Used to Go Here off just yet, for all its faults, it has some nice moments to it. Not enough to salvage the film as something wholly enjoyable, but enough to carry it across the finish line. There’s something forgettable, yet wholesome about this sort of film. They’re ten-a-penny, consistently wavering on the tightrope of mediocrity, but sometimes they’ll offer up some moment that strikes of genuine heart and soul. Lightning in a bottle captured in just a couple of scenes. Unfortunately, these few scenes provided to us by I Used to Go Here are nowhere close to bringing a resounding conclusion or appetising story.

Rey’s direction is the usual slew of sloppy mediocrity you’d expect from this sort of film. Another filler title that will do nothing but cement this director further and further into the typecast. A shame, too, since it’s clear that Rey does have some sort of voice to offer us, she never gets the chance to fully explore it here, though. She’s lucky to assemble a solid cast, but the restraint felt on the film is tragically underwhelming. Jacobs and Clement stagger from scene to scene with little energy or chemistry to show for it, but they do manage to play well in the moments they share together, a not entirely convincing story, but one that’ll be all but forgotten a few days later.

Charming, inoffensive, and harmless. It’s everything you’ve seen before, but with a lovely cast of comfortable, well-acted caricatures of the genre. Nothing that will inspire you, nor can I see this one becoming a favourite of just about anyone down the line. The intended audience for this film has already found their cosy favourites in The Re-Write or Midnight in Paris, two films that toy with a loveless writer struggling in an environment completely new to them. I Used to Go Here neither innovates or infers strong protagonists or engaging writing, and it’s at the detriment of a director finding her feet that we’re in a position of mediocrity.