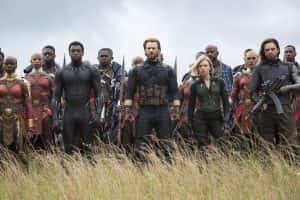 ‘Avengers Infinity War’ was originally announced all the way back in October 2014 – Nearly 4 years ago – with Marvel and Disney building up to it since Marvel’s hit ‘Guardians of The Galaxy’. Infinity War promised fans an experience that would bring the Avengers, Guardians of the Galaxy and other characters like Doctor Strange together. Did Marvel pull it off?

‘Avengers Infinity War’ is one of the best Marvel movies to date and saying it is “good”, is an understatement.

Marvel movies such as ‘Guardians of the Galaxy’, ‘Ant-Man’ and ‘Iron Man’ in the past have been entertaining but have had many flaws like terrible villains and being quite predictable. But for the 19th film in the Marvel Cinematic Universe, Joe and Anthony Russo (‘Captain America: The Winter Soldier’, ‘Captain America: Civil War’) fix these problems. Thanos (Josh Brolin) is possibly the best Marvel villain, his motivations are quite clear and understandable and at some points you even empathise with him. At its heart, ‘Avengers Infinity War’ is a Thanos film as the “mad titan” portrayed by Brolin having the most screen time out of the massive cast and the plot revolving around him. However, the smaller villains were very under used with ‘Ebony Maw’ portrayed by Tom Vaughan-Lawlor being the only one who stood out. A surprise cameo was ‘Captain America: The First Avenger’ villain ‘Red Skull’ who was briefly in the film.

The cast for this film is impressive. It felt like everyone put in their all, even actors like Paul Bettany and Elizabeth Olsen which were quite weak in previous instalments of the franchise, were very entertaining and gave genuine emotional performances. The stand outs were easily Chris Hemsworth as ‘Thor’, Zoe Saldana as ‘Gamora’ and Chris Pratt as ‘Star Lord’ as they delivered incredibly emotional, funny and entertaining performances. Every character had their moment despite feeling like they were barely in the film. For example, Sebastian Stan’s ‘Bucky Barnes’ felt like he was in the film less than 5 minutes but still had a brief, memorable scene with Bradley Cooper’s ‘Rocket’. Two noticeable absent characters are Jeremy Renner’s ‘Hawkeye’ and Paul Rudd’s ‘Ant-Man’ – fans will have to see ‘Avengers 4’ (2019) and ‘Ant-Man and the Wasp’ (2018) to see these characters again.

Even though a lot of the film was made using CGI, the film looks great. Locations used like Atlanta, Edinburgh and Durham were very impressive and work very well as the backdrop for the film.

The film had great action and character introduction with the stand out scene being when the ‘Guardians of the Galaxy’ meet ‘Iron Man’, Spider-man’ and ‘Doctor Strange’. The line “I’ll do one better, why is Gamora?” delivered by Dave Bautista’s ‘Drax’ made me laugh both times I saw the film. The humour of the film is great and consistent throughout, with most coming from the ‘Guardians of the Galaxy’ and in particular from Chris Pratt.

Many fans may be annoyed by the cliff hanger ending Marvel left. The ending, which involved characters such as Spider-man, Doctor Strange and Black Panther seemingly being killed off, was a great twist as many fans were expecting characters like ‘Captain America’ to bite the bullet. However, fans can be reassured that there is a high chance they will return as a ‘Spider-man Homecoming’ sequel and a ‘Black Panther’ sequel are already in production. Tom Holland’s performance during his apparent death was quite emotional and moving as we see him tell Robert Downey Jr’s ‘Iron Man’ that he doesn’t feel so well and acted as a final kick to the balls for the audience. It will also be interesting to see if Marvel do bring back the killed off characters that didn’t die during the ending – such as Gamora (Zoe Saldana), Vision (Paul Bettany), Loki (Tom Hiddleston) and Heimdall (Idris Elba). Fans will have to see the untitled ‘Avengers 4’ in 2019 to see what happens next.

‘Avengers Infinity War’ is one of, if not, the best Marvel movies of all time with it being a must see for any fan of these characters. It had amazing performances from the massive cast and Brolin makes for a great villain with ‘Thanos’.