REVIEW: How To Get Away With Murder Season Four 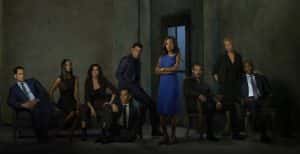 How To Get Away With Murder has two personalities. Firstly, its murder-frenzy side. These episodes are fast-paced, shocking and extremely engaging. They make it difficult to look away from the screen and make waiting for the next episode excruciatingly hard. The other, is more in-depth and thought-provoking – like a wiser older sister. They look into the character’s deeper feelings and the effects the fast-paced events has had on them as people.

The series follows lawyer Annalise Keating (Viola Davis) and her top law students as they get into a range of serious incidents during their time at law school. The three previous series have all been focused on murders which they have partaken in, and take you through how they cope with the aftermath.

All of the Keating’s (which were Five, but are now down to Four) return in this season, as well as colleagues Bonnie, Frank and Nate. We also meet new arrivals including Laurel’s mother, Nate’s Dad, and a new, troubled, character Isaac. The team are still up to no good, with Laurel plotting against her father in revenge (which of course ends up with possibly deadly consequences).

The series started off strong, following HTGAWM’s infamous flashback countdown leading to the big reveal in episode eight, which is the most emotional episode since the series began. The graphic nature may have been too strong for some, but it gives the episode what it needs; raw emotion. I’d imagine a cinema room full of people to be silent during this scene, even if the audience had never seen the show before. After that, no episode could compete. The rest of the season is more focused on serious issues. Addiction is one that is looked at very closely, with Annalise battling with her alcoholism. Mental health is another theme shown through Laurel and her mother, and Nate’s Dad who has been in solidarity confinement for years.

Asher and Michaela have some trouble in paradise, and Nate seems to only get airtime in his whistleblower car park meetings with Annalise and Bonnie. But for season four, it’s Karla Souza (Laurel) and, of course, Viola Davis who’s acting carries the season’s performance.

The switch from HTGAWM’s murder-frenzy episodes, and their thought-provoking, character development episodes, usually gives the series a nice balance. But for series four, the majority of the heart-palpitating episodes only last up to the mid-season finale. The following seven episodes aren’t near enough as shocking. Instead, they focus on more serious issues such as mental health and Annalise’s fight against the criminal justice system.

Despite, disappointingly, one of the weakest cliff-hangers in HTGAWM history, another season is pretty much confirmed in the final episode, which is something many of us are thankful for. We’re not ready to depart from Annalise Keating quite yet.

You can catch up on HTGAWM on Sky Living.