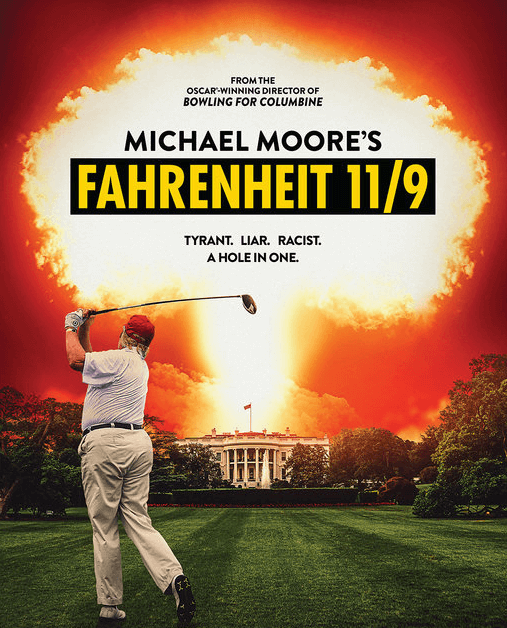 Michael Moore is quite genuinely one of the most prolific and enjoyable documentary makers around. He’s the American Louis Theroux, and that’s no small feat.

I hate to say cliché taglines such as this, but Fahrenheit 11/9 is probably the most important documentary to release in the past few years. Its dissection of Bernie Sanders’ election run, the liberal right of America, Flint’s water problems, the rise of Trump, the problems of the Democrat party and more is ample enough to provide a scary two-hour documentary.

Crying isn’t something I do, pretty sure I shed one or two tears watching Life Itself and Pulp: A Film About Life, Death and Supermarkets, but I don’t think works of non-fiction have put me onto an emotional level. But for whatever reason, seeing Bernie Sanders concede the election was enough to put me on the verge. When the documentary switches back to the problems with Flint’s contaminated water, the emotional wave is fairly clear. At times the documentary feels rather manipulative, but that’s all for the sake of driving home a larger point; that the people we’re watching in this documentary are in real danger of losing their lives.

It’s issue enough to have so many topics discussed all at once, and Moore makes it no easier by jumping between topic after topic, with no real connection between one or the other. The pacing of the movie is completely destroyed. One minute we’re discussing Trump, the very next we’ve moved on to talk some more about the lead up to an election. It’s all over the place and at times does lose its focus. It’s this sporadic decision to focus on everything and nothing all at once that show how clearly broken the American way of life is.

But Moore is slow to establish that his fight is not against the Republican party, it is against the system of capitalism and the mainstream of politics. Criticisms flow from all sides of the debate in a well-balanced documentary that manages to highlight numerous problems of both the Democrats and the Republicans. What Moore manages to capture so perfectly well is that times are slowly changing within America, and it’s thanks to the youthful vote and the older generations lack of willingness in the face of change.

Moore’s vehemently strange acts of protest are forthright throughout, from spraying a Governor’s house with Flint, Michigan’s dirty water to attempting to perform a citizen’s arrest; it’s a nice return to form ever since the lull that came post-Sicko. His documentaries prior to Fahrenheit 11/9, especially Where to Invade Next? lacked that Moore charm and felt more stock and filler than anything else.

Probably the most disgusting and difficult to watch documentary Moore has ever put out since Capitalism: A Love Story, Fahrenheit 11/9 may seem like just another Trump bashing party, but after the twenty-minute mark, it becomes clear that Moore is insistent on taking on the entire country and its deep-rooted problems. A dark humour underlying some truly serious and often overwhelming revelations, Moore’s Fahrenheit 11/9 is an eye-opening documentary studying the current state of the United States’ democracy.

Teachers on food stamps, poisoning an entire city with contaminated water for the sake of a profit, rigging Democratic primaries to stop a left-wing takeover; Moore’s topics often gravitate towards fear-mongering, and it would be such a message if it weren’t completely true. Uncomfortable to watch and his best work since Capitalism: A Love Story, Moore seems to have a fire in his belly, which is letting him bring out his A-Game.