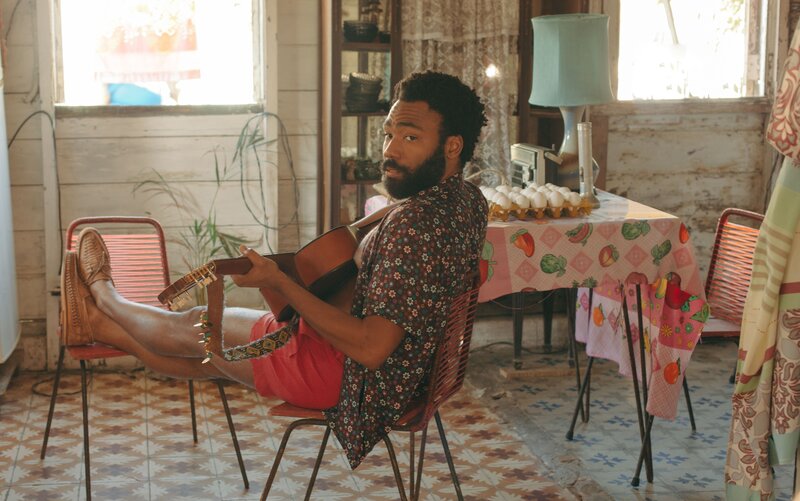 If you’ve ever seen or heard of Childish Gambino (aka Donald Glover) and his music, you’ve already seen a good chunk of Guava Island, his latest project. Personally, I’m not a fan of his music: I appreciate the cultural relevance of it, but my taste in music is just tonally different to Gambino and his outputs. That’s fine though, since I doubt Gambino will be producing any Britpop anthems anytime soon.

Nevertheless I was eager to check out his latest project, not just because of the strangely short running time.

Unfortunately I was rather far away from the truth on that one. Clocking in at less than an hour and still struggling to fill your movie with a plot that will last that long is a red flag to say the least. Glover is relatively charming as ever, it’s just a shame he sidetracks into his music all too often and breaks the flow of the movie. It’s understandable that Glover/Gambino would do this though, since this is basically a vanity project promoting some of his songs. A breakout of This is America comes very much out of the blue and doesn’t really have too much relevance, but is still thrown in for whatever reason.

Some faults also lie with the supporting cast, consisting of Letita Wright, Rihanna and Nonso Anozie. Rihanna is a tad better than expected but the bar was set exceptionally low for her anyway. Given her performance in Valerian and the City of a Thousand Planets there wasn’t much to expect from her role as Kofi Novia. Wright’s role as Yara Love serves somewhat better, yet suffers similar problems to Glover’s starring role.

At least Guava Island proves that Donald Glover is fairly competent leading man material: if that were to be the take home message you get from Guava Island then so be it.

For me though, it’s just not interesting and that may stem from not having any interest in Gambino’s music. But soundtrack issues aside, the length of the film should’ve inspired more than just a middling plot and some fairly competent direction from Hiro Murai.

A real misfire this one, you’re not missing much from this short and sour Gambino latest.