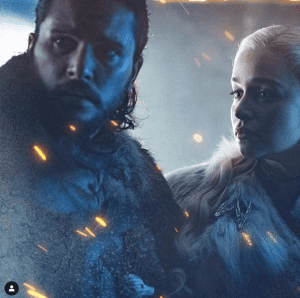 This episode of Game of Thrones (GoT) broke records for both TV and Social Media. It received nearly eight million tweets on Sunday night according to Mashable and was also the longest battle in the history of television! Coming in at a staggering and highly likely, UNBEATABLE 82 minutes, according to Fansided.

This was one hell of an emotional rollercoaster of an episode and I saw Rick Grimes’ departure from The Walking Dead in season nine! The show gave you no clear indication if they were going to win or lose the battle: one moment they had a handle on the situation, the next something happened which just threw that thought back out the window.

It starts off immediately off of last week’s cliffhanger: the army of the dead arriving on the outskirts of Winterfell. There is one thing I would like to know though – how do they know when to ring that horn! How can they see in the darkness without equipment to help them see in the dark?  They can’t exactly use torches as the enemy would just not go through them. I just assume they are doing something like this before the actually blow down the horn:

In the opening minutes of the episode, the audio is just utterly brilliant. It’s just quiet and the only sound is what little dialogue there is between characters.  It all builds up to the the ball-breaker: dragons screeching as they fly over Winterfell into the darkness.

This is what I meant:

This also led to a lot of tweets going out regarding the fact that it was barely possible to see what was happening. I, for one, had to close my blinds, curtains and ensure that there was NO light getting my sitting room when watching this episode. However, one fan went to twitter to help others tackle this problem.

Jon Snow’s (Kit Harington) direwolf, Ghost, made a reappearance in this episode, standing alongside Jorah Mormont (Iain Glen) before the battle commenced. However, it is unclear on the fate of the direwolf as it is last seen bravely charging along side Mormont towards the army of the dead – and then never again. I hope it lived, it has been a loyal companion to Jon ever since season one and I think the week has been emotional enough (this episode and Avengers: Endgame).

Ghost wasn’t the only thing to make a reappearance, Melisandre (Nathalie Emmanuel) aka ‘The Red Woman’ also reappeared, having last been seen in season seven.

The pyrotechnics were also on point in this episode. As the Red Woman embued the Dothraki swords with some sort of fire spell (as seen at the end of the video above) they just light up in some sort of fiery Mexican wave. Beautiful.

I was very surprised though that Davos Seaworth (Liam Cunningham) allowed Melisandre entry past Winterfell’s walls.  Given their dark past, I was sure he was going to give her no choice but to stay outside the protection of the walls.  However, after gaining entry, she told Davos he didn’t have to execute her as she would be dead before the next sunrise. She was correct – in a way – the sun was JUST rising.

When you consider the sheer size of the Dothraki army, every single one of them charging towards the darkness to the Night King’s (Vladimir Furdik) army, only for all of those fiery swords to be snuffed out, it’s scary thing to consider what is going to be retaliating back pretty soon.

This then led me to wonder if the producers took some inspiration from the Brad Pitt zombie movie, World War Z? Because after Mormont (without Ghost) returns with some of the fleeing Dothraki that survived, the dead charge towards them, climbing on top of each other, creating some sort of tsunami wave crashing into the defending Unsullied warriors.

As I take it, the large blizzard-type cloud that swooped in before Jon could execute the dead army commanders (or at least, dead army advisors?) acted as a smokescreen, protecting the charging dead below from dragon fire, while setting a clear indication that the Night King had arrived at the battle scene, somewhere in the cloud.

I knew some of the cast (though less than I was expecting) weren’t going to survive the upcoming bloodbath that was the battle of Winterfell against the dead army. I was surprised that Eddison Tollett (Ben Crompton) didn’t get the chance to help Jon with what was to come after.

The Hound, aka Sandor Clegane (Rory McCann) and Arya Stark (Maisie Williams) have a very weird, caring, friendship that has formed over the seasons. When he saw her run away from a horde of wights coming after her, he turned into this unstoppable monster, chasing after and protecting her when they encountered each other inside one of Winterfell’s buildings. This inevitably lead to the death of Lord Beric Dondarrion (Richard Dormer) as he sacrificed himself to protect Arya and The Hound from chasing wights, before they got him safely into a room (which The Hound quickly barricaded) where he died.

I loved the callouts of the earlier seasons that made it into this episode. The first one I noticed was when Arya told Sansa (Sophie Turner) to stick them with the pointy end, when she instructed her to go to the crypts with the other non-combatants of Winterfell.  The next clear one I picked up on was when Melisandre asked the young Stark “What do we say to the God of death?”.   Both of these call outs were from season one of GoT, which made a lovely treat for the devoted fans. There are most likely other easter eggs and other callouts within the episode, but you would have to rewatch the episode repeatedly to snatch them all up.

When Jon and Daenerys (Emilia Clarke) finally encountered the Night King, I was very curious as to how they would defeat him. At first, it seemed nigh-on impossible for them to kill him, given the smoke and everything and the way they had the dragon-like dogfight above Winterfell. When he eventually fell off Daenerys former, now deceased and injured dragon, Viserion, and Drogon and Daenerys were hovering above the apparently uninjured leader of the dead army, when she said her iconic word “drakarys” (which resulted in Drogon breathing fire down on the king), I was sure he was done for.

After the fire subsided, I don’t understand how he survived it but it will probably be down to his icy superpowers that he held.

After Drogon and Daenerys fled away from the Night King (armed with a spike that killed Viserion in season seven), Jon gave chase after him. When the dead king turned around, raising his arms (which raised the dead), I was hoping Snow wasn’t going to be added to the killed list in this episode, I couldn’t do that again after season five!

The death of the Night King was a bit of a shock to me, especially since Arya was the one to kill him, yet I wasn’t expecting him to be killed off so soon. I knew he was going to die this season at some point, because this is the final season of the entire franchise and obviously he wasn’t going to win (though this is Game of Thrones we’re talking about).  There surely would have been a major outcry if they ended it that way.

However, I thought they may have left the Night King’s death until the bitter end, killing the dead king and Cersei Lannister (Lena Headey) both in the same episode or at least one after another.  I would also like to know HOW Arya got past a large group of wights and White Walkers, which allowed her the chance to get close enough to the Night King to stab him.

this is it. this is the tweet. #GameofThrones #got #aryastark pic.twitter.com/NSurTXn2i3

I would have loved Theon Greyjoy (Alfie Allen) to have lived at the end of the battle, he has been an entertaining watch over the seasons. We have gone from loving him, hating him, feeling sorry for him and then loving him once again! It’s just been unbelievable, I doubt I will see another character develop in another show the way Theon did in GoT – or at least for a while.

Well, just like my longest review to date (most likely), The ‘Great War’ is now over and the focus – with maybe another two filler episodes until then – will be turned onto Kings Landing as Daenerys plans to march to Cersei, overthrow her and take the throne. But who will be sitting down by the end of the season? Cersei? Daenerys? Jon?

We will have to wait and see.  In the meantime, here is next week’s trailer: