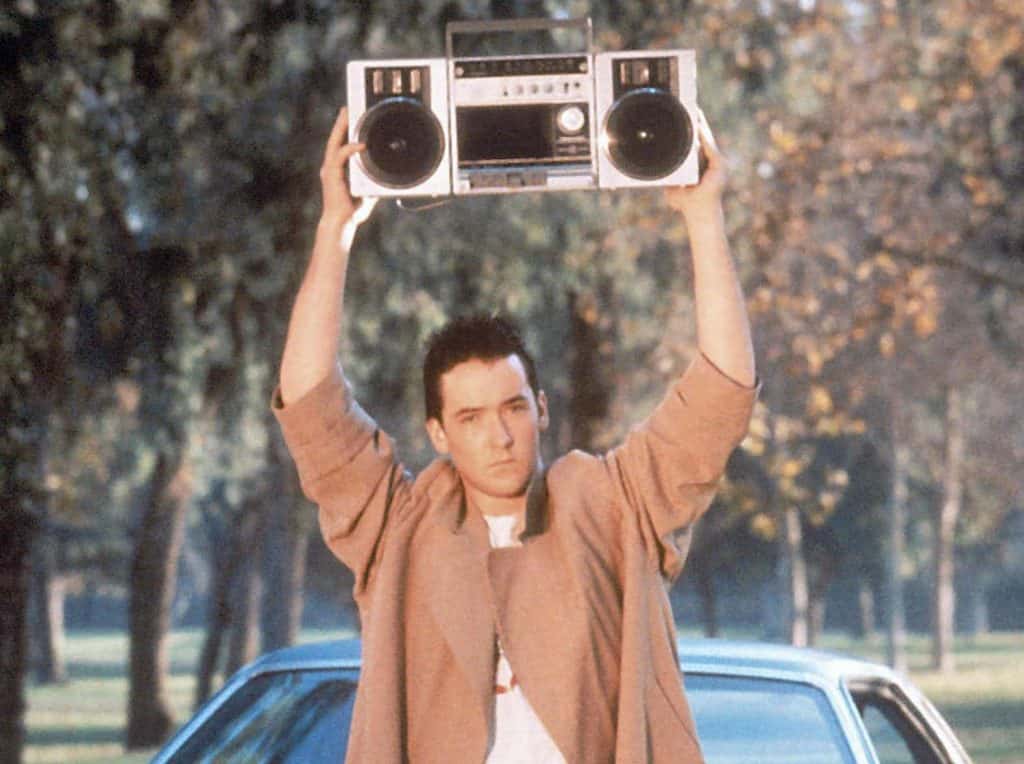 Somehow the late 1980s always provides some of the finest and generally well-rounded pieces of romantic comedy. Giving a huge kick to the profile of John Cusack, Say Anything is your standard romcom affair, yet without really trying it manages to excel with ease and provide one of the more fruitful outputs of the genre. Marking the end of the 1980s in style, this romantic comedy sets its sights on becoming the cliché hopeless romantic story, yet develops into something much larger than that thanks to some great performances, bolstering the film to its evidently high standard.

Cusack stars as slacker and general underachiever Lloyd Dobler, a graduate who falls for valedictorian and all round stereotypically smart girl Diane Court (Ione Skye). Her overbearing father, the divorcee Jim (John Mahoney) controls Court’s life as much as he can. That inevitably changes when the free-flowing attitudes of Dobler collide with the strict regiment of the Court household. Directed by the once prominent Cameron Crowe of Jerry Maguire and Vanilla Sky acclaim, Say Anything shakes some life into the dead romantic comedy traditions by injecting some solid writing and enjoyable characters into the mix.

As a fan of John Cusack and most of the works he has provided, it’s no surprise that his leading performance throughout Say Anything settles in as a thoroughly enjoyable lead role. Near enough his breakout piece, turning him from mere stand in background character to soppy, rebellious love interest is quite the big change for him to make but he handles the change with relative ease. Always putting himself in the right direction, Cusack’s performance as Dobler is a thoroughly enjoyable and memorable one. A handful of iconic scenes litter the film, one of the rare occasions where the film itself is outshined by one scene in particular, the rest forgotten to the inevitability of fading memories.

It’s a shame that Say Anything isn’t remembered for anything but John Cusack holding a large boombox above his head, blasting whatever pop song was relevant at the time. Let’s be fair, it’s 1989 so it’s probably Tears for Fears’ Everybody Wants to Rule the World. Ione Skye rounds up the other half of Dobler’s character, with a great performance from the now forgotten actress. Diane Court is a solid enough character, your essentially cliché – but extremely necessary – love interest that goes against the jurisdiction of her parents for the eventual betterment of herself. We’re lucky that Cusack and Skye have so much chemistry with one another, at the very least enough to get us through the entire film.

Suddenly though, the film doesn’t feel like a soppy romantic comedy. Throwing in some unnerving plotlines focusing in on Jim Court, we get the sense of more dramatic tensions circulating. Eventually they’re realised, and the full potential of the great John Mahoney is reached in insurmountably great fashion. A solid script from writer and director Cameron Crowe brings us to a great piece that works both as a light hearted romantic comedy, but also a deeper, tonally dramatic film.

This balance is greatly held throughout Crowe’s work in Say Anything, and that may be one of the many reasons why the film stands up as a certainly solid romantic comedy. Far exceeding the likes of its predecessors, and quite frankly passing by current iterations of the genre with relative ease, Say Anything is a classic of its genre. I hate to use the word, but that’s what it is. A Bonafide classic of the romantic comedy genre.