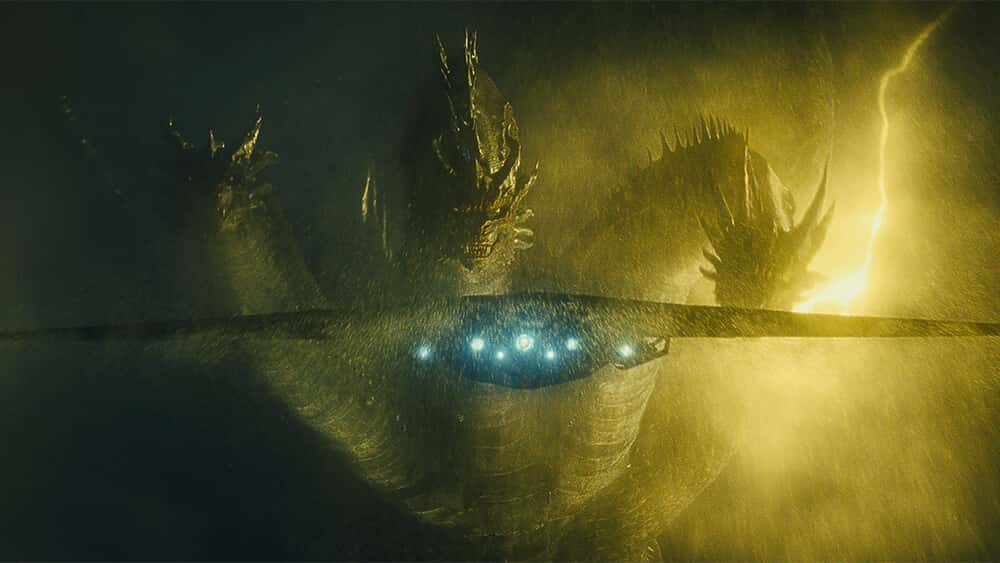 Big burly monsters leaping around shooting fire at each other for two hours doesn’t have the same appeal as it used to now that we know it’s all CGI and not men in costumes pratting about, slipping over and slapping one another. Godzilla has lost his scaly charm, and for better or for worse, it shows in Godzilla: King of the Monsters. A slapdash song and dance number where the song is roars and screams and the dance is petulant monster moves from a tiny setlist of recognisable characters that feature in the lore of the newly founded Monsterverse. You thought Kong: Skull Island was enough to kill off this new found dive into worldbuilding cinema? Think again, because Godzilla: King of the Monsters is everything you feared and more.

‘Zilla and friends are back in tantalisingly dull action as they romp around the Earth destroying stuff, screaming at scientists and harassing a terrorist played by Charles Dance. If that sounds exciting then don’t be fooled, because Godzilla: King of the Monsters is a dire, expressionless piece of big budget Hollywood film that does little to nothing to convince us that the relaunch of the classic, big screen legend is worthwhile. A sequel to 2014’s Godzilla was somewhat surprising, especially since that film did very little whatsoever, and aside from being a completely passable monster flick, did very little to celebrate the legendary monster in any worthwhile manner.

As impressive as the cast is, it’s sad to see that director Michael Dougerty fails to bring anything entertaining to the table. All it needed was a few beefy explosions and some tight action scenes, but even the few tense moments feel drab in comparison to the build-up and somewhat fumbled delivery of the original. Not the 50s original, or the 80s original. The remake of the remake that is now the original. As ever, Hollywood like to confuse things. At least the original (second remake) felt it had some consequence to the actions of the characters and the events that took place.

Puzzlingly enough, with such a strong cast it’s surprising how little can be done to make any of it come together in any engaging style at all. Every generic Hollywood trope carried over from the second film, minced down into the traditionally dreadful tropes that come from the genre and general monster movies.

If you’re looking for some modern Godzilla fun, then try Shin Godzilla, a near masterpiece of storytelling that builds a political thriller around the complete devastation and destruction that an evolving, villainous Godzilla provides. Godzilla: King of the Monsters feels more like the pauper of parodical disaster movies, a bloated CGI display that has little to no value when it comes to that of the big lizard that can breathe fire. Somehow, they made that boring.