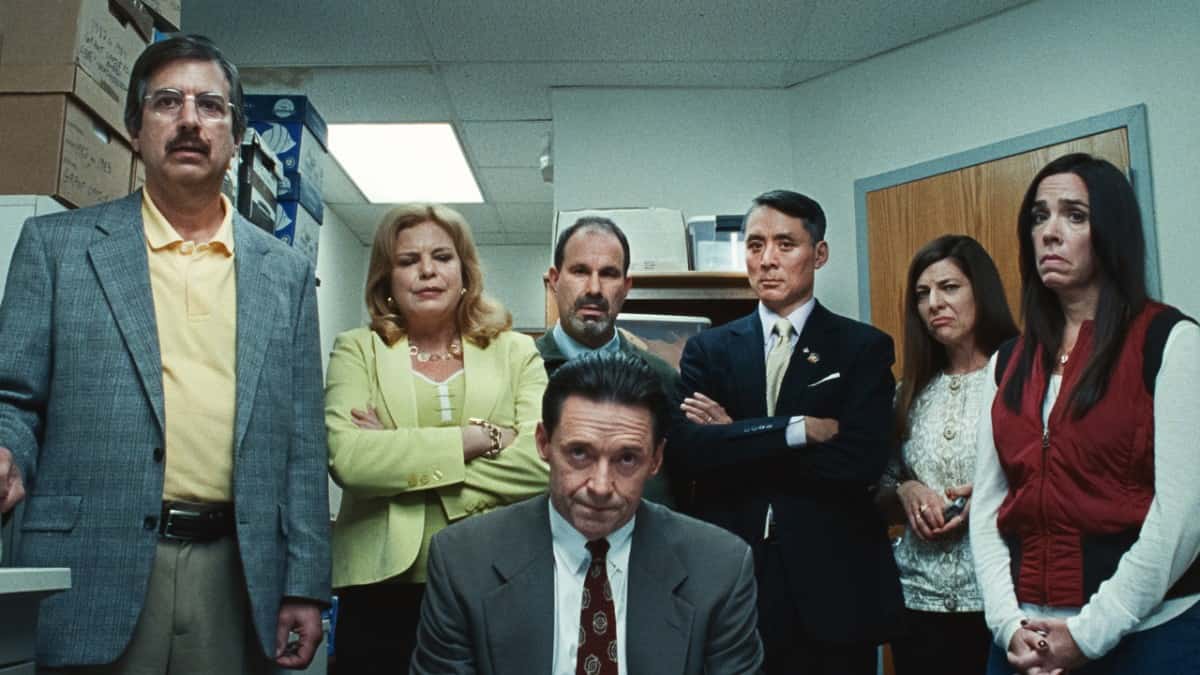 As we enter the fifth month of a truly rough year, it’s a mere insult to injury to throw another biopic into the festering mess of oversaturation. A biopic on just about every single scandal, celebrity and event are made in their masses. Eventually they’ll phase out textbooks and replace them with biopics. Why read up on Robert the Bruce when you can watch the thankfully forgotten adaptation of the same name? Bad Education, then, is the latest biopic from the brains over at HBO, based on the New York Times article of Robert Kolker, an uncovering of fraudulent expenditure under a school board ran by Dr Frank Tassone.

Tassone is played by Hugh Jackman in a career-best performance. His friendly nature and venomous behind the scenes actions create a nice mixture that takes his character from the high life to the inevitable lows that come from his actions. Jackman is both conniving and charming, a sweeping generalisation of Tassone is made, but it’s an engaging performance that brings out the best in the abilities of a fine performer. Although the film tries exceptionally hard to flesh out Tassone as a man, it doesn’t manage to overcome the main focus of the story. Thankfully so, but it’d have been nice to at least have a piece of emotion on display, Tassone is presented as gleefully invested in his students lives, but all of this crumbles away, and I’m not entirely convinced it’s all that intentional.

Thankfully, the strong performance from Jackman lays out the foundation of a riveting plot full of great build-up and beautiful pay-off. Allison Janney, Ray Romano and Geraldine Wisanathan make for superbly credible supporting cast members. Seeing the resurgence of Romano has been quite the mesmerising journey, and if he continues to churn out delicately forgettable yet remarkable performances then he’ll more than certainly carve out a very comfortable niche for himself. As for Janney, she too rides a wave of acceptably enjoyable supporting roles. Bad Education doesn’t give either Romano or Janney room for unique work, but the fact that they can provide engaging supporting roles is a comforting aspect of the film.

For the most part, the story is told in a moderately interesting fashion. Director Cory Finley brings a promising deal to the table, with Bad Education marking just his second film. Impressive work from someone with only one other film under his belt, Finley shows a natural talent behind the camera, with a great abundance of interesting shot stylings, camerawork and manages to get a great deal out of his performers. The doubt that Finley manages to bring to us in his story, the festering idea that maybe Tassone’s public figure was solely a façade, and nothing more, is brilliant. There isn’t a single flicker of acknowledging that his actions were wrong. Etched away in the strong script is detail, but for the story, not for the individual characters.

On a more personal note, Bad Education is a nice mediation on how great investigative journalism can lead to the uncovering of scandal. Finley and his impressive cast bring together a truly interesting story that those outside of the United States may not have heard about. It’s a great story on the whole, an engaging recount of events that will provide some great performances from established actors. Bad Education never tries to overstep its boundaries as a biopic film, it never sets out to be a mould breaker, but even then, it’s still a frightfully enjoyable experience that audiences should have no problem investing and engaging with.