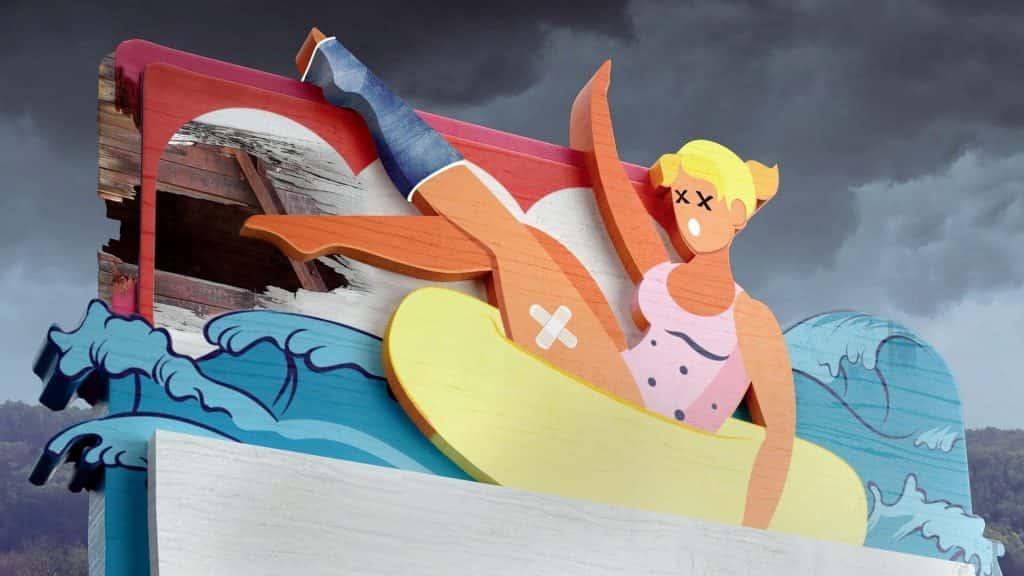 It feels like some years ago that the Johnny Knoxville led Action Point released. Perhaps, rather stupidly, I never made the connection between the title of that nauseous disaster and the literal, real-world place that inspired it all. My inability to connect the obvious aside, Class Action Park documents the very real horror and nostalgia held by a group of uncoordinated teens, reminiscing about a dangerous park that cost lives, caused controversy and created infamous internet legends. But the depth of the depravity on display here is shunted to one side, for pockets of wisdom from those who worked at and maintained the park, no matter how dreary the damage became.

Considering one of the main attractions of the park was a water slide that did a very small, sudden loop, it’s rather easy to understand why people were attracted to Action Park. It presented a number of adrenalin-pumping rides, and their aversion to basic health and safety didn’t seem to be any concern of the owner. Class Action Park is as much about the park itself as it is about the owner, Eugene Mulvihill. His crass attitude toward the park and its inhabitants aren’t really criticised all that much, not until the end of the documentary. Pacing is certainly an issue here, and for the most part we never really get to the interesting bulk until it’s far too late for it to make even the briefest impact.

A developer and entrepreneur who wanted to open a theme park. It’s clear from the observations given to us that Mulvihill had no idea how to run a place like this, but that was why Action Park became such a legendary attraction. Directors Seth Porges and Chris Charles Scott III do a solid job of bringing together an abundant deal of information on a topic that seems to have been lost to the forgotten recesses of the internet.

Despite eighty minutes of detailing the death, horror and destruction Action Park offered, the final five minutes wrap up the film by attempting to convince us that that’s a good thing. The adventurous nostalgia the youth of the 80s had for the park overwhelms reason and common sense. The respect and awe these people hold for those who survived the park, and those who ran the place, is rather eerie. Maybe it’s because I never went climbing trees and breaking bones as a kid, but those final moments of a half-baked message protecting the history of the park are comical, bizarre and so out of place that it ruins a great deal of what the documentary tries to say. It verges on being in poor taste, with battered and bruised former attendees defending the park with their lives, Class Action Park seems to have tapped into some form of unbridled love for death-defying participants.