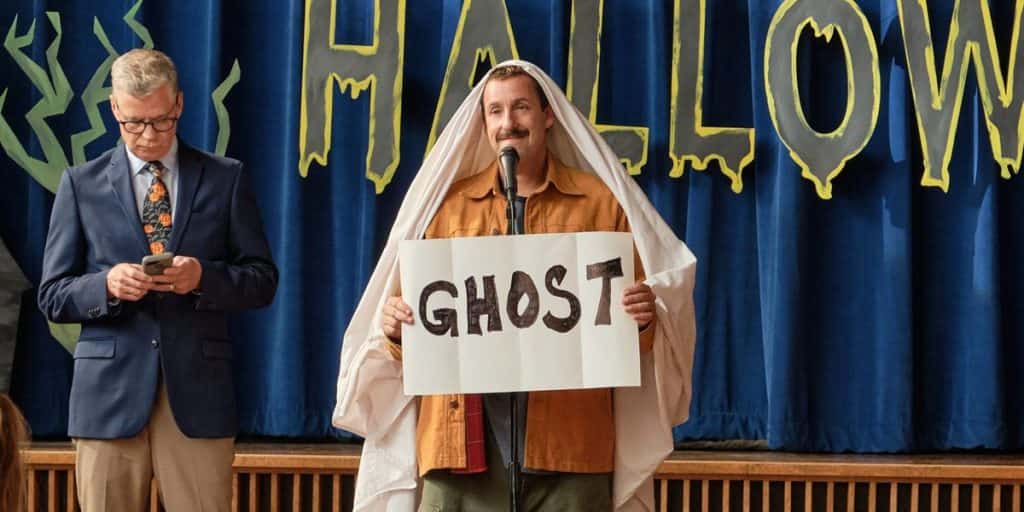 Halloween, a time of year as horrible as Christmas when it comes to tie-in films to the holiday season. It doesn’t help that I strongly dislike Halloween, the shoddy costumes, the excuse to drink, and all the trick or treating. Slamming their hands into my door, begging me for sweets and chocolate and money. Not on my watch, I’ll be staying indoors watching Netflix’s latest feature, Hubie Halloween. A film tailor-made for the holidays, the Christmas Chronicles of the spooky season. I wouldn’t have thought the salvation 2020 needed could be found in a film directed by Steven Brill, collaborating once more with the man we love to mock, Adam Sandler.

Once more playing a character ostracised by the community (and rightly so), Sandler stars as the titular Hubie. He’s a silly-voice, bumbling buffoon, a flashback to the early days of his SNL stints. He startled audiences with Uncut Gems, a surprise role that broke his typecast, but it was inevitable he’d return to toilet humour, costumes and celebrity cameos. A man who loves Halloween, but is terrified by the slightest of scares, it’s a dumb trope, but one that allows the film to stagger through its running time. All the expected gags are in there, as Sandler rounds up the likes of Steve Buscemi, Ray Liotta, and Maya Rudolph to appear in underwhelming supporting roles.

Cheap writing should be a common theme for those watching Sandler’s films these days. He grinds you down, film after film of inane nonsense and horrid caricatures, all of them featuring Rob Schneider, who is well past his sell-by date. Eventually though, he’ll wear you out to the point of genuine fatigue, and you’ll fall right into his trap. Perhaps it’s specific to Hubie Halloween, but the writing is rather enjoyable. Poor dialogue balanced out with a genuinely fascinating performance from Sandler. Sight-gags that make up for a redundant, almost non-existent plot. Twists and turns here that just don’t make any sense, it’s a surreal narrative, to say the least, but it feels entirely accidental. The thrill of watching this comes from engaging with a film consistently throwing itself at rock bottom. It’s very messy at times, there are a bunch of unfinished subplots that linger around the edges, but the humour found within makes up for a great deal of these hindrances.

Hubie Halloween knows its audience well. A predictably messy piece of film where Sandler and his friends fumble around for an hour and forty minutes, all of it on Netflix’s time and money. I can condone that behaviour if it sucks away from the talent void of Netflix. Hubie Halloween isn’t bad, and it’s far better than it has any right to be. Aspects that simply shouldn’t work are wrapped in the wholesome charm of Sandler’s childish humour, which is ageing like a fine wine. Bizarre enough to work, with enough ridiculously dumb moments strung together in quick succession, this’ll be a riot of a watch with friends, even if the quality is lacking from time to time.