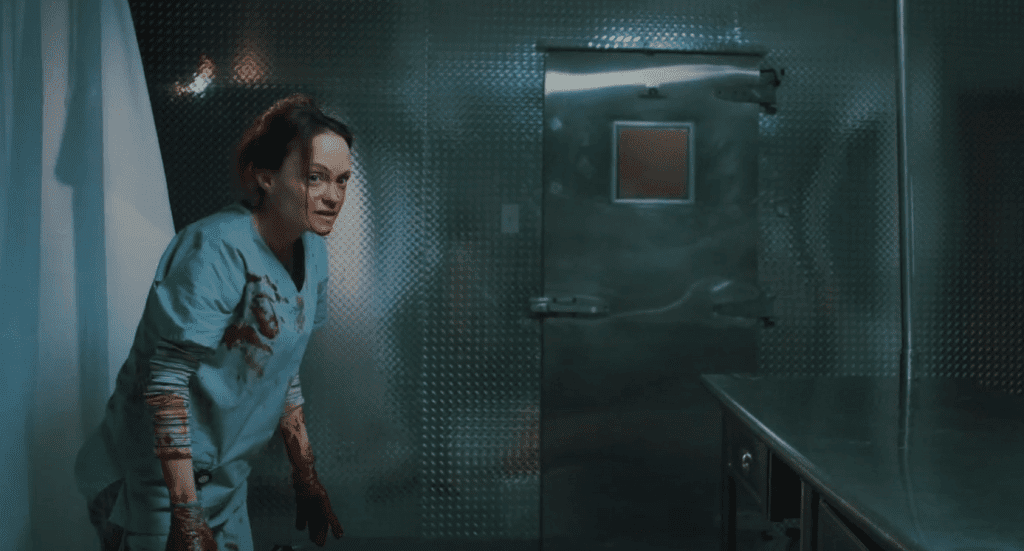 The encroaching creepiness of the night shift captures all types of seedy, horrid individuals. Cinema would like you to think that, anyway. Martin Scorsese took a crack at it with Bringing Out the Dead, an amazing portrayal of sleep deprivation and what is needed to survive on the job. 12 Hour Shift, this latest feature from director Brea Grant, details a seemingly ordinary shift for a group of nurses. Inevitably, everything goes wrong, and, surprisingly, 12 Hour Shift can keep itself afloat after only an hour and a half of confusing content.

Having not appeared in anything of particular interest this century, Angela Bettis seems to be on the path of resurgence with 12 Hour Shift. Nabbing herself a leading role as Mandy, a junkie nurse looking to make it through her shift at an Arkansas hospital. It’s 1999, and the shift, alongside the heist, is on. Bettis’ performance as our anti-hero is certainly solid, a malignant individual that uses drugs, drink and chemicals to keep herself from swaying into emotional distress. She’s as far away from human concern as possible, a cocktail of medication, fatigue, and psychological disconnect from her patients makes for a compelling, horrible individual, but room for a great performance to blossom. It’s promising, but never hits the ground running.

All of it appears to be on the side of lower-budget filmmaking. A shaking camera, strange lighting that doesn’t match up with the monotone backdrops of a small hospital. The graveyard shift mentality is captured rather well, it has splattering’s of Bringing Out the Dead to it, the manic spirality of its performers adds to that well. 12 Hour Shift tries to add wry charm and sleek comedy to a film that has some rather disappointing supporting performances. Chloe Farnworth’s efforts as Regina add the horror elements to this showcase of hospital turmoil, but they’re of little interest and are vaguely underwhelming. It may be worse still that it’s all so forgettable, and considering the talent on display, it’s surprising to see how underutilised they are.

At times, sitting through this felt like I was on shift. My eyes bleeding and twitching as I watch David Arquette desperately cling to his star power, like a guinea pig clutching a ceiling fan, as we watch him take just about any role he can get. A tremendous soundtrack can only hide so much, and the rather repellent aspects make a stench that becomes unavoidable as the film attempts to ramp up the drama. 90s pop references, from Y2K and Beanie Babies to the inclusion of 90s stars like Mick Foley and the aforementioned Arquette. The horror is weak and futile, the comedic moments are few and far between. It’s a shame, because, for all its stumbling, 12 Hour Shift has good performances at its core.