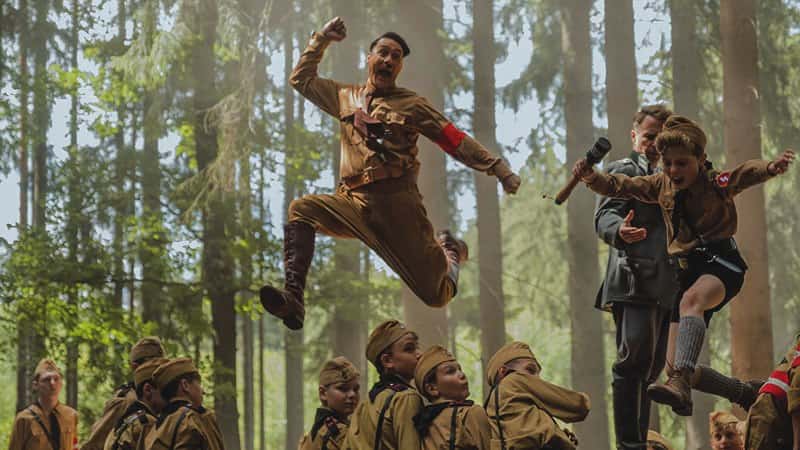 Convinced that this would be my choice for best film of the year, I had high hopes for Jojo Rabbit, the latest comedy feature from director Taika Waititi. I’ve not exactly had the chance to truly appreciate the work of Waititi just yet, it has something to do with him not crafting a film worth talking about for more than a few seconds. Conversations about his previous films What We Do in the Shadows and Thor: Ragnarok can be boiled down to highlighting one of the two funny scenes in either movie, and moving on from there. At least they are, on the whole, generally enjoyable and funny movies though, and his latest feature Jojo Rabbit looks to follow an identical suit to the previous films in his body of work.

A boy indoctrinated into the Nazi tirade during the second World War finds himself advocating for the Axis forces as his imaginary friend, Adolf Hitler (Taika Waititi) encourages him to serve the German army. His world view is shaken thoroughly when he finds a Jewish girl, Elsa Korr (Thomasin McKenzie) in his attic, and is at odds with what to do. A thoroughly entertaining premise held up by the inclusion of some brilliant actors including Scarlett Johansson, Sam Rockwell, Stephen Merchant and Rebel Wilson.

Where Jojo Rabbit went wrong exactly is beyond me. I’m a big fan of political satire, and throwing history themed satire into the mix should’ve been a recipe for success. Waititi’s impersonation of Hitler is spot on, pooling together childish narcissism that looks to capture the imagination of a child and the dim-witted teachings of the Nazi’s during the Second World War. Most of the jokes within the film boil down to just that though, and it soon becomes apparent that much of the movie is devoid of belly-aching laughter and instead composed entirely of light chuckles.

Once you’ve seen Waititi dressed as the evillest man to have ever lived once, the oddly disconcerting charm has just about worn off an hour into the film. His sporadic appearances are often derailments to a plot that could potentially be one of the strangest coming of age movies I’ve ever seen. The writing is concise, presenting a nice debut performance from Roman Griffin Davis as the titular character. Davis’ performance is great, seeing him brush shoulders with some great performers really aids his performance in all the necessarily needed avenues. Johansson and Rockwell in particular are great supporting players to his performance, showcasing their ability to just about knock a great performance out of the park when they’re handed inconsistent material.

It’s difficult to judge a comedy movie, not just because they’re all so subjective, but also because I’d seen all of the best jokes in the trailer. Aside from Stephen Merchant’s one, extended scene snooping around Jojo’s house, there isn’t really much else that will get a kick out of audiences that you can’t find within the trailer. The effective energy I had been expecting soon turns into an attempted feel-good filler movie, with the last half hour devoted to developing numerous supporting characters in the hopes that latching onto your heartstrings will give you that little extra push over the finish line.

A sad shame, but certainly a movie worth watching. Even with its inconsistencies in the comedy department, Jojo Rabbit could easily be considered one of the better comedy films to come out of this year. Not because it’s anything unique or spectacular, but solely on the grounds that it’s not as bad as any of the other comedy movies to release this year. Some nice direction is scattered throughout, but it’s futile when the script doesn’t quite reach that ever high standard of being a comedy movie that will knock you down laughing, yet leave you wanting to return to it as soon as possible. Jojo Rabbit provides neither, if anything, it provides a small bit of filler for a lazy afternoon.