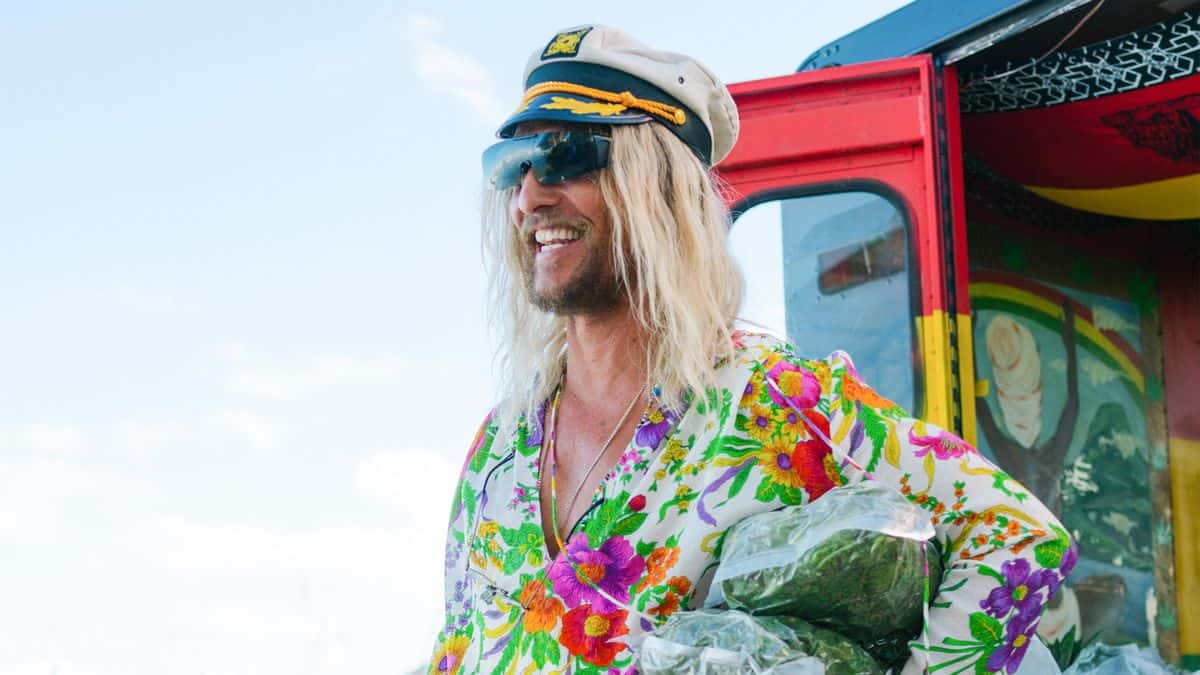 I’ve always wondered why I liked Spring Breakers so much, its inclusion of Skrillex certainly wasn’t a positive talking point for when I’d finished watching Harmony Korine’s arguably most mainstream work. Heading into The Beach Bum without really knowing which tropes Korine likes to stick with should’ve provided me with some entertaining content that would both shock and amaze, especially after how great Spring Breakers was. Instead I received what I had feared most, a film with too much going on and lacking entirely in substance, direction or narrative structure. Very much a vanity project for Matthew McConaughey (and seemingly an excuse for him to look a bit like Joaquin Phoenix in Inherent Vice).

The film follows Moondog (McConaughey) a beach bum. Do you get it? The Beach Bum. Our main character is a literal bum, living in and around the sandy shores of some beach in America that’s easily recognisable if your geography knowledge exceeds that of a four-year old child. I don’t have such a luxury, but if you think you’re going to go more than ten minutes at a time in this film without being reminded what a kooky, loveable guy Moondog is, you thought wrong. Korine and McConaughey must’ve believed the only way to make this film enjoyable is to try and shoehorn in as much depth and personality into a man that has only two-character traits. Drug addict and hippie aren’t entirely the character traits that we’ve come to rely on in the modern movie world, so it’s oddly fresh to see a director even attempt to bring them back into the mainstream.

It doesn’t work, as expected, but what I admire about Korine is that even with misfires such as this, there’s still an odd level of charm to his work. Some of the dialogue throughout is rather enjoyable and there are a handful of supporting plot points that could’ve made for some truly inspiring content had they not been stapled right to the end in a last-ditch attempt at making this a feel-good feature. Under the stress of having a budget as big as Spring Breakers, Korine throws as many stars into his picture as he possibly can. We hang around with Snoop Dogg, Isla Fisher, Zac Efron, Jonah Hill and Martin Lawrence all in brief splattering’s of filler ranging from awkwardly hilarious to embarrassingly boring.

All of this mediocrity is brought front and centre with a moderately enjoyable performance from McConaughey, who has suffered at the hands of playing a character that is truly quite difficult to like. Moondog aspires to be taken as loosely as possible, yet the severity of his character and seriousness of the approach is quite the convoluted ideal. Maybe he was just having the occasional off day, but McConaughey jumps through expected hoops to varying degrees of success. He sometimes breaks through with a performance that puts to rest the notion that his best days were behind him; unfortunately, in doing so he sets the bar too high and ends up in a performance that brings to the light the best and worst features of his typical performing style.

The lack of continuity adds that Korine stench, something that worked well in Spring Breakers, however here it feels wasted on a group of characters that are overly jarring with reality and entirely unlikeable. An assembly of disjointed characters that would be better suited to a sketch show format given how uninterestingly paced this piece of film is. Between this, James Franco and Paterson, I’m beginning to think movie directors and actors simply cannot write poetry. That being said, sometimes acting is poetry in motion. I wouldn’t call Matthew McConaughey smoking massive joints, cheating on his wife and hanging around with Snoop Dogg poetry, but I’d certainly call it a decent yet forgettable time.