Added on 21st December 2018  Richard Bellis  Arachnids in the UK , Battle of Ranskoor Av Kolos , BBC , Demons of the Punjab , dr who , It Takes You Away , Jodie Whittaker , Kerblam! , Rosa , Series 11 , The Ghost Monument , The Tsungra Conundrum , The Witchfinders 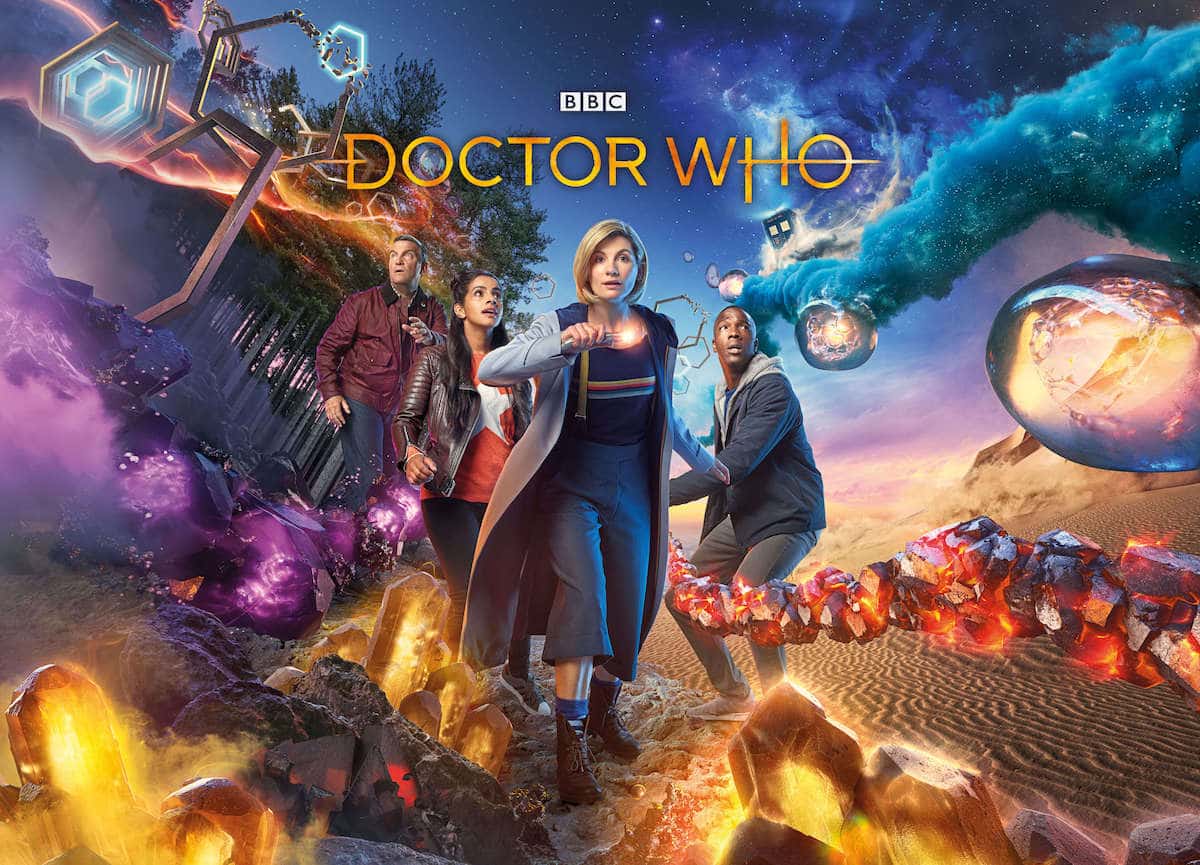 After a great first episode that featured some of the best writing we had seen in a long time, I thought the show was going to keep up the momentum and give us a run of excellent episodes. I thought it would be quality over quantity and I think series 11 has left some, me included a little disappointed, with some calling it the ‘worst series so far’

I’ll go through each episode individually and give a short review:

When I first saw this episode, I was amazed: it was the first off-earth outing for the new companions and it really felt like it, the planet actually looked alien instead of a quarry in Wales.

The second time I watched it I found it boring: nothing happens, the doctor finds the Tardis which just happens to be the ghost monument that’s it. The budget must have gone on filming in South Africa because there is not much good I can say about this episode. It is said everything on the planet is designed to kill, from the air to the water, so why not show some danger? The ‘bad guys’ of the episode were some sniper bots that have the accuracy of stormtroopers, and a bit of cloth that can talk. Disappointing.

When they do get to the Tardis, we see it has a new design. Basically, it looks like a cave. It is said that it is supposed to reflect Sheffield but as far as I am aware there are no crystal caves in Sheffield; the only thing that is vaguely Sheffield is the use of steel on the walls but that’s it. I’m not a fan.

This is the first historic episode of the series and the attention to detail that the budget allowed was amazing. It looked like a Hollywood film, with the sets, the costumes, the environment all evoking 1950s America. It was also great to see the new companions getting used to time travel.

The hatred that Ryan faces in the first few minutes because he is black and is attacked for picking up a lady’s handbag and giving it back to her was a very serious and well done moment. I liked how Ryan and Yaz then reflected on how things maybe not be perfect in 2018 but are a lot better than what it was in the 1950s, thanks to people like Rosa Parks.

I also liked it when Graham realised he was part of history and was part of the moment when Rosa was asked to move but refused; he did not want any part in it but, even if he didn’t want Rosa to get up, the law is the law and she was forced to give up her seat anyway.

There were still things I did not like about this episode. The villain was useless and did not really need to be there: a time-travelling white supremacist from the 27th century, who travelled back to the 1950s to stop Rosa from getting on the bus and taking a stand. The whole plot was about getting Rosa in the right place at the right time and this could have been done without the need for an antagonist. Also the modern pop song that plays as Rosa is escorted off the bus ruins the entire moment: sometimes, silence is golden.

Episode 4 – Arachnids in the UK:

A boring episode with the wrong title. It should have been called Spiders in Sheffield.

An American businessman who is ‘definitely not Donald Trump’ is the main antagonist as he created his hotel chain on a waste dump and the spiders mutated from it. He is made out to be a bad guy and a coward all throughout the episode, however he talks sense. The doctor realises that the spiders have got too big and are suffocating due to their size, so the businessman shoots one, which puts it out of its misery quickly (as most animals in pain are). The Doctor’s idea is that because they are living creatures they should be treated humanely – yes, by locking them in a safe room and letting them suffocate. Nice one, Doc!

Also, this is the only time they really return to Sheffield, I guess it was too boring.

This episode was terrible, and is now the lowest rated modern Doctor Who episode. It was okay at first, the premise of being stuck on a space ambulance with no way off while a mysterious creature attacks was good. Jodie Whittaker also felt like she was becoming more comfortable as the Doctor and it was good to see the companions getting used to the travelling.

However, this episode was let down by a boring cast of characters and a stupid villain in the form of a Peting – a small CGI blob that ate anything – it looked like something from Ben 10. This episode could have been so much better but they messed it up.

This is by far the best episode of of the series. The Doctor gets a distress call from a planet-sized warehouse in which someone needs help. So, they travel to Space Amazon Warehouse and do some investigating.

The supporting cast included Lee Mack, who was excellent but underused: he was only in the episode for the first 15 minutes. The plot was great, the companions were put to good use and the robots actually had a creepy look about them and probably scared a few children. I’m not going to spoil the twist in this one because its actually quite clever.

However, a cynic would say that this episode portrays Amazon and other such companies in a good light, especially since this episode aired just before Black Friday. Make sure you buy your Doctor Who Merchandise, viewers!

Episode 7 – Demons of the Punjab:

Another historical episode, set during the partition of India in 1947 on its new border with Pakistan: again, this episode was very Hollywood and clearly had a big budget. It gave a good idea if what life was like 70 years ago in India, and the struggles between Hindus and Muslims in the region.

Yaz’s mother recalls the struggles she faced as a Muslim wanting to marry a Hindu, the partition acting as a serious threat to her marriage. The Doctor though was just annoying this episode: at one point I felt that they could have taken the character and her companions out of the story and it would be better – just not Doctor Who. The demons turn out to be an ancient alien race who used to be assassins but now only come to mourn those who die alone: the real antagonists are the people.

This episode was good but predictable: we all knew that the new female Doctor would be accused of being a witch, but I think it was handled okay. Obviously she wouldn’t be killed, she’s The Doctor and she’s signed on for another series.

The villains are an odd mud race that possesses the dead.  They seemed interesting but very underdeveloped and could have been used better, perhaps with a chance to attack the village or attack the king.

Alan Cummings is the best thing in this episode and one of the best performers in the series. His portrayal of James I was brilliant, and he outacted everyone, stealing the show whenever he was on screen.

I think this episode had some good ideas but they were not fully utilised and it only scores highly due to Alan Cummings.

Episode 9 – It Takes You Away

This episode started off promising: a girl is abandoned in a house in Norway, her dad has gone missing and strange noises coming from the forest. A perfect set up that got weird. The Tardis crew arrive and, after The Doctor’s unfunny banter, they get to work finding out what happened to her dad.

It turns out a mirror in the wall leads to a ‘dead zone’ which acts like a buffer between universes. The dad had gone into a different universe as his wife was still alive in that one.

The Doctor, Graham and Yaz investigate and meet some alien who could have been interesting but is killed off, predictably, as he did not want to help The Doctor for free and everything had a price (seems fair when you need to survive in the space between universes). They then find the alternate universe and her father who is given a stern talking to for leaving his daughter for his wife.

The episode goes mental however when Grace shows up, Graham’s wife from the first episode. Graham has an emotional chat with her, but there is a big twist which was I think was very risky and, in my opinion, did not pay off.

The alternate universe is actually sentient and alone so it takes the form of loved ones to get people from other universes to inhabit it so that it is not lonely. The Doctor asks it for its preferred form and it turns into a frog on a chair. I think Dr Who finally lost it here, although I did like it that Ryan finally calls Graham ‘grandad’, which he has wanted all series. That was cool.

This was the most disappointing finale episode, I have seen some letdowns in final episodes over the years and this one topped the bill. There was no battle, the antagonist was Tim Shaw from the first episode, and the plot is the same as Stolen Earth from series 4.

Tim Shaw has exploited the UX, a godlike race who can bend the universe with thought. They now worship Tim Shaw and he demands them to steal planets for his planetary weapon to wipe out his enemies. The Doctor stops him and frees the Ux from slavery.  I found it odd how The Doctor disapproved of Graham’s intention to kill Tim Shaw, despite the fact that he’s a genocidal maniac, only alive because you let him live and now, he has stolen 4 planets!

However, this had a good pay off with Graham shooting Tim Shaw in the foot and trapping him in a hyper sleep pod for eternity. I was slightly worried for Graham, but then I realised Bradley Walsh is signed on for the next series.

There was little build-up to the finale because of Chibnall’s decision not to include a series arc, which had become overcomplicated in the Moffat era. However, this meant that the episode just came and went, and that was that: the end of the series. I also think the budget was running low because there were a lot of close shots indoors; they had about 3 different sets for this one that looked very similar.

Again, with this episode the guest actor outacted everyone. Mark Addy put in a great performance with what he had and it’s a shame we probably won’t see his character again.

So that was the series: disappointing overall with very few highlights.

However, Chibnall has promised a blockbuster of a New Year’s episode, then there will be no Dr Who until 2020. Let’s hope they use that time to come up with some better stories.